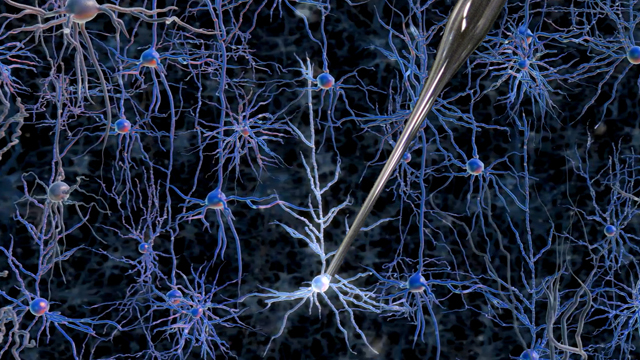 THE DEVICE: Whole-cell patch clamping, a Nobel Prize-winning technique to record the electrical activity of neurons, has never looked so good. A shoebox-sized robot lowers a thin glass pipette, its tip sharpened to 1 micrometer in diameter, into the brain of an anesthetized mouse. The robot moves the pipette around inside the brain, almost imperceptibly, hunting for neurons. When the glass tip bumps into a neuron, the robot arm instantly halts and applies suction through the pipette to form a seal with the cell membrane. Once attached, the pipette tears a small hole in the membrane and records the cell’s internal electrical activity.

The automated process performs in vivo patch clamping faster and more accurately than manual patch clamping, which involves the physical manipulation of a... “By adding in a robot, this will make [in vivo patch-clamping] much more accessible to someone who might not have considered it before,” said Derek Bowie, who studies neuronal receptors at McGill University in Montreal, Canada, and was not involved in the research.

WHAT’S NEW: The idea is simple: record the electrical activity of a single neuron in a living brain. The execution is not: it takes researchers months to learn the technique, and even an experienced patch clamper records only 2-4 successful readings per day. The process is so laborious, in fact, that only around 30 labs in the world perform whole-cell patch clamping in vivo (though others do it in a dish). But researchers have continued to use the technique for over 30 years because of its value. “This is a really powerful technique for identifying the type of neuron you’re looking for, determining the electrophysiology of a diseased neuron, or figuring out how a drug affects the firing of a neuron,” said coauthor Craig Forest, director of the Precision Biosystems Laboratory at the Georgia Institute of Technology. “But it’s really, really hard.”

The new patch-clamping robot makes an in vivo recording in just 3 to 5 minutes, detects cells with 90 percent accuracy, and achieves a successful seal with the cell membrane about 40 percent of the time. Overall, the machine, produced in collaboration with researchers at the Massachusetts Institute of Technology, is about 50 percent more successful than an individual manually attempting to make a recording, said Forest.

IMPORTANCE: Robotics has made a major impact on many fields of biology, but it has rarely been applied in neuroscience, said Forest. “We’re excited to bring robotics into the living brain,” he said. The team has already begun to use the robot in collaboration with the Seattle-based Allen Institute for a 10-year project to catalog all the types of neurons in the mouse brain.

The robot design is freely available at autopatcher.org, or an assembled robot can be purchased through a spin-off company, Neuromatic Devices. The robot can be set-up and used in a single day, said Forest—a dramatic difference from the 6 months typically required to train a graduate student or postdoc how to do the technique by hand. “I guess postdocs can now just sit at home or on a beach somewhere,” said Bowie with a laugh. NEEDS IMPROVEMENT: The technique could be made even more useful if combined with another new tool called shadow patching, said Bowie. Shadow patching, developed in 2008 by Michael Häusser and colleagues at University College London, involves spraying the extracellular space around a neuron with a fluorescent dye in order to visualize the shape of the cell.

The MIT/Georgia Tech team has already modified the robot to perform a similar technique: rather than injecting dye into the extracellular space, the robot injects the die into the neuron itself to visualize its shape, said Forest. The set-up can also be tweaked to extract DNA to sequence a cell’s genome. Now, the researchers are working on increasing the number of electrodes operated by a single robot so as to record from multiple neurons at the same time, and trying to streamline the process so that a single operator can control multiple robots simultaneously. “We’re open to collaborating with folks who want to take this in new directions,” said Forest.