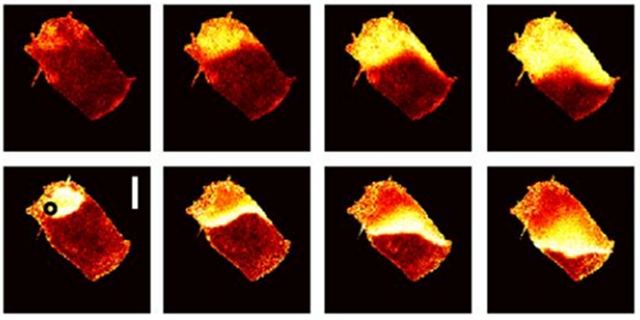 THE DEVICE: A complex interplay of signals governs the heart’s rhythm. Voltage changes and calcium flux are both important in controlling heart muscle function, with each signal influencing the other’s dynamics. Scientists at the University of Oxford have created a single camera system that can capture the dynamics of these signals simultaneously, yielding important insight into their relationship.

Peter Lee and colleagues combined several colors of light emitting diodes (LEDs) with a multi-band emission filter so that one very high speed camera could capture the different wavelengths of light emitted by various fluorescent dyes. By using different colors of LEDs, they were able to stimulate different dyes to measure changes in calcium and voltage across cardiac tissue or single layers of human cardiomyocytes (created from induced pluripotent stem cells). IMPORTANCE: Because calcium and voltage changes interact to control cardiac function, and perturbations in either leading to dysfunctions like arrhythmia, Lee’s camera system provides researchers with a tool to further investigate the interaction between the two signals, and thus gain a deeper understanding of cardiac function.

Using a single camera with multiple emission filters also allowed Lee and his collaborators to “measure calcium properly,” Lee explained. Many previous experiments used high-affinity calcium dyes, which bound strongly but could perturb the signal. The strong LEDs allowed for weaker-binding dyes, and “ratiometric” calcium measurement, meaning the dyes display shifts in emission wavelength upon binding calcium. Researchers can then quantify the concentration of calcium based on the light emissions they detect and calcium flux simultaneously.

Additionally, explained Lee, the simplicity of the system makes it more easily scalable. LEDs are cheap and perform well, and the lack of moving parts makes setup much easier than multi-camera systems that need careful calibration.

NEEDS IMPROVEMENT: As appealingly simple as a one-camera setup is, a single camera and multiple light sources can also introduce new hurdles, explained Salama. Because one camera is being used to capture multiple parameters, this cuts down on the number of image frames that can be devoted to each signal, noted Salama. For example, if a camera is running at 1,000 frames per second, but imaging four signals, only 250 of those frames would capture each parameter.

Salama also feared that lining up the LEDs and camera might result in the different light sources hitting the cardiac tissue at different angles, and bouncing off at different angles, making it difficult for the camera to capture them all. When visualizing the voltage and calcium propagations over a single layer of cells, scientists need to make sure the emissions they’re comparing are coming from the same location—so they aren’t trying to match voltage changes in one set of cells with calcium fluxes in another. When imaging microscopic-scale changes, Lee works around this problem by merging the lights into one path and using an optical fiber to direct all the colors to one site.

So far, the new camera setup only images one sample at a time, but Lee is working to build a high-throughput system, envisioning its use as a screening tool that could help visualize how drugs affect signal propagation in an array of myocyte layers or cardiac tissue. He is also designing custom emission-band filters, so researchers can visualize more parameters with different dyes, like pH or mitochondrial potential. “Where we’re headed is expansion,” Lee said.