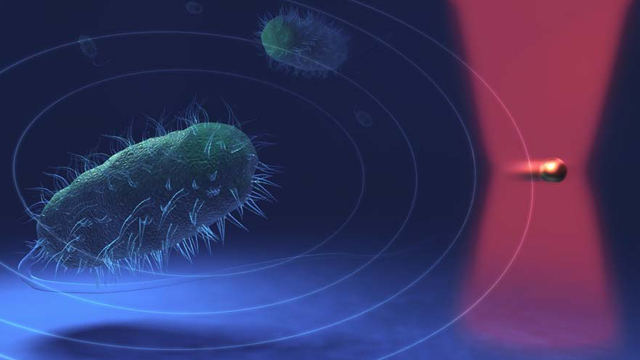 A newly developed method might be able to detect sound waves produced by bacteria and other nano? and micro-objects NANOSYSTEMS INITIATIVE MUNICH

THE DEVICE: If a bacterium belches in a petri dish, does anyone hear it? In the January issue of Physical Review Letters, researchers at LMU Munich in Germany describe the world’s tiniest ear—an apparatus for the ultrasensitive detection of sound. By tracking the displacement of a levitating gold particle trapped in a focused laser beam, the team recorded the acoustic vibrations of nearby nanoparticles. The researchers were also able to determine from which direction the sound came.

The researchers estimate the nano-ear can detect sound levels as low as -60 decibels, making the device a million times more sensitive than human hearing. “We were wondering what happens if something disturbs this motion, for instance a sound wave,” said first author Alexander Ohlinger. “If it’s possible to detect that disturbance, we could use [the optical tweezers] as a microphone.”

Ohlinger and colleagues tested their theory in two experiments. First, they recorded the trapped particle’s response to a relatively strong sound source—a needle vibrating on a loudspeaker. Next, they detected the significantly weaker acoustics of a patch of vibrating gold nanoparticles, being heated up by a laser (see image above). In both instances, the acoustic waves were detected accurately.

IMPORTANCE: The nano-ear could open up a whole new field of “acoustic microscopy,” said Ohlinger. Using optical tweezers, scientists might be able to listen in on bacteria, viruses, and even cellular processes like DNA replication and mitosis.

The technique is highly accessible, as all the tools that were used—lasers, nanoparticles, a dark-field microscope, and an ordinary video camera to record the movement—can be readily acquired by a lab, Ohlinger added.

NEEDS IMPROVEMENT: Before the technique can be applied to biological systems, however, work must be done to reduce the signal to noise ratio, said Lene Oddershede, head of the optical tweezers group at the University of Copenhagen, who was not involved in the study. “When you’re at the nanoscale, noise is a really big player. It’s everywhere,” she said. With the noise-to-signal ratio reported in the paper, these extraneous noises could affect the intended measurements. “However, I do believe the signal-to-noise ratio can be improved,” Oddershede said.

The LMU Munich team is now performing studies applying the nano-ear to different systems, said Ohlinger. They would like to record the sound of micro-sized objects like cells, but first have to determine if the technique can record sound waves that are not periodic, as in their experiments, but random and messy. “We have to refine our method, but in principle, we hope that it’s possible to use in biology,” said Ohlinger. “This is all research in progress.”