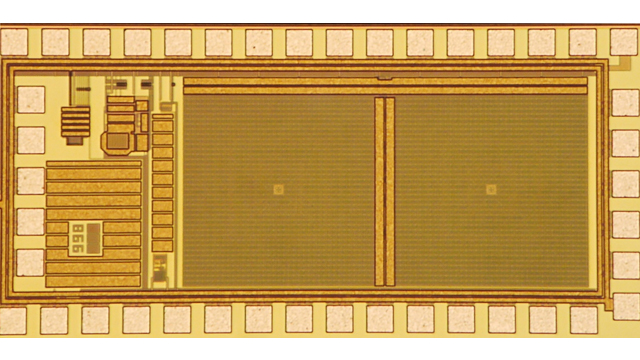 THE DEVICE: The Planar Fourier Capture Array (PFCA) is a big name for a tiny camera. At 100th of a millimeter thick and one-half a millimeter on each side, the microscopic device has no lenses or moving parts, but is instead made of 4,000 light sensors—the same thin silicon pixels used in computers and retail cameras. The PFCA costs just pennies to make and could be used in an array of scientific applications, from surgery to cell imaging, the developers say. Image of the Mona Lisa (top), and reconstructed by the PFCA (bottom)
COURTESY OF ALYOSHA MOLNAR, CORNELL UNIVERSITY

WHAT'S NEW: In 2007, Taiwanese electronics company Misumi claimed to have made the smallest camera ever: the “snake camera”—a cylinder measuring 4.4 millimeters by 15...

But the PFCA leaves both cameras in the dust. It is able to be so small by sidestepping the use of lenses or mirrors to focus light and instead relying on the collection of incident light. Each sensor in the camera is overlaid with layers of metal grating that diffract light, so each sensor captures incident light from some directions but not others. That light information is then analyzed using a mathematical principle called a Fourier transform to combine the information from many sensors into a single, low-resolution image.

“The history of lensless cameras is long,” David Brady, director of the Imaging and Spectroscopy Program at Duke University who was not involved in the research, said in an email, but the PFCA is especially interesting for its use of metal components on the sensor to resolve light beams.

IMPORTANCE: The PFCA isn’t going to take your next family portrait, but it may shed light on previously hard-to-see things, such as small spaces in the body. The camera is small enough to affix to the tip of a needle used during surgery, said Alyosha Molnar, lead investigator on the project at Cornell University in New York, so doctors could look at a tissue before cutting into it. The silicon is also flexible, so the camera can be made into any desirable shape.

In addition, the PFCA was originally designed as part of a 3D imaging tool, several arrays of cameras placed on every side of an object to take snapshots from each direction and combine them into a 3D image. Molnar and colleagues are still developing this application as a cheap alternative to today’s 3D microscopy. ‘We’re never going to compete with the best microscopes in terms of resolution,” said Molnar, “but they all cost tens of thousands of dollars, and this would cost five bucks.” NEEDS IMPROVEMENT: “The camera as developed is not competitive with existing technologies for any particular application,” said Brady, “but it is an interesting demonstration of the potential for integrating novel functions in light detectors.”

One limitation of the camera is that the metal mesh on each sensor actually absorbs a lot of light, Douglas Lanman, a researcher at the MIT Media Lab who was not involved in the research, said in an email. “A stack of two such gratings only passes 25 percent of light at best,” he noted, so a long exposure or a bright light is needed to achieve a discernable image.  The team hopes to alter the metal layers to let in more light, and thus capture more information, said Molnar. Molnar also hopes to add color filtering to the process. Right now, all the camera’s current images are black and white or green and white.

And, believe it or not, Molnar wants to make the camera even smaller. “Resolution is hard, but size is easier,” he said with a laugh. “The pixels we use are quite large, by pixel standards, so we could probably reduce the size by a factor of 4 to 10 without too much work.”