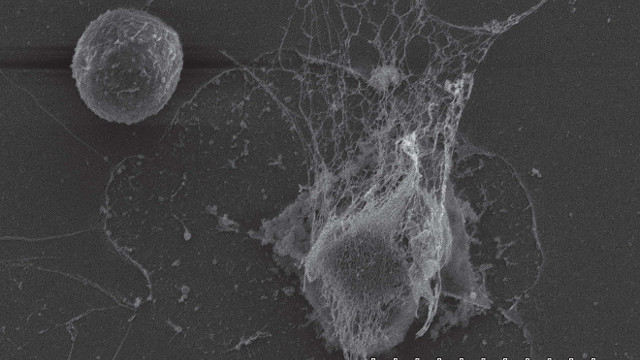 The study shows “that aggressive metastatic cells from breast cancer have this ability to induce a particular function of neutrophils, which is the production of NETs,” said cancer biologist Ilaria Malanchi of the Francis Crick Institute in London who was not involved in the work. “But the more exciting part of the work is that they found a strategy to target this pro-metastatic activity of neutrophils,” she added. “More research is always needed to see if this...

Neutrophils, the most abundant type of white blood cell, are innate immune cells and the first line of defense against infection. But in terms of cancer research, these cells have received considerably less attention than other immune cells such as macrophages or T cells. And the few studies of neutrophils in cancer have given mixed results, noted Mikala Egeblad of Cold Spring Harbor Laboratory in New York who led the new research. “There were studies where the neutrophils appeared to kill the cancer cells and others where the neutrophils were helping the cancer cells to spread,” she said.

Figuring out whether neutrophils help or hinder cancer spread is important, Egeblad added. Chemotherapy regimens can inadvertently kill-off neutrophils, and to treat such life-threatening neutropenia, patients are sometimes given neutrophil-boosting drugs. If the cells are actually aiding cancer, however, increasing their numbers might have unintended consequences.

Examining tissue samples from patients with breast cancer, the researchers found evidence of NET formation at both primary tumors and secondary metastatic sites in the lung. And the more aggressive the tumor, the more likely the tissue sample was to have NETs, the team showed.

In cultured cell studies, the researchers found that neutrophil NETs improved the invasiveness of metastatic breast cancer cells, and that treatment with the DNA-degrading enzyme DNase I could negate this invasion-promoting effect. To test the potential of this treatment in live mice, they coated nanoparticles with DNase I and injected the particles into animals that had previously been injected with metastatic breast cancer cells. Sure enough, the particles could largely block the spread of the cells to the lungs—a common secondary site for breast cancer. Three of the nine DNase I-treated mice had no lung metastasis whatsoever, while the remaining six had considerably reduced lung metastasis compared with the ten control mice who received nanoparticles without DNase I.

“In a sense they have come up with a drug,” said Zvika Granot of the Hebrew University of Jerusalem who did not participate in the research. “You give this [nanoparticle treatment] and, at least in mice, you block metastatic spread. It’s quite impressive.”

It’s not yet clear how NETs promote cancer invasion, but Egeblad and colleagues propose that the DNA might act as a scaffold to locally contain protein-degrading enzymes released from the neutrophils. These enzymes would normally destroy trapped microbes during an infection, but in the case of cancer, they might destroy host tissues and thereby facilitate cancer cell access, Egeblad suggested. “The next step,” she added, “is to try to get deeper into what are these NETs actually doing.”