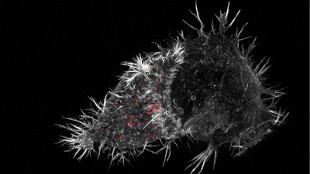 An oft-overlooked group of immune cells, natural killer (NK) cells seem to have a paradoxical role when it comes to viral infections—in particular, HIV. An analysis of NK cells from the blood of 13 HIV-positive women and matched controls published today (July 22) in Science Translational Medicine suggests that the more diverse an individual’s NK cell repertoire is, the more likely she is to contract HIV upon viral exposure.

Immunologist Catherine Blish and her group at Stanford University examined human NK cell diversity using a technique called mass cytometry (CyTOF), which allows researchers to examine dozens of surface proteins and other markers on individual cells at once. “You can’t calculate that diversity without having the CyTOF platform to look at all the markers,” she explained.

After grouping NK cells into around 30,000 subsets based on the combinations of NK cell-specific activating and inhibitory receptors displayed on...

To find out if the same thing would happen in people exposed to HIV, Blish and graduate student Dara Strauss-Albee analyzed blood samples from women who were part of a Kenyan study that tracked HIV exposure risk and incidence over time. The cohort included 25 women who contracted HIV during the study, 13 of whom gave blood before and after diagnosis.

Borrowing statistical techniques from ecology, Strauss-Albee came up with a computational method to assign NK cell diversity scores, which, according to results from cord blood, start at around 100 and stretch into the 700s for some adults. She used these scores to establish that NK cell diversity remained stable within healthy individuals followed for six months. This suggested that NK cell populations don’t fluctuate much and could be used as a biomarker of immune health.

The researchers calculated NK cell diversity scores from the last blood samples collected before HIV diagnosis for 13 patients who became infected with the virus, and compared the scores to those of healthy women matched for HIV risk score—an epidemiological measurement based on a person’s age and knowledge of partners’ HIV statuses, among other things. The researchers found that higher NK cell diversity scores correlated with an increased risk of contracting HIV upon exposure among the study participants, and that every 100-point jump in diversity score increased the risk 2.5 times.

“It’s quite surprising, and it’s also a bit counterintuitive,” said Eric Vivier, who studies NK cells at the Center for Immunology at Marseille-Luminy. For adaptive lymphocytes, like B and T cells, greater diversity typically means better protection against more pathogens.

“We think of diversity as a good thing in the immune system,” Strauss-Albee told The Scientist. “But that’s based on our paradigm which is shaped by adaptive immunity.” NK cells are components of innate immunity.

“Diversity in NK cells might be more of a side effect of the need to develop really short-term, robust responses,” Blish said. The NK cell response, she added, may just “throw the book at the virus” without selectivity or fine-tuning of receptor combinations as is seen in adaptive immune cell receptor-editing. Although the NK repertoire remained stable among healthy individuals in the study, Blish said it’s still not clear that the subsets accumulated over a lifetime are trained to respond to particular pathogens or encode any sort of memory. In the NK cell field, said Strauss-Albee, “there are very few dogmas.”

Exactly how NK cell diversity might influence HIV infection risk remains an open question. Esper Kallas, an immunologist at the University of São Paolo, Brazil, said that this study raises questions about the importance of NK cells as potential HIV immunotherapy targets.

Going forward, Blish said her team would like to test the relationship between NK cell diversity and HIV infection using humanized mice. In an effort to simplify NK cell diversity analysis, the researchers also hope to identify markers to represent major groups among the tens of thousands of potential subsets.

Another remaining question is how people appear to maintain NK cell diversity over time. Because NK cells turn over about every two weeks, Strauss-Ablee said, their receptor combinations and the frequencies of each phenotypes must be encoded, perhaps epigenetically. “That’s a very basic question that we still don’t know in NK cell biology,” she said.  “We have a lot more work to do before [NK cell diversity] can be a clinically important measure.”