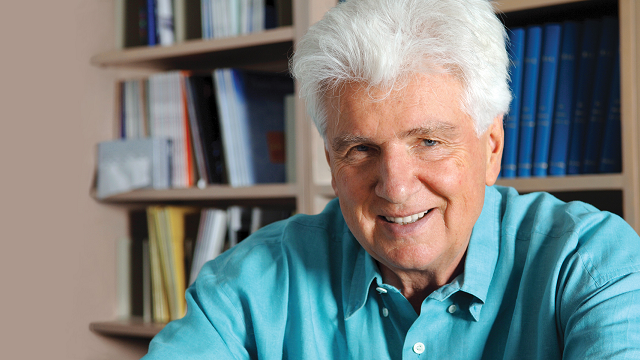 THE ROCKEFELLER UNIVERSITYBiologist Günter Blobel, who won a Nobel Prize in 1999 for his work on how cells organize the trafficking of proteins between intracellular compartments, died from cancer on Sunday (February 18) at NewYork-Presbyterian Weill Cornell Medical Center. He was 81.

“Günter was a towering figure in the scientific community who made fundamental contributions to our understanding of the most basic processes that underlie life on our planet,” Richard P. Lifton, president of The Rockefeller University, says in a statement. “His work revolutionized cell biology, demonstrating that seemingly impenetrable problems could be understood in molecular detail.”

Born in 1936 in the German town of Waltersdorf—now Niegoslawice in Poland—Blobel grew up among seven siblings in what he would later refer to as “a perfect 19th-century idyll,” until the family was forced to flee through Dresden as the Red Army advanced in 1945. Days later, Blobel witnessed the firebombing...

The family later settled in Freiberg, and Blobel studied for an MD at the University of Tübingen. After graduating in 1960, Blobel held a number of internships in German hospitals before moving to the University of Wisconsin, Madison, where he earned a PhD in oncology in 1967. He then started a two-year postdoc at The Rockefeller University, where he continued a long career in cell biology, from which he would never formally retire.

Working with cell biologist David D. Sabatini, Blobel laid the groundwork in 1971 for what would later be known as the signal hypothesis of protein organization. The researchers suggested, and it would later be demonstrated by Blobel and others, that many peptides possess a sequence of amino acids that direct each protein to a particular target organelle. This molecular ZIP code is a critical part of the cell’s organization of molecular traffic, and its dysfunction has since been implicated in a number of diseases.

In 1999, Blobel received the Nobel Prize in Physiology or Medicine for the research, and he used the prize money to help restore a baroque Lutheran church and a synagogue as part of his work with Friends of Dresden, a charitable organization he had established several years previously. “It was one of the great pleasures of my life to donate the entire sum of the Nobel Prize, in memory of my sister Ruth Blobel, to the restoration of Dresden,” he wrote in an autobiographical sketch after receiving the award.

Over the course of his career, Blobel also received the Albert Lasker Award for Basic Medical Research in 1993 and the New York City Mayor’s Award for Excellence in Science and Technology in 1997. He held the John D. Rockefeller Jr. professorship since 1992. “His loss will be felt deeply at Rockefeller and throughout the scientific community, where he was revered for his passion for science, personal generosity and inspired leadership,” Lifton says in the statement.

Blobel is survived by his wife of more than 40 years, New York restaurant owner Laura Maioglio.