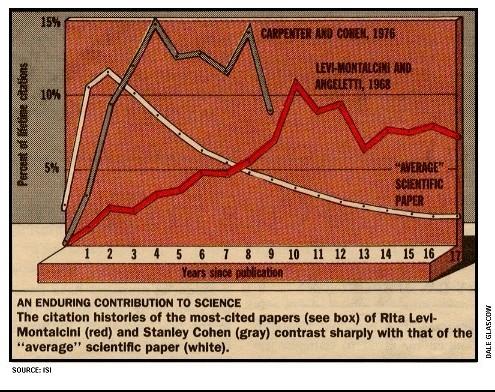 The Nobel Prizes are not the result of an election among scientists for "best scientist of the year."

But practicing scientists do pass judgment of a kind when they cite other scientists' work in their papers or build on that work to move into a new research area.

By that yardstick, this year's laureates are worthy recipients of the prizes from the Swedish Academy of Sciences. All the winners have published work that has been highly cited by their peers and which has led to important new areas of research.

Stanley Cohen of Vanderbilt University and Rita Levi-Montalcini of the Institute of Cell Biology in Rome jointly received the Nobel Prize in medicine or physiology for their discoveries of growth factors. The technique of citation analysis-recording and analyzing the number of times a particular paper is cited in the literature, and by whom-shows that their work has made a...