The number of birds in North America has declined by almost 3 billion since 1970, according to a study published today (September 19) in Science. The work, led by researchers at Cornell University, documents population reductions for hundreds of species and warns of an ongoing biodiversity crisis across the continent.

Paul Ehrlich, an ecologist at Stanford University who was not involved in the work, tells Science that the findings “might stir needed action in light of the public interest in our feathered friends.”

The researchers estimated changes in the populations of 529 species using long-term bird-monitoring databases. Those data showed that the number of individual birds across all of those species had decreased by 29 percent, from around 10 billion in 1970 to just over 7 billion in 2017.

“The datasets they used provide probably the best long-term, large-scale information on species abundances for any group of organisms anywhere in the world,” Natalie Wright, a bird biologist at Kenyon College who was not involved in the work, tells The Atlantic. “There’s always uncertainty, but if they are wrong, they are likely underestimating the magnitude of population declines.”

The team also examined 10 years’ worth of data from a network of 143 weather radars, which pick up avian migrations, and found a reduction in migratory biomass of about 14 percent since 2007. “Two completely different and independent monitoring techniques thus signal major population loss across the continental avifauna,” the authors write in their paper.

The results are particularly concerning because many of the species showing declines are not considered rare or threatened, but are widespread and potentially act as important contributors to food webs and ecosystem function.

“We expected to see continuing declines of threatened species,” study coauthor Ken Rosenberg of the Cornell Lab of Ornithology and American Bird Conservancy says in a statement. “But for the first time, the results also showed pervasive losses among common birds across all habitats, including backyard birds.”

More than 90 percent of the loss in abundance in the survey data was due to declines in 12 families, including sparrows, finches, and blackbirds. Some other species, including many ducks and birds of prey, instead showed net increases in abundance—possibly as a result of focused conservation efforts in recent years, the authors note.

The findings should be a “wake-up call,” study coauthor Adam Smith of the Canadian government’s Environment and Climate Change Canada says in the statement. Noting that many of the birds studied spend time in multiple countries within and beyond North America, he adds, “what our birds need now is an historic, hemispheric effort that unites people and organizations with one common goal: bringing our birds back.” 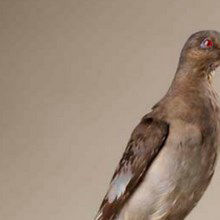