In two independent studies, researchers find that the organelle is responsible for a switch that allows cells to start moving when they’re squeezed.

In a pair of papers published in the same issue of Cell in 2015, two groups showed that putting physical pressure on cells—by confining them, for instance—causes previously stationary cells to start moving quickly. But it wasn’t clear how cells translated being squished into relocating. Many of the same researchers, again working in two independent teams, have now found that the nucleus is responsible for sensing changes in pressure and triggering the signaling cascade that leads cells to get moving. Both studies were published today (October 15) in Science.

“Even five years ago, people would shake their heads that the nucleus is nothing but a bowling ball inside of a snake. It was just this big, dense, unnecessary thing the cell had to drag along out of desperation because it had the DNA inside of it,” says Kris Dahl, a chemical engineer at Carnegie Mellon University who was not involved in either study. While there had been prior evidence indicating that the nucleus can pass mechanical forces from one side of the cell to the other, she adds, “these are the first papers to really show that . . . it’s actively contributing, sending signals to the cell to allow it to do things.”

“Similar to people, cells that make up tissues and organs in the human body are actually able to understand and protect their sort of personal space,” explains Alexis Lomakin, a cell biologist at the St. Anna Children’s Cancer Research Institute in Vienna and a coauthor of one of the new studies.

After the 2015 studies, both research groups wanted to understand what signals cause cells to start to move when they’re confined. They’d shown in the earlier papers that contractility of myosin-II proteins just inside the cell membrane in the area known as the cell cortex triggered the movement, but what was sensing the cellular deformation and then activating myosin II was an open question.

See “May the Force Be with You”

Lomakin became a guest scientist in the lab of Matthieu Piel at Institut Curie in Paris in 2015. He wanted to tackle this question of why cells contracted when confined, so he initiated a collaboration with Cédric Cattin, then a graduate student in the lab of Daniel Müller, a biophysicist at ETH Zürich. Cattin, Müller, and colleagues had described a technique in 2015 in which they used microscopic cantilevers to confine cells. Lomakin and Cattin worked together to apply the technique to precisely quantify cell responses to external pressure.

Meanwhile, Verena Ruprecht, a developmental biologist at the Centre for Genomic Regulation in Barcelona, and her colleagues were working on a similar goal. “The key question that we asked is, how does the cell actually feel that it is deformed?” says Ruprecht, a coauthor of the other new paper. “And how can it activate this program of cytoskeletal changes that then lead to the sudden migration that is like an escape reflex?”

Ruprecht, Stefan Wieser, a biophysicist at the Institute of Photonic Sciences in Barcelona, and their team focused on proteins from the outer surface of zebrafish cells confined beneath coverslips in culture to see if any of these proteins were responsible for the switch from not moving to moving. They didn’t find a role for adhesion proteins or ion channels that sense mechanical deformation. So they turned their attention to the nucleus.

“The nucleus is a very large and prominent organelle . . . and when you squish the cells, it is very clear that the intracellular organelles were affected, so we were then thinking, ‘Maybe the sensor is not at the surface, but it’s in fact inside the cell,’” says Ruprecht. They noticed that myosin II only seemed to be enriched when cells were compressed enough that the nucleus would be affected.

Using their microscopic cantilevers, Lomakin and colleagues made a similar observation and proposed that the nucleus is working as a sensor that, when deformed, signals to cells to seek more elbow room. To connect nuclear deformation with cell motility, the researchers performed a small-molecule screen in human cancer cells and determined that intracellular calcium, stretch-sensitive proteins in the nuclear envelope, and an enzyme called cytosolic phospholipase A2 (cPLA2) were involved.

Ruprecht’s group also converged on cPLA2. In a 2016 study, Philipp Niethammer’s group at Memorial Sloan Kettering Cancer Center showed that nuclear swelling during inflammation or osmotic stress, along with calcium signaling, could activate cPLA2. After seeing that study, Ruprecht’s team tested the role of cPLA2 in the zebrafish cell culture system. 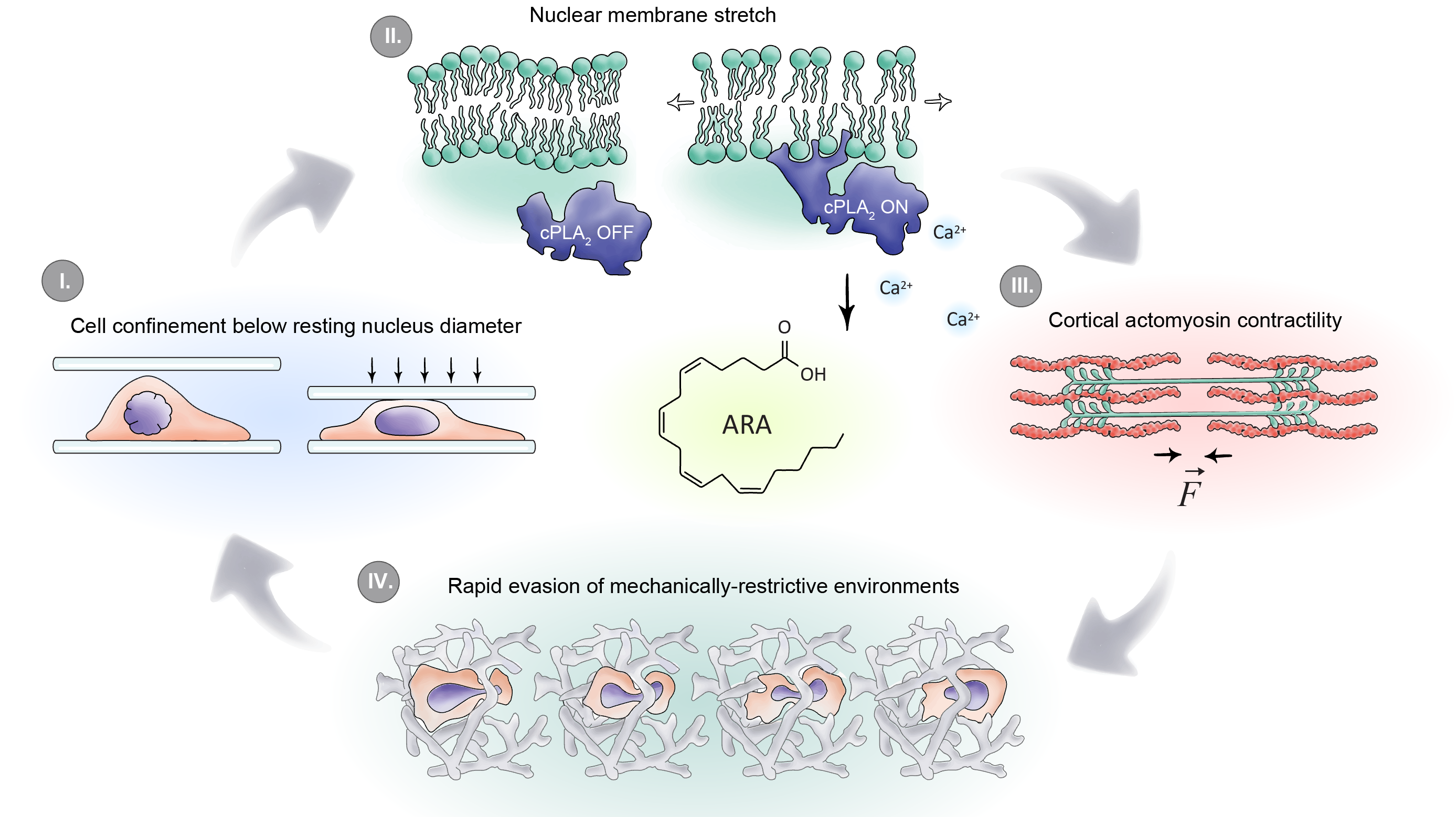 Both groups found that when the nucleus gets squeezed, its envelope stretches and unfolds, releasing calcium and recruiting cPLA2 from within the nucleoplasm to the inner nuclear membrane. This movement of the enzyme activates it, resulting in release of its principle cleavage product, arachidonic acid, which then sends a cascade of signals in the cytoplasm that eventually trigger myosin II activity, thereby linking nuclear compression and cell movement.

“Two independent groups using different approaches ended up with the same conclusions. It’s nice to see a lot of the commonalities that they point out using different experimental systems,” says Jan Lammerding, a biomedical engineer at Cornell University who did not participate in either study. “It really advances our understanding of how the nucleus helps to sense mechanical stress.”

The groups have found a key mechanism, Lammerding tells The Scientist, but in the future, “it would still be interesting to see if there are other mechanisms, and, if so, are they independent? How much interaction and crosstalk is there potentially between different nuclear mechanosensing mechanisms, but also between nuclear and cytoplasmic mechanisms?”

In addition to more questions about how it all works, the researchers are excited about possible applications. Cancer cells use “this mechanism to escape crowded environments, or mechanically constrictive environments,” says Lomakin, which means that it could be targeted for cancer treatment. “Preliminary data show that down regulating the activity of cPLA2 [with] small molecule inhibitors could interfere with the ability of tumor cells to break free from the primary tumor and to metastasize to distant organs.”