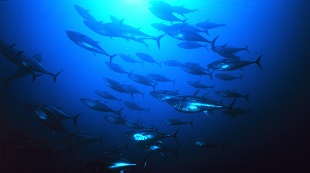 NOAA, DANILO CEDRONEPlucking older, more experienced fish from a migratory school may impair the group’s ability to migrate successfully to feeding grounds, according to a study published today (March 18) in the Journal of the Royal Society Interface.

A team of fisheries biologists and biophysicists developed a mathematical model to decipher how fish navigate, finding evidence to suggest that information about migration sites is stored in the memories of knowledgeable fish. This theoretical result serves to strengthen anecdotal evidence that how fish learn from one another is crucial for maintaining healthy migrating populations.

“When we try to understand natural populations, studying these systems with mathematical models is a very powerful tool to use,” said Colin Torney, a mathematician with the University of Exeter in the U.K., who studies animal ecology but was not involved in this work.

Most mathematical models of marine animal behavior rely on representations...

But the model population doesn’t always bounce back, the researchers found. “If you restore the fish populations, this might not be enough,” said De Luca. “They have essentially lost their group memory.”

The model helps explain the collapse of migratory fish populations, such as bluefin tuna in the Northern Atlantic, which collapsed in the 1960s following overfishing in the first half of the 20th century. “This suggests that care must be taken to protect migratory, charismatic fish species (such as tunas) at all stages from juvenile species up to the adult and most experienced individuals,” coauthor Patrizio Mariani, a fisheries biologist with the Technical University of Denmark’s Centre for Ocean Life, told The Scientist in an e-mail.

Mariani said that the study has implications for how researchers manage fish stocks, with an emphasis on protecting not just younger fish, but older individuals, as well as on maintaining food resources at informed fishes’ preferred migration sites. If migration sites are depleted of food stores, even older fish may have trouble sustaining migration routes to those destinations, the researchers noted.

This work was “certainly a very large effort and took some ambition to analytically derive,” said David Secor of the University of Maryland, who studies marine migration but was not involved with this study. “Past treatments of fish migrations tend to leave schooling alone, and they’re doing that at their own peril.” Secor expressed doubt, however, that memory was the reason informed fish knew where to go, noting that other factors—such as magnetic homing—might also explain the phenomenon.

The team now plans to apply its model to field data from studies of species like bluefin tuna.

“Real data should be incorporated into the model to determine if the model response in a manner similar to that observed in nature,” Daryl Parkyn, a marine biologist with the University of Florida, said in an email. “Tweaking a model through such iterations, a model can be made more realistic.”