Microbes were living on land as early as 3.22 billion years ago, fossilized rocks show, 500 million years earlier than previously documented.

The earliest signs of life on a young Earth, around 3.5 billion years ago, have generally come from the ocean in the form of fossilized microbes within ancient rock. Now, scientists working in the Barberton Greenstone Belt in South Africa—where some of the oldest rocks on Earth are preserved—find evidence of terrestrial microbial life that they estimate is about 3.22 billion years old. The results, published today (July 23) in Nature Geosciences, represent the oldest signs of land-based life on our planet yet discovered

“This work represents the oldest and least ambiguous work that we have so far that life existed on land already 3.2 billion years ago,” Kurt Konhauser, a professor of earth and atmospheric sciences at the University of Alberta in Canada who was also not involved in the work, writes in an email to The Scientist.

According to the study authors, the previously oldest visible fossilized remains of microbes on land were about 2.7 billion years old, found in a different location from the Barberton Greenstone Belt in South Africa and also in Australia. In a study published last year, researchers analyzed rocks from what they interpreted as hot springs in the Pilbara region of Western Australia. Although that paper, according to Konhauser, suggests that some 3.5-billion-year-old volcanoes may have been on land, the current study is definitive in showing there was extensive exposure of continental crust on the Earth’s surface 3.2 billion years ago.

Christoph Heubeck of the Freie Universität in Berlin, Germany, (left) and Martin Homann (right) in an abandoned gold mine near Sheba Mine sampling the lava at the Barberton Greenstone Belt
NADJA DRABON, STANFORD UNIVERSITY

For the current study, Homann and his colleagues focused on ancient sedimentary rocks, known as the Moodies Group, in the Barberton Greenstone Belt that were shown by geologists earlier to be approximately 3.22 billion years old. There, the team uncovered what are known as fossilized microbial mats—composed mainly of the imprints of bacteria and archaea and are among the earliest preserved forms of life. While living on the early Earth, these microbial community mats became interlayered and packed together with sedimentary rock made of rounded stones of different sizes that geologists call a conglomerate.

The team first analyzed and described the rocks’ positions in detail and compared these to current rock formations to understand how they moved, formed, and were preserved. The investigators concluded that the mat-forming microbes were indigenous to the host rock and part of what was once an ancient river delta.

“These are good data that show indeed that these fossilized, microbial mats [in Barberton Greenstone Belt] come from a terrestrial environment,” says Dominic Papineau, who studies the origin and evolution of life at the London Centre for Nanotechnology at University College London and who was not involved in the study.

The researchers then analyzed both the organic carbon and nitrogen isotopes within these fossilized terrestrial microbial mats and compared the profiles to isotopes extracted from nearby fossilized marine microbial mats. Both the carbon and nitrogen isotope values from the terrestrial and marine samples were unique from one another, suggesting that there were differences in the metabolism of microbes in the ocean compared to those on land.

“Already at 3.2 billion years ago, we see evidence of differences in mat-forming microbial communities suggesting that some were likely better adapted for life in the ocean versus on land,” says Homann. 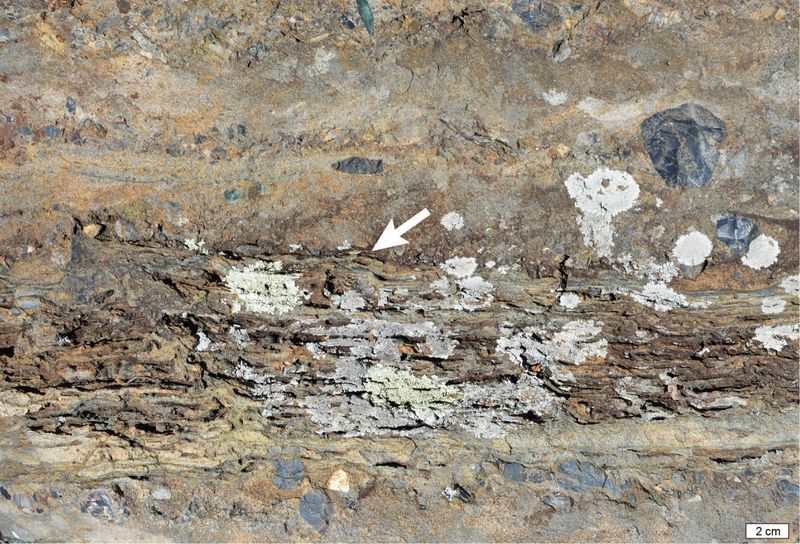 A major question for scientists is whether the early Earth might have already had localized pockets of free oxygen in an atmosphere generally lacking it. Most modern microbial mats are composed of cyanobacteria, which create oxygen as a byproduct of their metabolism (oxygenic photosynthesis), and are thought to have been responsible for the accumulation of oxygen in Earth’s atmosphere. “The data here cannot distinguish whether these microorganisms produced oxygen through their photosynthesis or did anoxygenic photosynthesis,” says Papineau.

The nitrogen isotope values, which reflect the ratio of the most abundant nitrogen-14 and the more rare and heavier nitrogen-15, of the land microbial mats were more positive compared to the marine samples. This suggested to Homann and his colleagues that the land 3.2 billion years ago contained atmospheric nitrate. Another way that these positive nitrogen values could have come about would be if there were atmospheric oxygen 3.22 billion years ago, which is less likely, according to the study authors, as it would imply that there already existed oxygen-producing cyanobacteria, for which there is currently not enough evidence.

For Konhauser, it would be interesting to dig deeper into the source of the nitrate in the samples and whether it might have indeed come from the atmosphere or via generation of oxygen from the ancient photosynthetic bacteria. “The structures and isotopic composition of the microbial mats certainly seem to suggest the presence of photosynthetic microbes already existing on land,” writes Konhauser. If the nitrate were indeed formed by the microbes in the mats, he adds, then perhaps oxygen-producing cyanobacteria were around at this early stage of the Earth’s history.

Correction (July 23): The estimate of life on land is 500 million years earlier than previously demonstrated, not 500,000 million years. The Scientist regrets the error.

Correction (July 25): The word in the second paragraph is “ambiguous,” not “unambiguous.” The Scientist regrets the error.