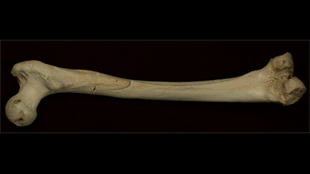 Femur from Sima de los HuesosMEYER ET AL, 2013. Sima de los Huesos, a cave in northern Spain, contains one of the largest collections of hominin fossils ever discovered. Now, this so-called “pit of bones” has also yielded the oldest hominin DNA ever sequenced.

Using a thigh bone from the cave, Matthias Meyer from the Max Planck Institute for Evolutionary Anthropology has sequenced the almost complete mitochondrial genome of one of Sima de los Huesos’ inhabitants, who likely lived around 400,000 years ago. That is at least four times older than the previous record-holder—a small 100,000-year-old stretch of Neanderthal DNA.

“It’s an incredible breakthrough. They managed to get DNA out of a sample that dates back to a time before either modern humans or Neanderthals existed,” said David Reich from Harvard Medical School, who was not involved in the study.

The team’s success greatly expands the range of places...

With time, DNA degrades and breaks down into ever-smaller fragments. Over the last year, Meyer’s group has been developing more efficient ways of recovering these short pieces. “If we look in the fossil, we can’t see any indication of any authentic ancient DNA longer than 45 base pairs,” said Meyer, “and DNA of that size has been pretty much disregarded until now.”

Earlier this year, the team proved their techniques work by sequencing the complete mitochondrial genome of a cave bear that was also found in Sima de los Huesos. “That was the test run,” said Meyer. When they finally moved onto the hominins, they needed almost two grams of bone to get enough DNA.

The biggest problem was contamination. There was so little DNA left in the bone that it was swamped by DNA from the scientists who dug up the fossils and ran the experiments, despite their precautionary measures. The team weeded out these modern sequences by searching for those in which cytosine residues had been transformed into uracil—a distinctive type of damage that accrues in ancient DNA. Eventually, the scientists extracted enough authentically ancient sequences to reconstruct 98 percent of the individual’s mitochondrial genome.

Sima de los Huesos has yielded the skeletons of at least 28 individuals from the middle Pleistocene period.  These hominins have been traditionally classified as Homo heidelbergensis, and their features suggest that they were very early ancestors of Neanderthals.

But rather than clustering with Neanderthals, their mitochondrial genome was most closely related to the Denisovans. This enigmatic group of people are a sister group to Neanderthals and are known only from a finger bone and molar. Both were found 4,000 miles to the east, in Siberia.  “It’s not what we expected,” said Meyer. “It’s hard to make sense of it.”

It is unlikely that the Sima de los Huesos hominins were actually Denisovans or even related to their immediate ancestors—for one, their teeth have a different shape. They might pre-date the split between Denisovans and Neanderthals.

Or they could be related to the ancestors who gave rise to both Neanderthals and Denisovans. Alternatively, another archaic group of hominins could have brought their mitochondrial DNA into both the Denisovans and the Sima de los Huesos people. According to John Hawks, a paleoanthropologist from the University of Wisconsin-Madison, this scenario would fit with the rumors that some geneticists have discovered traces of another mystery hominin in the Denisovan genome.

“Many have been assuming that Denisovans were a fundamentally Eastern population,” said Hawks via e-mail. “The Sima mitochondrial DNA similarity suggests an alternative scenario: that the Denisovans we know are in part descendants of an earlier stratum of the western Eurasian population. They could be a mixture of any number of earlier populations. ”

“Obviously, the origins of Neanderthals and Denisovans are quite complicated, perhaps more than what we would have hoped,” added Meyer. “[Our results] just put a big question mark over all of this.”

The only way to solve these mysteries will be to sequence more ancient DNA, including nuclear genomes from the Sima de los Huesos specimens. It was so hard to get mitochondrial DNA that a full nuclear genome may be next-to-impossible, but Meyer hopes to get some fragments within a few years.  “We haven’t quite figured out how to do it, but we won’t rest until we see part of the nuclear genome,” he says. “That should already be quite informative.”

The world’s oldest genome currently belongs to a horse that lived around 700,000 years ago. But this animal was buried in Siberian permafrost—ideal conditions for preserving DNA. Meyer’s success suggests that scientists can also extract DNA from fossils that come from a wider range of climates, including warm and humid ones. That is good news for scientists studying human evolution. “Humans have rarely been in permafrost environment. We’ve historically been a warm species,” said Reich. “A lot of the most interesting human material isn’t in cold places.”

But Meyer noted that Sima de los Huesos has very stable conditions, including little circulating air and constant temperatures of around 5°C to 10°C. “If permafrost is the perfect freezer, the cave is the perfect fridge,” he said. Still, Meyer doubts these conditions are unique, and his team are searching for similar places. These include caves that are very close to Sima de los Huesos, where possible fossils of Homo erectus and Homo antecessor have been found. “I hope we’ll find another magic site soon,” he said.