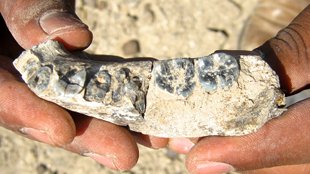 The fossilized mandible at the discovery site.KAYE REEDA fossilized mandible and teeth from an ancient hominin has been found in Ethiopia and may be one of the earliest specimens of the genus Homo. The fossil, described in a paper in Science today (March 4), is estimated to be between 2.8 million and 2.75 million years old and exhibits a combination of Homo characteristics and those of the more primitive hominin genus, Australopithecus.

“It is a remarkable new fossil discovery from a really poorly understood timeframe in human evolutionary history,” said biological anthropologist Darryl de Ruiter of Texas A&M University who was not involved in the research. Until now, de Ruiter added, “the earliest really reliable fossil evidence we had for the appearance of Homo was about 2 million years old.” Prior to that, the fossil evidence of human ancestors was “very sparse.” The mandible is, therefore, a...

The Homo genus is believed to have originated in East Africa from the more primitive and ape-like australopithecines, possibly Australopithecus afarensis, which, fossils indicate, lived around 3 million years ago. However, the fossil record for the earliest Homo, H. habilis, does not start until about 2 million years ago. Between those two time periods, “there is a big gap in the fossil record,” said anthropologist Brian Villmoare of the University of Nevada, Las Vegas, lead author of the new paper. Indeed, there wasn’t much more than “a handful of isolated teeth,” agreed de Ruiter.

With the hope of filling that gap, Villmoare and colleagues started scouring a site in the lower Awash Valley of Afar, Ethiopia, which geologist Ramón Arrowsmith of Arizona State University and his colleagues had confirmed contained sediments from 2.84 million to 2.58 million years ago, as described in an accompanying Science paper.

“One of the convenient things about East Africa,” said Villmoare, “is that it is a very volcanic area.” When a volcano erupts, he explained, it sends out ash containing crystals that start to decay and can be dated radiometrically. “When the ash lands it starts a timer ticking . . . so if you are between two ash layers, you know that you are sandwiched between those two dates.”

But even with the knowledge that the researchers were looking in the right place, it was a long search. “I’ve personally been going out there since 2002, first as a grad student and now as a professor,” said Villmoare. After unearthing countless animal bones, the hominin mandible itself was discovered in January 2013 by study coauthor Chalachew Seyoum, who was then a PhD student. “We knew right away that was a human,” said Villmoare.

The specimen, which is from an adult and “likely female,” said co-author William “Bill” Kimbel of Arizona State, exhibits a similar overall size to the jaws and teeth of A. afarensis, but has  “somewhat slim” molars and a “more modern and less ape-like” canine area. He added: “It was immediately apparent that this jaw did not come from a species that resembled Lucy”—the famous A. afarensis specimen. Indeed, such altered dentition fits with the transition to increased meat-eating seen in Homo, said anatomist Scott Simpson of Case Western Reserve University in Cleveland Ohio, who was not involved in the work.

The animal bones isolated from the site also proved to be valuable. Based on the types of animals present, Arrowsmith and his colleagues suggested in their accompanying paper that the region was open and arid, “which is also distinguishable from the early australopithecines,” who tended to live under tree cover, said Simpson. The finding fits with a hypothesis that climate change may have been a driving force in the evolution of Homo.

In general, the Ethiopian site is yielding information about a time period that “really was a black hole” said Simpson. “I’m glad these guys persevered,” he added. Thanks to them, “instead of raw speculation about what earliest Homo looked like, we now have something we can point to and discuss.”