Scientists have isolated the DNA of the roundworm Toxascaris leonina from puma feces dating back 16,570 to 17,000 years ago, at the end of the last ice age, in a study published in Parasitology on August 27. The authors report this is the oldest “molecular parasite record worldwide” and this evidence suggests that the parasite was present in South America before humans arrived. The study also sets the record for the oldest recovered ancient DNA from fossilized feces, or coprolites.

In a rock shelter 3,582 m above sea level in Argentina, the researchers found the puma coprolite in a sedimentary layer. The age and preservation of the feces were remarkable, says Piers Mitchell of the University of Cambridge who was not involved with the study to The Guardian. The team radiocarbon dated the feces and separated out the parasite eggs. Mitochondrial DNA analysis of the coprolite and the parasite eggs confirmed the coprolite was from a puma and the parasites were T. leonina.

While parasitologists have been able to find evidence of parasites in coprolites before, those coprolites were more recent, only a few thousand years old. “The latest find shows that these roundworms were infecting the fauna of South America before the arrival of the first humans in the area around 11,000 years ago,” says coauthor Romina Petrigh in a press release.

Prior to this study, experts thought that the presence of T. leonina in American wild carnivores was due to their contact with domesticated mammals. Petrigh says in the press release, “This has significant implications for the natural history of the region, as well as for inferring the ecological context immediately before—as far as is knownt—the first human explorers ventured into the area.” 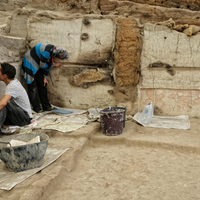