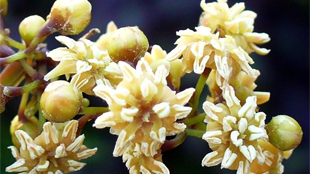 Amborella trichopodaWIKIPEDIA, SCOTT ZONAThere is nothing outwardly special about Amborella trichopoda—a small, shrubby, understory tree with unremarkable creamy flowers from the Pacific islands of New Caledonia. But its DNA reveals its true significance: A. trichopoda is the sister species of all other flowering plants, or angiosperms. It is the last survivor of a lineage that branched off during the dynasty’s earliest days, before the rest of the 350,000 or so angiosperm species diversified.

A large consortium of scientists has now sequenced Amborella’s genome to understand what the ancestral angiosperms were like, and how they came to fill the world with flowers. The results are published today (December 19) in a series of papers in Science.

“The traits that Amborella shares with the other angiosperms can be interpreted as primitive traits that were present in their shared ancestor,” said Claude dePamphilis from Pennsylvania State University, one of...

Dietmar Quandt from the University of Bonn, who was not involved in the study, described Amborella as a more worthy model organism than Arabidopsis—the first plant scientists sequenced. “Its position as the first branching flowering plant makes it very special,” said Quandt in an e-mail. “The Amborella genome is a cornerstone for future research.”

The angiosperms have repeatedly duplicated their entire genomes throughout their history, a predilection that may have catalyzed their evolution and spurred their success. Many of these doublings are recent and unique to certain lineages, but Amborella’s genome shows that at least one of these events, known as epsilon, preceded the angiosperms themselves.

Epsilon had been inferred from earlier studies, but the Amborella genome confirms that it took place. It may help to explain how angiosperms rapidly diversified into a planet-spanning group after suddenly appearing on the scene 160 million years ago—a rapid ascension that Darwin billed as an “abominable mystery.”

By comparing Amborella’s genome to those of other plants, the team also reconstructed some of the portfolio of genes in the ancestral angiosperm. Of 5,210 gene families, 4,031 were found in the common ancestor of all seed-bearing plants, both flowering and non-flowering. This suggested that the angiosperms co-opted many pre-existing genes to the business of making flowers.

The remaining 1,179 gene families—around a quarter of the total—were new. Some of these help to make flowers, but others are involved in stabilizing the plants’ physiology or responding to environmental cues, including plant-eating animals. “That was a surprise. The production of the flower wasn’t just a result of shifting gene expression, as is often assumed in the evolution of new development,” said dePamphilis. “There was a large amount of real novelty, too.”

Amborella’s mitochondrial genome yielded an even bigger surprise. It contains DNA from the mitochondria of a wide range of other plants, including entire genomes taken from three green algae and one moss.

These acquisitions add up to around six genomes’ worth of DNA. They have bulked up Amborella’s mitochondrial genome to a whopping 3.9 megabases, packaged into five circular chromosomes. Although at least two other plants have large mitochondrial genomes spanning several chromosomes, none have anything approaching the scale of Amborella’s acquisitions.

“We had seen some inklings of foreign genes, but we had no idea of their magnitude until we sequenced the genome,” said Jeffrey Palmer from Indiana University, who led this part of the project. “We never thought that it would have acquired whole genomes.”

Palmer said he suspects that Amborella has acquired genes through direct contact with other plants that live on it (epiphytes) or inside it (parasites). Falling vegetation or hungry herbivores could wound the tree and its entourage, breaking their cells, and creating opportunities for their mitochondria to mingle. When this happens, there is a chance that the mitochondria will fuse, in a manner akin to sex.

Although a few of these foreign genes may still be functional, the vast majority of them are junk. “For some reason, Amborella isn’t losing them as frequently as other plants, or maybe it’s picking them up more often,” said Palmer.

Amborella is not a rare plant, but it is isolated. It is found in just 18 populations in New Caledonia, and the team sequenced individuals from 12 of them. The researchers found that, despite living on a tiny island, Amborella has as much genetic diversity as Populus—the genus that includes all aspens, poplars, and cottonwoods.

This diversity is even more impressive since Amborella seems to have passed through several bottlenecks during the past million years. The most recent one took place around 100,000 years ago, and may have winnowed the population down to fewer than 5,000 individuals.

“It almost went extinct,” said James Doyle from the University of California, Davis, in an e-mail. “We botanists are lucky it managed to dodge the bullet since this plant, although specialized in many ways, has a lot to say about the features of the first angiosperms.”