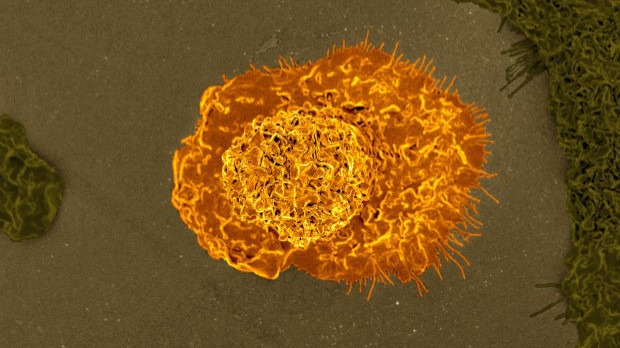 MacrophageWIKIMEDIA, NIAIDMacrophages detect and kill pathogens, but also recognize and repair damage to host tissues. How the cells determine which response is required, however, is somewhat of a mystery. Now, researchers at the University of Oxford studying the macrophage toll-like receptor 4 (TLR4), which interacts with both bacterial lipopolysaccharide (LPS) and host protein tenascin-C, show that the two molecules trigger different pathways and proteins in the macrophages that govern contrasting responses. The findings were published yesterday (August 30) in Science Signaling.

“This is a very interesting paper. It addresses a big overall question of how does the immune system distinguish between infection and non-infectious tissue damage,” said immunologist Cynthia Leifer of Cornell University College of Veterinary Medicine in Ithaca, New York, who was not involved in the study. “The overall conclusion is that, through one innate immune receptor, with two different ligands, you can trigger two different...

LPS, also known as endotoxin, is a molecule found in the outer membrane of many different types of bacteria. Through its interaction with TLR4, LPS induces a strong inflammatory reaction in humans. Tenascin-C, on the other hand, is a protein found in the extracellular matrices of various host tissues. “There is not very much of it present in a healthy person, but when you get injured its levels go through the roof and that triggers an immune response,” said Kim Midwood of Oxford who led the new study. About seven years ago, Midwood’s group made the surprising discovery that tenascin-C also signals via TLR4.

“So this receptor is sensing infection, but its also sensing damage . . . which is a wholly different type of defense,” Midwood said. “It’s actually taken years for people to believe it, because nobody would have ever thought it would.”

To find out, she and her colleagues treated human macrophages in culture with either LPS or an active fragment of tenascin-C and examined the effects. The researchers found that while both ligands triggered the production of cytokines, the subsets and levels of these cytokines differed. Those induced by LPS were representative of a classic pathogen-killing macrophage state, the team found, while those induced by tenascin-C suggested the cells were in tissue-repair mode.

The team also found that LPS and tenascin-C triggered phosphorylation of different subsets of cellular proteins. Among the phosphoproteins strongly induced by tenascin-C were members of the collagen family. However, in contrast, LPS induced the expression of collagenases—enzymes that breakdown collagen.

“In one setting [the macrophages] are ready to chew up tissue,” said immunologist Carl Nathan of Weill Cornell Medical College in New York City who was not involved in the study, and in the other they “secrete building blocks for repair.” Thus, the outcome of the LPS versus tenascin-C signaling “is strikingly different,” he said.

It is not yet clear how these two ligands induce such disparate effects in the same cell by the same receptor. “That’s the million-dollar question,” said Leifer. It might be that the ligands recruit different co-receptors, or induce TLR4 to adopt different conformations, she suggested.

Figuring out the mechanism will be important, however, because understanding how macrophages read and respond to these differing signals might offer insights into how to suppress tissue damage but maintain host defense in patients with, for example, chronic inflammatory diseases, said Midwood.