Science today has rapidly moved into unpredictable and unprecedented achievements, with increasingly faster advances in many different fields. In the last two decades, the advent of high-throughput technologies, with special emphasis on omics, has produced a massive amount of data that have soon required the establishment of novel approaches, mathematic algorithms, or even new disciplines, notably bioinformatics. Historically, both empirical and deductive (hypothesis-driven, mechanistic) approaches have contributed to the advancement of all scientific disciplines. Nowadays, however, the former approach seems to prevail, due to these powerful, sophisticated technologies that are available.

This frantically growing body of knowledge, based on more and more specific data, has eventually led to the proliferation of what I call the scientists of what, who are merely interested in obtaining highly selective information on a series of biological phenomena. The scientific context, wherein these researchers operate, is almost entirely addressed to personalized...

Doubtlessly, this approach has produced some extraordinarily successful results in both survival and quality of life of patients, but it has also contributed quite limitedly (if not at all) to our current understanding of complex mechanisms underlying the development and/or progression of major chronic diseases, including cardiovascular and neurodegenerative diseases, cancer, diabetes, obesity, and so forth. In my own field of cancer research, this data-dense approach has often generated either preconceived paradigms or disputed interpretations of causes of this life-threatening disease. The reason for the “incompleteness” of the precision-medicine approach to date is because, while it could identify the genetic basis that might contribute to any disease pathogenesis, understanding the roles of the broad environmental triggers of epigenetic mechanisms is far more difficult. 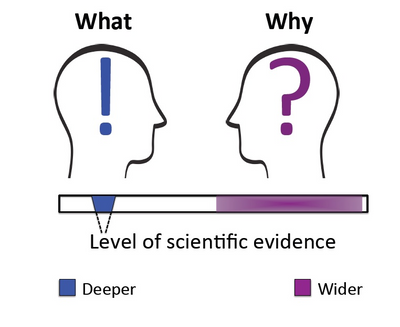 In contrast, a second category of scientists, the scientists of why, whose number I’ve experienced is declining towards extinction, is primarily dedicated to unveiling the intricate interplay of genetic and epigenetic machineries whose alterations may be implicated in the occurrence of the above noncommunicable diseases (NCDs). These researchers do not dive much among highly specific data and their analyses: rather, they step back from their own translational research to get a larger, comprehensive vision of the whole picture. They recall older studies, collect and combine various evidence pertaining to distinct medical fields, or even integrate and interpret milestone findings accomplished in apparently unrelated disciplines, aiming to get significant insights into biological processes that ultimately lead to disease occurrence. As pointed examples see J.E. Trosko, 2016 and L. Cocciadiferro et al., 2017, respectively, for metabolic disease and hepatocellular carcinoma.

As the prevalence of NCDs continues to rise worldwide (either because of increasing incidence, declining mortality, or both), primary prevention of chronic diseases has now become a compelling issue, being not only relevant to healthcare systems, but having also significant implications and potential in several other areas, including education, agriculture, environment, welfare, and so forth. This would require that hypothesis-driven studies provide enough scientific evidence to clarify a significant proportion of the multistep, multifactorial processes responsible for the development and progression of NCDs as a basis to design and implement strategic prevention measures directed to large target populations. In this respect it becomes essential that public health policies and research funding agencies can support such important studies. The resulting evidence may then be included in a multisectorial, multidimensional analytical approach, whereby scientists of why represent leaders who provide scientific communities not only with suited models and action plans for preventive medicine, but also with knowledge-based platforms for building early diagnostic tools and/or individually tailored treatment options.