Women have long encountered many barriers in the fields of science, technology, engineering, and mathematics (STEM). Here we investigate one of these barriers that lives on the subtler end of the spectrum: women’s inhibition to communicate in public academic forums.

We became aware of this phenomenon from our own experiences and observations. We are three established women researchers who have been attending international conferences for almost a decade. But we rarely ask questions after presentations. Indeed, one of us has never asked a single question at a major conference in her entire career. Are we an exception, or is this inhibition common among female researchers?

To quantify female researchers’ inhibition in oral communication, we assessed how frequently male and female attendees asked questions during presentations at conferences and seminars at three major research institutions (King Abdullah University of Science and Technology in Saudi Arabia, the University of Exeter in the UK, and the University of New England in the US). We collected information on the gender of the questioners and the number of women and men in the audience during 73 seminars in the fields of biology and chemistry between 2016 and 2018.

We found that, on average, men asked three times more questions (absolutely and proportionally) than their female counterparts. Our findings agree with those of a recently published study showing a comparable gender disparity in participation in academic seminars: the study reports that men were 2.57 times more likely to ask questions after seminars. Therefore, the three of us are not the exception; we are the norm.

What makes women scientists inhibited and to what extent this silence is prevalent in STEM are unknown and thus should be investigated. We hypothesize that women might begin to shy away from participation at early stages of their education. A unique study in Norwegian classrooms showed that girls’ conversational participation decreases with increasing grade as compared to boys’. That is, at age 6 (Grade 1), both genders participated similarly (47 percent girls vs 53 percent boys), but by age 14 (Grade 9), participation becomes uneven (30 percent girls vs 70 percent boys. (See figure.) Our observations in the academic domain suggest that this imbalance persists up to the highest level of education. 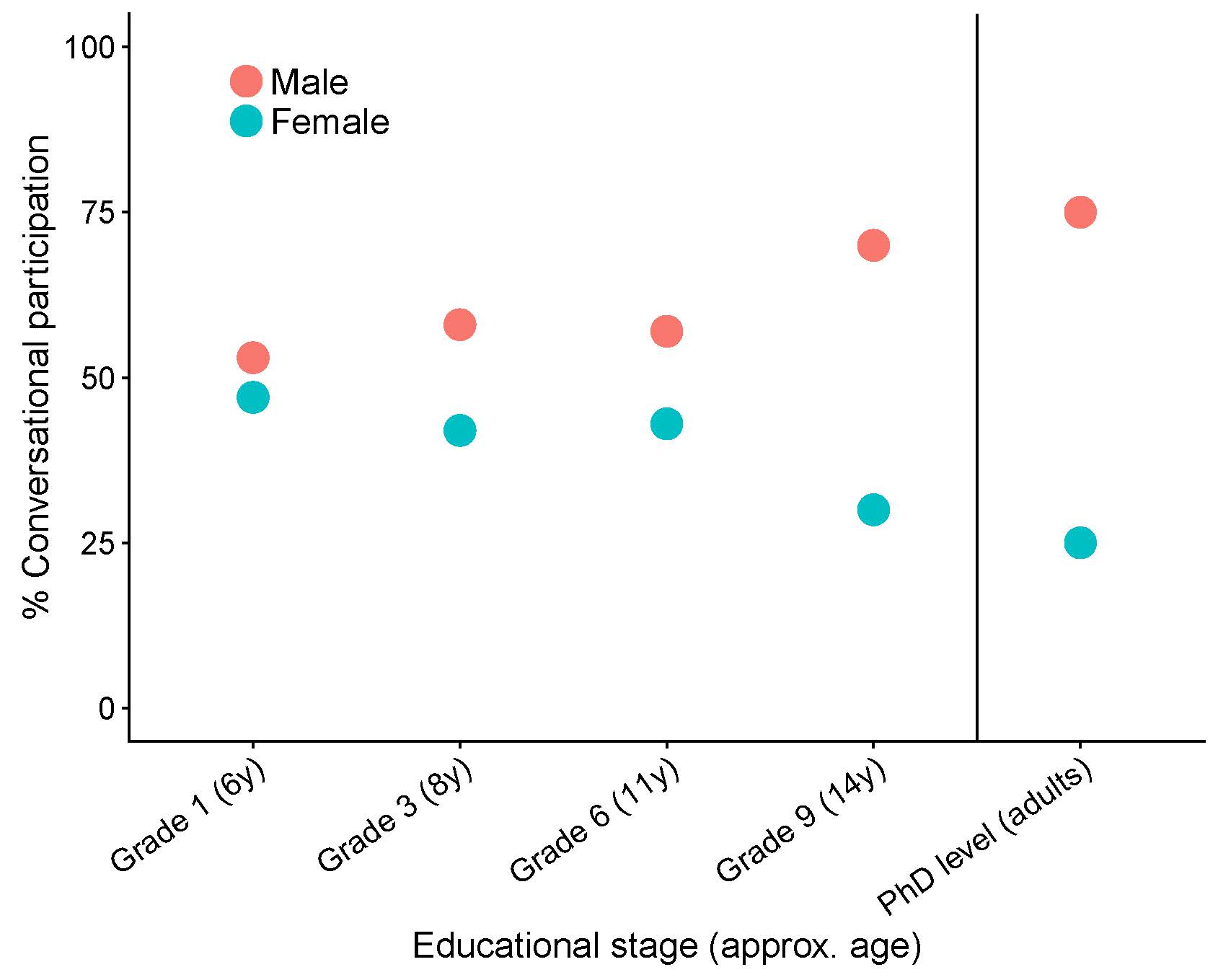 Conversational participation (mean percentage) by gender at different stages of the educational system, with the approximate age indicated in parenthesis. On the left are the results reported in V.G. Aukrust, 2008, and on the right are the observations from our unpublished study.
A. ANTON, F.C. GARCIA, AND M.LL. CALLEJA

Women’s self-esteem and subsequent willingness to participate in conversation in educational contexts could be affected from early stages of education by, for instance, teachers giving more attention to boys than girls. Later on in academic development, this female silence could be maintained by other structural and social elements, for instance, women getting worse teaching evaluations as faculty, receiving lower ratings in academic articles, and garnering less-effective recommendation letters than their male colleagues.

The observed women’s behavior described here, whether conscious or unconscious, could be the tip of the iceberg of a much larger behavioral constraint for women in science. For instance, academic job interviews often require oral presentations followed by questions and answer sessions, in which effective communication skills are crucial for the applicant to succeed. Similarly, scientists’ active participation in academic communicative settings such as group meetings, conferences, workshops, or committees is vital for their recognition and success.

We think that to reduce women’s inhibition in academic communication, universities could provide courses of professional development to train in oral communication skills at the undergraduate and graduate levels, and possibly at the early stages of education. To address the specific inhibition during seminars and conferences, assigning the first question to a woman would be a good start as the gender disparity of those who ask questions will be subsequently reduced. Finally, we think women in science must be aware of this phenomenon and work actively to get their voice back. We advocate a conscious effort from women to work up the nerve to participate in all academic settings and thereby help remove lingering gender bias in STEM.

Andrea Anton is a postdoc at the Red Sea Research Center of King Abdullah University of Science and Technology (KAUST) in Thuwal, Saudi Arabia. Francisca C. Garcia is an associate research fellow at the University of Exeter. Maria Ll. Calleja is a senior scientist at the Max Planck Institute for Chemistry in Mainz, Germany.