A recent Nature paper describing an artificial blood perfusion used in an attempt to restore brain function after pigs were decapitated has generated great discussions in the medical, scientific, and bioethical academic arenas. Although the study’s results showed marked improvement and restoration in many cellular and molecular functions within the brain, the artificial blood perfusion system, called BrainEx, failed to restore global brain activity associated with awareness, perception, or other higher-order brain functions whose absence are intrinsic to defining death.

Before such a system were to be applied to, say, revive brain activity in stroke patients, there are three scientific questions that remain to be addressed from the researchers’ study. First is whether their failure to restore global brain activity was due to the fact that the researchers waited up to four hours after decapitation before hooking up their system to the decapitated pigs. In many cases of stroke, patient recovery is dependent on the fastest method to initiate treatment. Would BrainEx’s system be more efficient if the treatment began after one hour?

Second, they only claimed to “treat” the pigs for about 10 hours. As we know, neuronal recovery is slow, and longer treatment times may be more beneficial in applying this system to human stroke victims.

The third question relates to the age of the pigs used in their studies. The medical definition of death has been guided by the Harvard criteria established in 1968. Briefly, these criteria included unreceptivity, unresponsiveness, no movements or breathing, no reflexes, and a flat electroencephalogram (repeated after 24 hours with no change).  To date, there has never been a case in which the Harvard criteria of brain death were correctly diagnosed and the adult patient subsequently recovered with any high level neurological function. In other words, the criteria accurately discern alive from dead—at least among adults.

There are cases of infants who had fit the Harvard criteria of death, and yet had awoken from their coma. In Israel, physicians rarely declare an infant under two months of age as brain dead because some of these infants recover from their comas.

These cases suggest that scientists should examine the use of BrainEx on newborn piglets rather than adult pigs as they did in their study. If successful, the first clinical applications should be in comatose infants—and not adults—to potentially reverse their comas.

There is another benefit to testing this technology in infants: the ethical challenge of getting permission could be minimized. Parents have the autonomous right to approve the clinical testing of this technology on their children. This avoids the issue of how to devise a clear and logical method to obtain patient consent (before they go into a coma) to allow for clinical testing of BrainEX in adult patients.

If clinical testing on infants proves to be efficacious, then it would be logical to expand the clinical testing and examine whether BrainEx improves brain function in adult ischemic stroke victims. From a consent perspective, one could suggest an opt-in type of consent policy as is done with organ donation so that individuals would grant automatic approval for this technology, provided that they did not refuse to participate when they completed their healthcare directives.

If this technology could be developed to enhance brain function in patients who fit the criteria for being brain dead, the medical field will face a new ethical challenge: whether the Harvard criteria’s definition of death is more than just “irreversible intraneural functions.” History has taught us that as technologies develop, the definition of death may need to be revised or modified. The traditional criteria of “pulselessness” and apnea (spontaneous respiration) are no longer recognized as defining death because mechanical ventilation and organ transplantation developed in the 1950s changed everything, enabling these patients exhibiting these signs to survive.

The clinical definition of death still remains controversial. Daniel Shewmon of the University of California, Los Angeles, has reported cases showing that the bodies of patients diagnosed as brain dead do not necessarily “disintegrate,” as long as they are provided with mechanical ventilation and tube feedings. Such patients may “retain integrated functioning, including growth and development, wound healing, infection fighting, and gestation of a pregnancy, such that some of these patients may continue to have biological survival for many years.” As new technologies develop, it will be important to define death with an open mind because millions of families rely on physicians to make “dead certain” that their patients have been irreversibly deceased.

John D. Loike, a professor at Touro College, writes a regular column for The Scientist on bioethics. Alan Kadish serves as president of Touro College and University System. 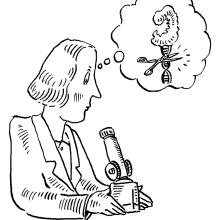