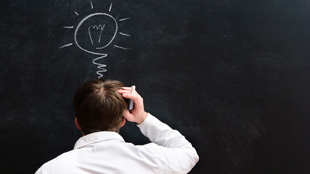 Creativity enhances life. It enables the great thinkers, artists, and leaders of our world to continually push forward new concepts, new forms of expression and new ways to improve every facet of our existence. The creative impulse is of particular importance to scientific research. Without it, the same obstacles, ailments, and solutions would occur repeatedly because no one stepped back and reflected to gain a new perspective.

Unfortunately, in the academic world—where much of today’s scientific innovation takes place—researchers are encouraged to maintain the status quo and not “rock the boat.” This mentality is pervasive, affecting all aspects of scientific research from idea generation to funding to the training of the next generation of scientists.

Many who succeed in advancing to leadership positions in academia have been cautious, making few enemies and stirring little controversy. But such a strategy fails to generate the insights that drive scientific fields of research forward. The history of science is filled with mavericks who refused to accept the prevailing theories and challenged the status quo. In the field of infectious diseases, those scientific mavericks included Louis Pasteur, whose germ theory was ridiculed; Joseph Lister, who promoted the concept of sterilization; and Ignaz Semmelweis, who determined the cause of puerperal fever and emphasized the importance of hand washing as a preventative measure. In recent years, Barry Marshall and Robin Warren challenged the dogma that peptic ulcer disease was the result of stress when they proposed and proved that this disease was actually caused primarily by the bacterium Helicobacter pylori.

In today’s environment, out-of-the-box thinking is ever more important, as change is now the rule. The internet combined with the availability of powerful personal computers and smart phones has greatly enhanced the worldwide sharing of ideas, and as a consequence, the rate of change is progressively accelerating. All institutions including our academic centers need to adapt and reevaluate policies concerning how progress and success are defined.

Effective responses to environmental challenges require adaptive leaders. These leaders can convince others to change their viewpoints, challenging prevailing scientific dogma as well as more logistical issues such as the methodologies used in the lab. This type of influence is critical to easing the sense of loss and anxiety that comes with change. Common responses to these emotions include procrastination, denial, and discontentment, which can perpetuate an environment that resists change—and progress. Ironically, the tenure system designed to allow academic professors to speak freely without risk of losing their position also allows them to resist change and discredit leaders who encourage it.

In the realm of research, funding governs projects and possibilities. The maladaptive insistence that research scientists obtain their financial support by continually writing federal, state, and private grants often prevents scientists from stepping outside the boundaries established by this grant process. Because the success rate is now down to 10 percent, academic scientists are forced to spend much of their time writing proposals, rather than performing creative research. Universities need innovative leaders who are willing to change the way research enterprises are supported, or they will continue to stifle their creative and energetic faculty.

In this respect, universities can take a clue from the business world, which has realized that investment in human resources and employee development—not brick-and-mortar structures—creates successful, competitive enterprises. Just as successful businesses work toward profits, successful universities need to work toward their primary mission of creating new knowledge. Too often, university administrators spend the majority of their time on fundraising and budgets rather than creating a fertile environment for true innovation.

Effects on teaching and students

The results of this suppression of creativity are not limited to the world of grant-funded research. The same leadership that fosters the status quo in research also affects the classroom. A university education is supposed to teach students how to think critically. However, that goal has been set aside in many of our classrooms, being traded for the less ambitious goal of memorizing facts. Curiously, when the rote memorization is emphasized, creative students are often penalized. Multiple-choice exams are the standard for testing a student’s ability to memorize facts, and creative students are usually not adept at guessing what a test writer is thinking. They are much better at solving problems, generating hypotheses, designing protocols, and developing a deep understanding of their discipline—all key aspects of good critical thinkers and professionals in science. By rewarding those students who accept the current facts as gospel, rather than skills that are likely to lead to the creation of knew knowledge, universities are stifling the next generation of scientists.

The removal of creativity as a priority can also affect life in the lab, turning a promising dialogue of new ideas and challenges into a monologue. Lead investigators too often quell discussions, rather than encourage junior investigators to share their ideas. They prevent innovation in their laboratories by imposing an autocratic and hierarchal structure. Science has become ever more specific and specialized, making it impossible for one individual to grasp the full complexity of the field. In the current era, effective and truly innovative science requires teamwork and very active discussion to overcome these barriers to creativity.

Keys of creativity and communication

Thankfully, some scientific institutes recognize the need for collaboration and, following the lead of the business world, are utilizing teams of experts in different specialties to work together to generate the hypotheses and design the appropriate experiments to advance knowledge, promote growth, and foster creativity in their fields. The university system would benefit from embracing this same approach. University governing bodies need to assemble leadership teams comprised of people who actually work in their laboratories and understand the challenges of today’s research environment. Ambitious and creative minds have revolutionized our world, and our perceptions of our universe, in a very short period of time. If our universities fail in their primary mission to create new knowledge, our progress toward creating a better world for everyone will be seriously compromised.

Fred Southwick is a Professor of Medicine at the University of Florida. He is the Project Manager of New Quality and Safety Initiatives for UF & Shands Health System and is the author of the upcoming book Critically Ill: A 5 Point Plan to Cure Healthcare Delivery.