Carmine D’Amico is a doctoral student in the lab of Hélder Santos at the Faculty of Pharmacy of the University of Helsinki in Finland exploring microneedles technology for drug delivery...

Hélder Santos is a research director at the Faculty of Pharmacy of the University of Helsinki in Finland, head of the Department of Biomedical Engineering at the University Medical Center...

ABOVE: COURTESY OF CARMINE D’AMICO

Over the past 18 months, the world has been amazed at how fast scientists can develop vaccine candidates against COVID-19. The majority of these vaccinations are administered via hypodermic injection, which allows the vaccine’s ingredients to be swiftly assimilated into the bloodstream. However, some require multiple doses, and most must be kept at controlled, often super-cold temperatures until they can be administered by trained personnel, creating major logistical challenges.

Several researchers, including ourselves, are working on a technology that aims to provide the advantages of injectable vaccines without the drawbacks—and without the traditional needle stick: microneedles. While the technology still has a long road to the clinic, having entered human trials less than 10 years ago, we believe this it is the future of vaccine delivery, and the ongoing pandemic has highlighted the need to accelerate its development.

Basically, an array of tiny needles measuring just hundreds of microns is attached to a backing, permitting bandage-like application. Drugs can be encapsulated within water-soluble microneedles that dissolve when the patch is placed on the skin, allowing the drug to be released. Importantly, the microneedles pierce the outermost layer of tissue to allow greater absorption of the drugs compared to creams or other kinds of medical patches such as nicotine patches, but they do not penetrate deep enough to stimulate pain receptors. The patch can be self-administered and is as easy and painless as taking a pill.

The patch has its limitations. Being such a small medical device, for example, the maximum drug dose is less than 1 mg. But for treatments that do not require a high dosage, including vaccines (both antigen-based ones and nanoparticle ones, such as those used for mRNA vaccines against COVID-19), hormones, and drugs with elevated potency, microneedles are ideal. In addition to being user friendly, microneedles could elicit a more robust immunological response.

Conventional vaccine injection bypasses the skin’s immune system and introduces the antigen into the muscle or subcutaneous tissue, thereby inducing a systemic immune response. Yet, the skin, our biggest organ, also has a superb immunogenicity capacity due to the presence of many antigen-presenting cells. By delivering antigens there, microneedles could capitalize on this local response to boost the protection provided by vaccines. Indeed, animal studies suggest that microneedles elicit higher antibody production and better cellular response. 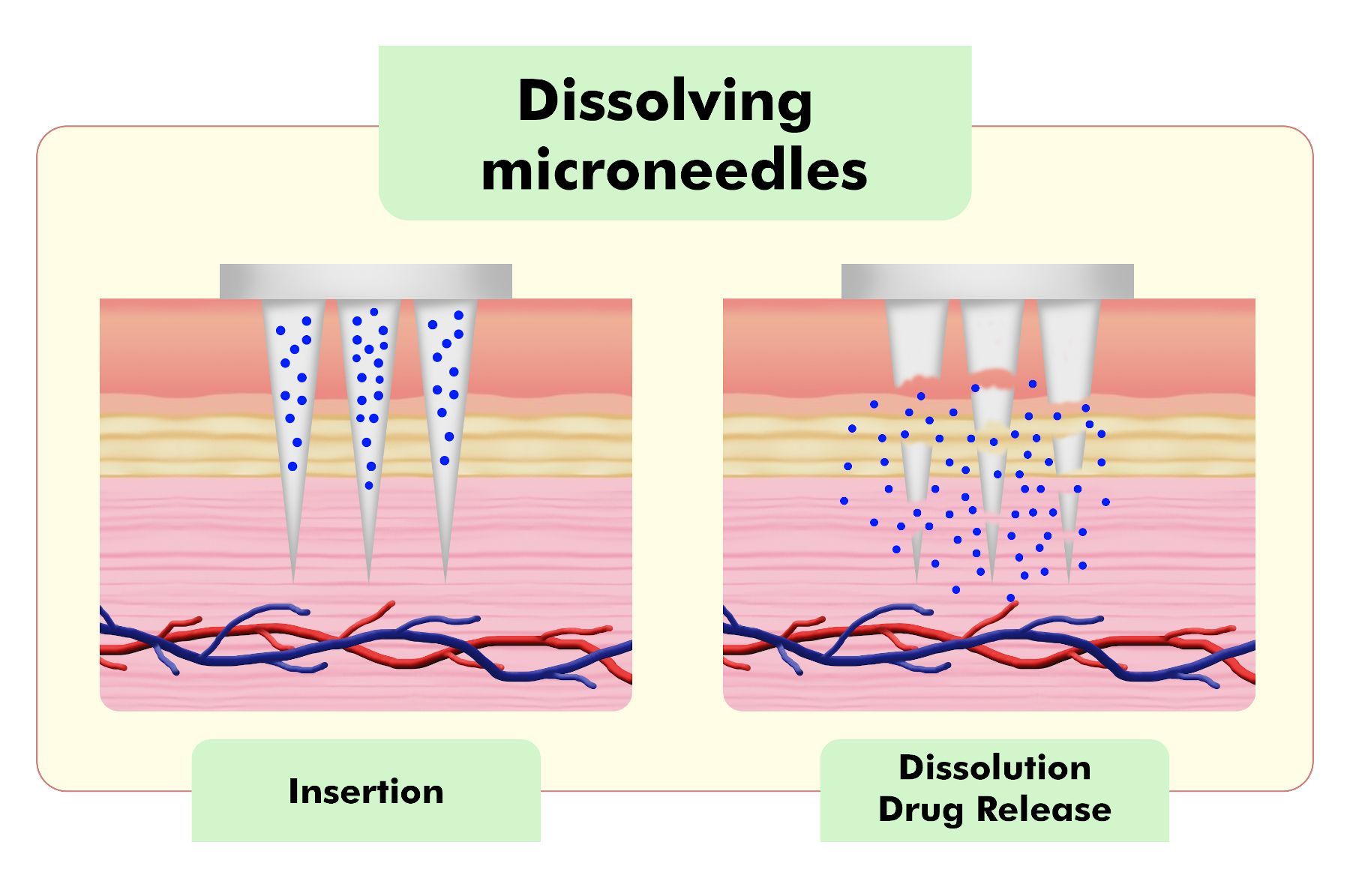 Water-soluble microneedles dissolve in the skin to release an encapsulated drug.
Courtesy of Carmine D’Amico

Moreover, because microneedles are a dry formulation, they allow drugs to maintain their activity even without storing them at the low temperatures required of many injectable vaccines. For example, one study has shown that a vaccine for influenza can be stable for six months at 25 °C and at least a few weeks at 40 °C if incorporated into microneedles. This is critical for ensuring vaccinations reach far-flung corners of the world that do not have the resources to maintain the cold chain.

Another issue is vaccine wastage. For example, in some cases only a portion of the dose is used before a vaccine expires. It can also happen that healthcare personnel decide not to vaccinate a patient when there are not enough patients to use the whole vial. According to estimates, the wastage rates for 10-dose vials may be as high as 25 percent for liquid vaccines and 40 percent for freeze-dried vaccines. With microneedle patches, there is no wasted drug. And there are no needles that require special disposal procedures.

There are plenty of hurdles yet to be overcome. We need further clinical studies in human volunteers to demonstrate safety and efficacy of this vaccine approach, and the scale-up of production is still in its infancy. On a lab scale, usually we fill molds with the polymer solutions via vacuum or centrifugation. Once dried, the final formulation is demolded and secured to a backing. This is tedious and not practical for mass production.

Additionally, the majority of vaccinations are sterilized by filtering, which is not feasible for solid microneedle patches. While the solution may be sterilized before being placed in the molds, the final product will also need to undergo sterilization by some alternative technique not yet developed.

The recent pandemic and the possibility of others is a wake-up call to focus on these challenges. In the last year and a half, several institutions and biotech companies announced preclinical studies for a SARS-CoV-2 vaccine utilizing microneedle patches. Big pharmaceutical companies will certainly step up and invest more over the coming years in microneedle-based products. Injections have been used for centuries, but the necessity for a worldwide immunization effort is a persuasive reason to try to move forward.