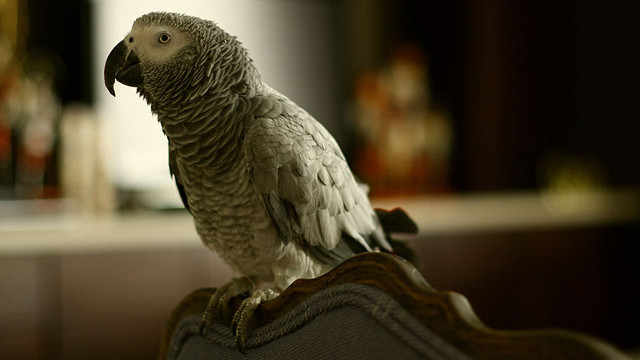 A pet African grey parrotWIKIMEDIA, SNOWMANRADIOA key notion in ethologist Frans de Waal’s latest book is anthropodenial, the a priori refusal to attribute to animals any kind of human-like mental traits. In his best-selling new book, Are We Smart Enough to Know How Smart Animals Are?, de Waal states that anthropodenial has long been the prevailing attitude among scientists and philosophers: in order to preserve the special, exalted position of Homo sapiens they simply move the goal posts each time some behavior is found in animals that had previously been considered uniquely human, such as tool use, self recognition, or empathy. De Waal’s words carry weight, not only among researchers but also among society at large. In this uneasy age of bio-industry, dwindling bio-diversity, animal rights activism, and quick-to-flare sentiments, this saddles him with a special, informal but nonetheless real responsibility.

The essential burden of science is...

In order to make this stick, de Waal redefines intelligence as whatever mental capacities a given species needs within its own Umwelt—its own limited experience of the world. The beauty of this position is that all species are equal, which is why he abhors the term “stupid animal.” Taken on their terms, judging from their needs, all species are optimally intelligent. The downside is that this perspective robs “intelligence” of all meaning, reducing it to the Darwinian notion of relative fitness. Unsurprisingly, in de Waal’s world, even the most mundane of animal achievements are labeled “extremely advanced,” “impressive,” or “sophisticated.”

Truth be told, de Waal does have ample grounds to be angry with—and distrustful of—much of academia. More stupid, shortsighted, and bigoted claims have been made about the position of the human race in the biological world than there are fish in the sea. But none of that is an excuse for going overboard.

His downright unfair treatment of researcher Herbert Terrace is a case in point. During the 1970s, Terrace managed a spectacular attempt at Columbia University to train a chimpanzee called Nim to become capable of using a form of human language. And lo and behold, Nim did indeed seem to make some progress. But long after the project ended, Terrace began to have second thoughts about the whole thing. He had the unusual courage to go back to his many piles of case notes and recordings, only to discover that nothing in Nim’s behavior actually pointed to a grasp of anything linguistic beyond recognizing and using isolated words. Reassessing his data and publishing the sobering conclusions constituted a rare case of academic integrity on par with Émile Cartailhac’s 1902 Mea Culpa d’un Sceptique, in which the then-pope of European prehistoric research publicly admitted that he had unjustly branded the discoverer of the Cro-Magnon wall paintings at Altamira a fraud 20 years before. But here is what de Waal writes: “Terrace found Nim a boring conversationalist.”

Equally misguided are de Waal’s comments regarding the ban on discussing the origin of human language, which the Society of Linguistics of Paris issued in 1866, not seven years after Darwin’s On the Origin of Species had revolutionized the naturalists’ world. De Waal callously dismisses those French linguists as antievolutionary muddlers driven by “intellectual fear rather than curiosity” who “had better pull their heads out of the sand.” But that is hardly fair.

Physiologically, language involves only perishable tissue: brains, a few dozen muscles, and some cartilage. As biologists and paleontologists began tapping into a new evolutionary fundgrube, the rapidly expanding fossil record, linguists were left empty-handed. Nature afforded them no hard pre-historical evidence whatsoever. As a consequence, linguistics soon became swamped by a torrent of speculative, half-baked theorettes by would-be language buffs, fantasists, religious dreamers, and full-blown lunatics. The ban was put in place to end that avalanche, which it did.

Overstatement and overestimation have become hallmarks of de Waal’s discourse. He purports that “elephants make sophisticated distinctions regarding potential enemies to the point that they classify our own species based on language, age, and gender.” In fact, all he shows is that African elephants can pick out adult male Maasai speakers from all other human sounds with some success, associating them with lethal danger.

De Waal credits ravens with the same political savviness he described in chimpanzees many years ago, on the grounds that individuals with many relations—equaling high status—disrupt relations between others far more actively than less well-connected birds do. But why claim so much where mere biological temperamental differences between individual birds suffice? Animals that ruin the relationships of others at an above-average rate automatically end up with an above-average number of relations themselves. Among ravens, it pays to be aggressive and “jealous.”

With great gusto de Waal tells us of “Alex,” the enigmatic miracle parrot who did arithmetic and juggled abstract concepts with the best of them. There is an intriguing clip of Alex, who died in 2007, in which the animal’s only spontaneous activity is to repeat time and time again that it wishes to be returned to its cage. To no avail, there is always one more chore, and Alex complies like a good little parrot. But the animal wasn’t always so obliging.

This behavior of Alex reveals an essential flaw in all those attempts to stimulate animals to show behavior they don’t show of their own accord (and I’m sure de Waal would agree on this point): it is all chores. None of the apes that were trained to become lingual would ever initiate anything like a conversation. Their utterances typically served to secure an immediate reward, usually food or attention—Nim for one, often begged to be tickled. Once a project was over, not one ape continued to use its acquired abilities spontaneously. This raises serious doubts as to whether what we see is actually more than rote learning, tricks we teach the animals to perform by bribing them with food and attention.

Let us not forget that what we get to see, both in popular accounts and in scientific journals, are invariably high-pressure compilations of highlights. The actual case notes of animal researchers, and of those who film and photograph wild animals, are much more like the diary of Louis XVI, the French king who ended up under the guillotine: Monday: rien; Tuesday: rien; Wednesday: rien.

De Waal ignores all this, just like he does not mention the constant pressure needed to keep animals in training with the program. And so he does precisely that which he reproaches others for: he puts the goal posts just where he wants them and then concludes: See? I told you so!

Frans de Waal declined to comment on this article, which was adapted from a version published in NRC Handelsblad in May.

Rik Smits is a linguist and writer based in the Netherlands and the author of Dawn, the Origins of Language and the Modern Human Mind.