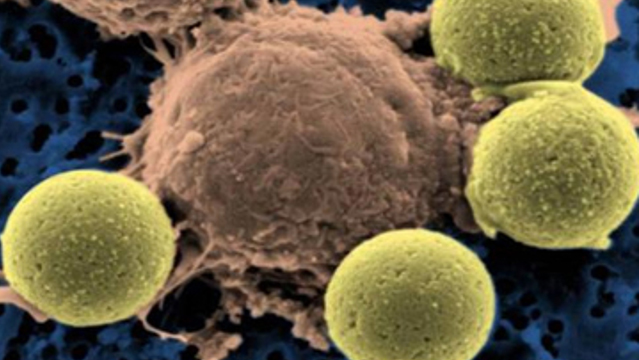 For more than half a century, the treatment of cancer has relied heavily on radiation, surgery, chemotherapy and, increasingly, the use of drugs that target specific mutations within the cancer genome. While these conventional approaches are effective in some patients, there is an urgent need to develop new therapies. Leading the charge are those that harness the immune system’s unique ability to identify and destroy tumor cells.”

One such immunotherapy is chimeric antigen receptor (CAR) T cells, which involves extracting a patient’s own T cells and equipping them with a receptor that targets the cancer cell. CAR T cells are expanded in large numbers in specialized production facilities and then infused back into the patient. There are more than 100 CAR T-cell clinical trials currently being conducted worldwide, and the US Food and Drug Administration (FDA) is expected to approve the first CAR T-cell therapy in...

Despite some promising results, however, a handful of studies have raised significant safety concerns. In one recent trial from Juno Therapeutics, for example, 5 of 68 patients receiving the therapy died during the study. Three patients died after developing cerebral edema—excessive fluid accumulation in the brain; two others succumbed to similar neurotoxicities.

And Juno is not alone. In 2014, there were also deaths associated with the infusion of CAR T cells in lymphoma patients receiving treatment at Memorial Sloan Kettering Cancer Center.

While it is still not clear whether the CAR T cells caused the deaths in any of these cases, the FDA recently announced plans to establish a pilot database to evaluate CAR T-cell safety and identified specific safety-related factors associated with the conduct of clinical trials.

There are also a number of side effects associated with CAR T-cell therapy. The most serious is cytokine release syndrome (CRS), a reversible yet potentially life-threatening condition mediated by the release of interleukin-6, tumor necrosis factor-α, and interferon-γ following immune cell activation. CRS appears to be exacerbated in patients with a high tumor load and is frequently accompanied by macrophage activation syndrome—the uncontrolled activation and proliferation of macrophages—and tumor lysis syndrome—the sudden release of cellular contents into the bloodstream following tumor cell lysis. Fortunately, the effects of CRS can be mitigated by reducing the number of infused CAR T-cells and the use of anti-IL-6 receptor antibodies and steroids.

Another side effect associated with CAR T-cell therapies that specifically target the B cell-specific marker CD19 for the treatment of blood cancers—the most popular approach so far—is B-cell aplasia, or loss of B cells. This can be alleviated by infusions of gamma globulin, naturally-occurring antibodies that are required to provide protective immunity to bacteria and viruses. And some patients receiving non-CD19-targeted CARs have experienced serious toxicities because the same target is expressed on healthy cells as well as cancerous ones.

Finally, in addition to these side effects documented in the context of clinical testing of CAR T-cell therapies, the long-term persistence of CAR T cells risks the occurrence of insertional mutagenesis—possible mutations that can occur over time when the CAR construct is inserted into the human chromosome—and B cell aplasia, leading to reduced ability to combat infections. Clearly, if CAR T-cell therapies are going to become a go-to treatment, these safety issues need to be better understood.

In contrast to treating blood cancers, treating solid tumors with CAR T-cell therapies is not so straightforward. The modified T cells must home to specific disease sites, requiring good molecular targets, which are currently lacking. Moreover, the dense matrix of stromal tissue limits immune cell infiltration and the tumor microenvironment is notoriously immunosuppressive.

But there is reason for optimism. There are exciting new developments in target discovery with the identification of neoantigens that arise as a consequence of tumor-specific mutations and the  identification of a new class of glycosylated Tn/sTn epitopes—the simplest O-glycan structure is the Tn antigen, further modification results in sialylated Tn or sTn, which are widely expressed in cancer cells. The Tn glycan on mucin 1, a glycoprotein, is expressed on ovarian, breast, and pancreatic cancer cells, and CARs specific for this glycosylated epitope have shown impressive antitumor activity in preclinical xenograft studies.

Meanwhile, a variety of strategies have been developed to enhance the activity of CARs and counteract the suppressive tumor microenvironment. Enhancing the infiltration and potency of tumor infiltrating lymphocytes is a central tenet of immunotherapy and is known to correlate with favorable clinical outcomes. The expression of chemokine receptors is critical to getting immune cells to the disease site and immunomodulatory cytokines and costimulatory ligands help to improve the activity of the cells once they reach the tumor. CARs engineered to co-express immunomodulatory cytokines or costimulatory ligands have shown enhanced antitumor activity in preclinical models.

Not surprisingly, efforts are underway to evaluate the safety and efficacy of CAR T cells in combination with checkpoint inhibition or targeted therapies and initial results suggest this approach has the potential to significantly improve therapeutic responses. The use of CRISPR/Cas9 gene-editing techniques to selectively delete negatively regulating genes—ones that suppress the immune response—such as PD-1, may improve the survival and antitumor activity of CAR T cells within the suppressive tumor microenvironment. This approach is also being used to create CAR T cells that lack endogenous T-cell receptors, reducing the likelihood of graft-versus-host-disease and offering the potential for “off-the-shelf” universal CAR-based therapies.

Innovative approaches to CAR T-cell design are also being developed to reduce the possibility of undesirable side effects and improve temporal control of CAR T-cell activation in vivo. A number of different suicide genes or safety switches have been incorporated into CAR design and are being evaluated in clinical trials. These include inducible caspase-9 systems in which administration of pharmacologic agents can induce apoptosis in the CAR T cells.

Finally, bispecific CARs, which express specificity for two different tumor antigens, may reduce the possibility of off-target toxicity and limit the chance of tumor escape due to target antigen downregulation, as has been observed with CD19 in some cases.

The culmination of many years of research has seen the development of the first wave of CAR T-cell therapies. The next decade is likely to see major advances in CAR T-cell design and manufacturing processes, which will hopefully lead to improved safety and clinical outcomes for increased numbers of patients with a broader spectrum of cancers.

David Harris is a research director for Charles River Discovery Research Services site in Morrisville, North Carolina, where he specializes in immunology, pharmacology, and preclinical drug discovery for cancer.