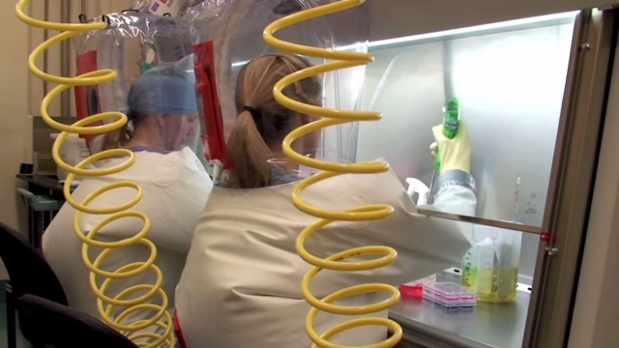 WIKIMEDIA, NIAIDFrom the early days of space exploration, NASA assumed that astronauts could encounter extraterrestrial microorganisms during their missions. Would these organisms be entirely alien? Could they be detected? If they caused disease, could astronauts learn enough about them to determine treatments?

Over time, NASA innovations led to the development of detectors now used on the International Space Station (ISS) to locate and eradicate colonies of organisms before they interfere with astronaut health or ISS functioning (a remarkable lab-on-a-chip). Others approached the challenge from the perspective of life functions. For example, instead of trying to identify an entire organism, a detector could find evidence of biomarkers, metabolism, or even sound.

Exposure to novel microbes is not just an extraterrestrial concern. Pathogens seriously impact human health each day. Biodefense is the field of activity in which we work to predict, prevent, and respond to major infectious disease threats, whether they...

Much like the space program, success in this venture will require an enterprise: a sweeping set of individuals and institutions with wide-ranging capabilities, working together to achieve specific goals. But in biodefense, federal agencies and many companies often work alone. We need a comprehensive strategy combined with political and governmental know-how in the White House and in Congress to make the most of the funding to defend against intentionally introduced, accidentally released, and naturally occurring infectious diseases.

In 2014, we convened the bipartisan Blue Ribbon Study Panel on Biodefense—with Hudson Institute and the Inter-University Center for Terrorism Studies at the Potomac Institute for Policy Studies as institutional sponsors—to examine the state of our preparedness and develop responses to shortcomings. In our report “A National Blueprint for Biodefense: Leadership and Major Reform Needed to Optimize Efforts,” released today (October 28), we make it clear that it is time to centralize leadership and take a different approach to biodefense—one in which the entire biodefense enterprise is understood and driven by a central leader, its elements interconnected, and which values innovation, not as an end, but as a means. We elaborate on four areas in which either technological innovation or innovation in our governance of biodefense problems can lead to substantially beneficial developments: prioritizing innovation over incrementalism in medical countermeasure development; developing a modern biodetection and biosurveillance system capable of rapid identification; overhauling the Select Agent Program to meet new accountability needs in the 21st century; and building a global public health response apparatus predicated on public-private partnerships.

Astronomer Neil deGrasse Tyson has spoken of the virtues of “an innovation culture,” a culture that does not silo efforts by putting money toward solving singular problems in the short-term, but whose innovative investments transcend a single election cycle and provide broad benefit. This is precisely what a strategic, unified-budget approach to biodefense can accomplish. Innovation is not an office buried somewhere in the federal government—it is a state of mind, a cultural value proposition from which we can better defend against the threats of today and tomorrow.

Joe Lieberman and Tom Ridge cochair the Blue Ribbon Study Panel on Biodefense. Lieberman (D-CT) served 24 years in the United States Senate, where he spent six years as Chairman of the Senate Committee on Homeland Security and Governmental Affairs. He was the Democratic Party’s Vice Presidential nominee in 2000. Ridge (R-PA) was the nation’s first Secretary of Homeland Security. He also served as the 43rd Governor of Pennsylvania and six terms in the United States House of Representatives.