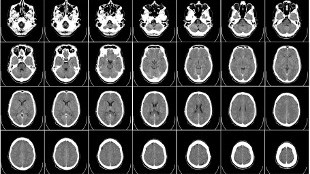 WIKIMEDIA; UPPSALA UNIVERSITY HOSPITAL, MIKAEL HÄGGSTRÖMA group of men exit a city hotel and begin making their way to a waiting car. As they approach the vehicle, another man opens fire on the group from 10 feet away, intending to kill one of them. Four men are wounded before the attacker is subdued by bystanders.

Imagine you’re a juror in the shooter’s trial for attempted murder.

At trial, the shooter’s legal team pursues the insanity defense. The defense argues that, at the time of the offense, the accused—due to mental disease or defect—lacked substantial capacity to appreciate the wrongfulness of his actions or to conform to the requirements of the law. In support of this contention, the defense presents you and your fellow jurors with an image of the accused’s brain from a computerized axial tomography (CAT) scan. Accompanying this picture is the testimony of a defense expert, a...

To counter the defense’s presentation, the prosecution calls up another neuroradiologist, who says that the accused’s brain looks perfectly normal and many mentally healthy individuals exhibit the same brain structure.

This case was real. It was that of John Hinckley, Jr., the attempted assassin of then-President Ronald Reagan in 1981. Hinckley tried to kill the president because he thought it would impress the actress Jodie Foster, whom he had become obsessed with after seeing the movie Taxi Driver.

As a juror tasked with determining a person’s criminal culpability, what has the aforementioned evidence told you about Hinckley’s sanity at the moment he opened fire in front of the hotel?

To accurately answer this question, certain basics about criminal law and neuroimaging are key.

Under most modern legal systems, crimes generally consist of two core elements that must be proven: a criminal act (actus reas) and mental state (mens rea). Individuals can avoid liability despite committing a crime’s requisite act if it is shown that they did not possess the necessary mental state—i.e. a “guilty mind”—at the time of the offense. Put simply, an individual is only guilty of murder if she intended to kill the victim.

Defendants can also avoid conviction if they were legally insane at the time of the crime. In a recent Journal of Legal Analysis study, my colleagues and I noted that the majority rule for the insanity defense among American criminal codes is that “an actor is not responsible for criminal conduct if at the time of such conduct as a result of mental disease or defect he did not know his conduct was wrong.” This means a defendant must “not know” her conduct was wrong rather than simply “lack substantial capacity to appreciate” its wrongfulness. Consideration of whether a defendant was able to control her actions is excluded. While this majority language is stricter than that applied in the Hinckley case, overall, legal insanity hinges on the extent of an individual’s mental deficiencies. If they are severe enough, the accused will be spared criminal liability.

Given that mental state and capacity are such integral parts of criminal law, and the brain is the arbiter of these faculties, it is logical to conclude that presentations on the condition of this organ should be part of criminal proceedings. Neuroimaging allows for this.

There are generally two types of neuroimaging: structural and functional. Structural imaging is like X-raying a person’s head. Techniques such as CAT scans and magnetic resonance imaging (MRI) produce pictures of the static structure of a person’s brain. Functional imaging, on the other hand, turns out pictures and videos of brain activity. Methods like functional MRI (fMRI) and positron emission tomography (PET) track blood flow and brain metabolism, respectively, to determine which areas of the brain are active during certain tasks, and to what degree.

Advances in neuroimaging capabilities have had a priceless impact on our understanding of the brain. The analyses made possible by these innovations have fielded incredible correlative and statistical data, linking what people think and do to specific brain structures and activities. But correlation is not causation, and these data have significant limitations when applied to an individual at a criminal trial.

First, neuroimaging techniques produce pictures of a given brain at one point in time. At trial, however, we are concerned with an individual’s mental faculties when he committed the crime.  Therefore, post-hoc imaging provides little evidentiary value.

Second, firm causal links between physical brain abnormalities—whether structural or functional—and mental characteristics are thus far largely lacking. While some irregularities, such as tumors or unusual metabolic activity in certain brain regions, correlate with deviant thoughts and behavior, there are also many people who possess these characteristics without engaging in either.

With these issues in mind, let’s return to the case and question presented at the beginning of this article: What did the neuroimaging evidence tell you about Hinckley’s mental state when he opened fire?

It’s true that, on average, the brains of people with schizophrenia are more atrophied than those of the general population. But non-schizophrenic individuals also experience this. What’s more, how does the image of Hinckley’s atrophied brain support him being unable to form an intent to kill, tell right from wrong, or conform his actions to the law back when he pulled the trigger? It doesn’t. It simply displays his brain at the moment the image was taken, and offers no insight into how much control he had over his actions or what he was thinking—or capable of thinking—at that time. To establish his mental state when he committed the crime, his own testimony and that of experts who have analyzed him and other witnesses are much more helpful.

While Hinckley’s reasoning for his actions was certainly outlandish, and he was diagnosed with severe mental conditions, he knew killing another human being was wrong and engaged in extended deliberation over and preparation for the murder attempt.  It is widely asserted that the CAT scan introduced no meaningful evidence to these determinations.

Still, Hinckley received the insanity defense from a jury of his peers, and most observers agree that the neuroimaging evidence was instrumental in securing it.

Studies have shown that exposure to neuroscience explanations—specifically, neuroimaging in certain circumstances—can unduly influence perceptions and decision-making. This makes many legal practitioners and scientists wary of the ability of judges and juries, who lack neuroscience training, to understand and weigh such information. They worry that this complex evidence can appear overly authoritative and that these decision makers will apply it improperly.

Both the actual evidentiary value and possible influence of neuroimaging evidence are why discussions concerning its place in criminal trials are so significant, and why it’s important that you imagine yourself judging someone using this information. This is not simply an intellectual exercise, but a demonstration of a real scenario that is increasing in prevalence within the legal regimes that govern us.

As our ability to image the brain becomes ever greater, debates over the use of neuroimaging at criminal trial will likely intensify. Such conversations must be grounded in neuroimaging’s actual capabilities and the benefits and drawbacks of bringing this evidence into courtrooms to determine criminal responsibility.

Andreas Kuersten is a law clerk at the United States Court of Appeals for the Armed Forces in Washington, DC.

Correction (November 24): This article has been updated to correct a typo in the third-to-last paragraph. (The word “weary” was written when “wary” was meant.)