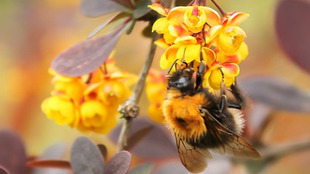 PIXABAY, GABORFEJESTo keep them aloft, the wing beat of honey bees is 170 to 270 hertz (Hz). Yet while producing a soft humming sound, it is out of tune with flowers that require vibrations around 400 Hz to release their pollen.

Bumblebees, on the other hand, are buzz pollination pros, delivering the rapid vibrations to flowers that tomatoes, peppers, cranberries, blueberries and red clover—to name a few—need. Bumblebees also work harder and at cooler temperatures than honey bees, and visit nectar-less flowers, which honey bees shun. Thanks to bumblebee pollination, tomato plants, for example, produce more and bigger, juicier fruit.

In the early 1900s, to ensure pollination, growers using hothouses to produce vine-ripened fresh market tomatoes either strummed string tied to the stems or gently shook the flowers with a bit of rabbit’s tail on a stick. After World War II, growers began using bee wands, similar to an...

Good for business, bad for bees

While that was a welcome game-changer for the tomato hothouse industry, bombiculture led to transport and proliferation of bee diseases. Commercial colonies around the world have higher rates of infection, by such parasites as the trypanosomal protozoan (Crithidia bombi), the pathogenic fungus (Nosema bombi), and a tracheal mite (Locustacarus buchneri), than wild colonies. For instance, C. bombi is a gut pathogen that takes a serious toll on a bumblebee queen’s ability to establish a colony, and the foraging efficiency of workers and their survival. Normally, wild populations of bumblebees, with colonies highly dispersed across the landscape, have infection rates far less than 10 percent, but commercial colonies, having much higher density of bees, typically have rates of 20 percent. When commercial bumblebees inadvertently leave a hothouse during a foraging trip, they then visit the same flowers as the wild bees, invariably inoculating some with the bee diseases of the commercial colony. Research has shown that pathogen spillover from hothouses explains the rise of infection in wild bees, and its contribution to the decline in bumblebee populations. Such studies prompted the International Union for Conservation of Nature (IUCN) in February 2013 to state emphatically that the global trade in bumblebee colonies for crop pollination has resulted in the establishment of bumblebee species outside of their native range and, in turn, the parasites from commercial bumblebees have been introduced around the world, with serious impact on native bumblebees.

Habitat destruction, pesticide use, alien competitors, and climate change also contribute to native bumblebee decline. A North American study of eight bumblebee species showed that the range of four of them has shrunk by 23 percent to 87 percent. This year, the IUCN reported that 16 of 68 bumblebee species in Europe, including three important crop pollinators, are now at risk of extinction.

But it is not too late to help native bumblebees. First, we can support bumblebee habitats. The Xerces Society for Invertebrate Conservation and the Bumblebee Conservation Trust have released handy resources, such as making flowers bumblebees like available over spring and summer and conserving good nest sites. Second, hothouse growers should use native buzz pollinators rather than import non-natives. Australia, for example, which has no native bumblebees, does not allow importation of non-native bees. There, native buzz pollinators, such as the blue-banded bee, are being developed for commercialization. Third, the commercial bee industry must certify that colonies are pest-free. Although robotic bees have been suggested as a remedy to the world-wide declining populations of pollinators, robotic bees are not a viable solution for crop pollination. Such pollination would require huge armies of robotic bees, directed by sophisticated computer programming, an expensive proposition for most of the world’s growers. And it would not save thousands of other plants that depend on bumblebees.

Nancy Stamp is a professor of biological sciences at Binghamton University–State University of New York, employing as a research system tomato and insects using tomato.