ABOVE: Laboratory buildings designed by architect Louis I. Kahn at the Salk Institute in California
© ISTOCK.COM, ABLOKHIN

Scientists and architects collaborate during the construction of research buildings, but often lack a common language to discuss requirements and features. As a result, upon completion, buildings often require frustrating and expensive renovations to make them research-ready. Designers generally employ a “human-oriented” approach to constructing research buildings, and don’t pay enough attention to lab operation needs. Unsurprisingly, most input regarding lab space is provided by university higher-ups such as presidents and tenured faculty. Meanwhile, those who will be spending years toiling inside these spaces–the technicians, postdocs, and graduate students–are not asked for input nearly enough. Balancing these groups’ different requirements is a challenging task, and practicing researchers should provide more input moving forward. Here we suggest ways in which such interactions can work, and tools scientists can use to contribute during the planning process for labs that will serve as their intellectual homes.

Articles on the design of lab buildings tend to center on the perspectives of architects and designers, who discuss goals and ideas for buildings in specialized magazines and sometimes in general scientific journals. One can learn the opinions of project managers or those of a principal architect, but there are virtually no published reviews of buildings or the working conditions within them from the perspectives of end users. The disconnect between end users and architects tends to materialize as suboptimal design decisions, which can create additional costs.

Researchers, especially experienced technicians, can provide invaluable insight into space organization and practical features, and can help envision how the final product will be inhabited and used. One important example today is over-provisioning of IT infrastructure to accommodate an ever-increasing volume of data generation. In one building at the University of Southern California, completed in 2007, the plan called for 10 Mbps network connections, but the plan was reluctantly upgraded to 1 Gbps after input from researchers. A building finished a decade later on the same campus had plans for very limited physical networks (1 Gbps), as architects assumed that infrastructure allowing cloud-based computing and wireless internet would be sufficient. However, experienced researchers, especially those working with microscopes, recognized that such plans were not adequate for present needs and didn’t allow for future upgrades. Working together, end-users were able to make the case for more flexibility, with 10 Gbps ethernet and optical fiber networks. An additional benefit of installing optical fiber is future-proofing, as this infrastructure can support networks of up to 40 Gbps. Installing optical cables early on was much more cost effective in the long run than upgrading later.

Another building design necessity that’s often inadequately factored in at the planning stage is air conditioning power. In a newly completed neuroscience building on the Caltech campus, for example, major, post-construction adjustments had to be made to rooms accommodating heat-generating equipment such as incubators, cryogenic units, and shakers. Original design plans assumed lab equipment to be less powerful than it actually is. This situation could have been avoided by consulting lab managers and researchers earlier in the planning process.

Sometimes the problem of effective collaboration during the planning and construction of research buildings comes down to differences in the vocabularies of architects and scientists. The term “microscope” is a prime example of these differences. Architects commonly envision a simple clinical light microscope, whereas the scientists might be referring to powerful heat-generating computers and lasers requiring substantial climate control, blackout curtains, specific amperage outlets with backup power. Conversely, architectural jargon may not be familiar to scientists. An example of this was the initial lack in Caltech research buildings of what are known a “double-egress doors with crash-bars” allowing for hands-free movement both ways through lab spaces or “transom windows” running near the ceiling of interior office spaces that direct natural light inside. These two items were added to Caltech buildings only after a scientist who noticed and inquired about them at another academic campus suggested installing them at Caltech as well. 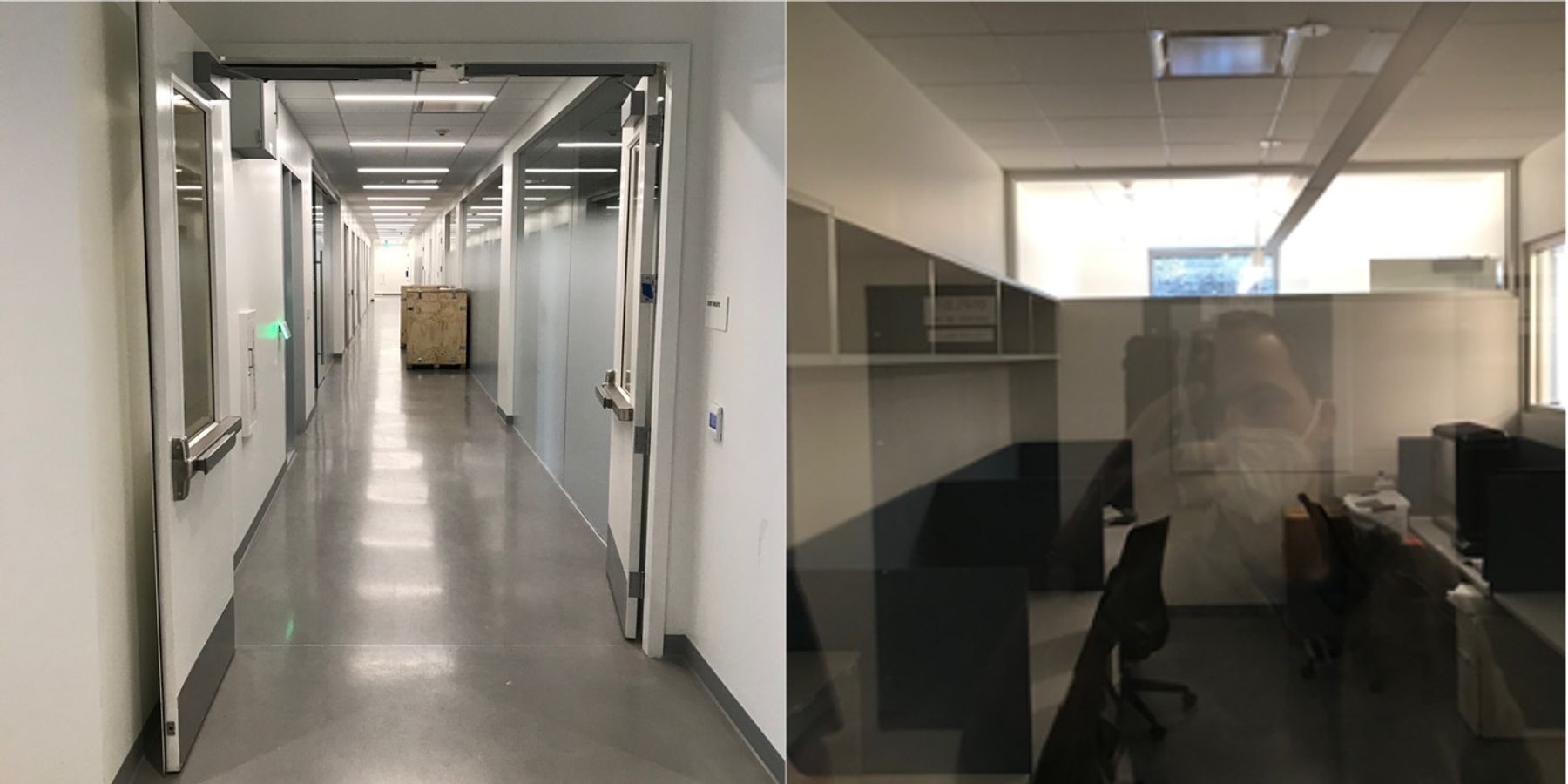 Useful elements of design might have esoteric names. Double-egress doors (which open both ways) with crash bars (enabling them to be opened hands-free) are very useful for researchers when they transport materials or move carts (left). Transom windows at the ceiling allow natural light into “internal” spaces that might otherwise only have artificial lighting (right).
ANDREY ANDREEV

Without shared language, effective, collaborative communication during design stages requires extra work and preparation. Researchers undertaking building planning can compile flash cards describing desired features, something we prepared during the writing of this article. Working with peers from other institutions whose buildings have their own strengths and weaknesses would enhance such a flash card library, as research architecture is very collaborative in nature and practice. In the future, labs from around the world could share these libraries and help architects focus on what scientists value within a research building, providing visual terminology to be understood by both sides in the design process.

Scientists can record design elements that they like, and ask colleagues from other institutions for input, in order to provide architects with tangible examples. One example is a compact library of cards that can be brought to meetings with architects.
ANDREY ANDREEV

Planning and constructing research buildings is a complex process involving multiple stakeholders, sometimes with opposing priorities. For example, to save energy, lights are usually motion-activated, which might be acceptable in administrative offices, but impractical in a research lab, or in microscopy or behavioral experimental rooms. In a lab environment, the need for a simple mechanical switch offering control for researchers may not be obvious to designers. Missing small details like this might seem insignificant, but these small inconveniences add up, causing frustration—and can be costly to resolve later.

Interior design also requires input from scientists. The architectural design default for modern lab spaces is adjustable height desks, as seen at both the University of Southern California and Caltech. Useful on paper, these desks rob scientists of overhead storage space, the desk area becomes more open, prone to increased noise from the surroundings. This loss of storage prevents easy access to books and papers, requiring treks to the nearest shelving. Some researchers go as far as relocating office chairs, tables, and portable storage from previous lab spaces, removing expensive new furniture to building basements and closets. Here again, increased collaboration and more effective communications between architects and scientists would enable a more useful and practical workplace.

The market for biotech research facilities keeps growing, and we are all appreciative that universities are updating buildings and facilities. Input from many parties, including university administration, users, architects and planners, facilities personnel, and donors also needs to be considered during this process. The balance of this attention, however, needs to be shifted more toward hands-on researchers, especially those with most experience, to provide a higher quality architectural design and subsequently less stressful work environment and to facilitate the best possible research outcomes.

Andrey Andreev is a postdoc at Caltech with previous experience working in basements of research buildings in Russia and at Stanford University and the University of Southern California. Barbara Perry is a research technician in the Sternberg lab at Caltech, where she manages bio libraries, cryo units, and other equipment and takes care of the lab during closures and shutdowns. The authors thank Daniel Davis, Don Weinreich, Jeffrey Kiplinger, and Blair Smith for help in preparation of this article.