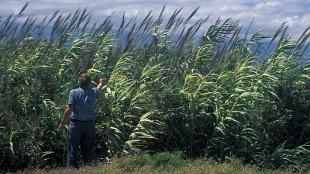 Giant Reed (Arundo donax). Wikimedia, Forest and Kim StarrGiant reed (Arundo donax), commonly known as Carrizo cane in Texas, is a bamboo-like plant that can grow up to 10 meters (33 feet) tall. It was intentionally introduced to California in the early 1800s from the Mediterranean for erosion control along riverbanks and for use in thatching and basket weaving. This invasive weed has gradually spread throughout the southern half of the United States, all the way to Maryland, wreaking havoc on native ecosystems along the way.

To support its rapid growth rate, giant reed consumes large amounts of water compared to native vegetation, threatening to worsen the water shortage in places like the Rio Grande Basin, where the densest stands of giant reed are found. It reduces arthropod diversity and abundance and destroys wildlife habitat. The stems and leaves of the plant contain several toxic...

Of course, there are many stories that start like this. Invasive species are notorious for outcompeting local flora and fauna. But giant reed isn’t just an ecological threat; it is also a major impediment to border patrol operations of the US Department of Homeland Security’s Customs and Border Protection.  Along the international border between Laredo and Del Rio, Texas, giant reed is overrunning border access roads, reducing visibility, and providing dense cover for illegal activities. In 2007, Homeland Security Department officials called for an immediate operational plan to control the reed’s growth.

Mechanical control methods, such as cutting, chopping, and mowing, have been ineffective and costly to implement, and chemical treatment can impact surrounding vegetation and water. Biological control with insects from the native range of giant reed may be the best strategy for long-term management of this invasive weed. Several agents have been introduced from Europe. Two agents, the Arundo wasp (Tetramesa romana) and the Arundo scale (Rhizaspidiotus donacis), were evaluated and found to be specific to giant reed and unlikely to harm native or cultivated plants in the Americas, and greenhouse studies have shown that both agents have the potential to significantly damage giant reed by suppressing leaf and stem growth.

The wasp and the scale have been released at selected sites along the Rio Grande since 2009 and 2010, respectively. Although the effects of the biological control agents on giant reed along the Rio Grande will not be known until sufficient populations of these agents are established, we can gain clues by monitoring how the plants are doing as these insect populations bloom. To accurately assess the growth and water use of giant reed along the Rio Grande, I teamed up with James Everitt, a retired US Department of Agriculture (USDA) rangeland scientist, and John Goolsby, a USDA research entomologist in Kerrville, Texas, to use satellite and airborne remote sensing imagery to quantify giant reed’s distributions in the Basin. Since giant reed has significantly higher near-infrared reflectance than other vegetation in the area, we can accurately distinguish it from associated plant species and quantify its distribution and density using aerial color-infrared photography and satellite imagery. We published our results in Invasive Plant Science and Management  and Journal of Applied Remote Sensing, and the aerial photographs and imagery we obtained are also being used as the guide for the planning and release of biological agents for the control of giant reed along the river.

The data can also be applied to other aspects of the giant reed problem. The area estimates for giant reed infestations along the U.S.-Mexico portion of the river have been used by Texas A&M University scientists for economic analyses on water loss from giant reed along the river. Their regional economic model of the Rio Grande Basin estimated that if water currently used by giant reed were diverted towards agricultural crops, it may yield farm level benefits ranging from $98 to $160 million over a 50-year period, not considering the potential benefits to border security, ecosystems, the environment, and recreational activities. As the data from continued biological control and remote sensing studies roll in, hopefully we will be able to most effectively manage this invasive weed and shunt at least some of this water to where it’s needed most.