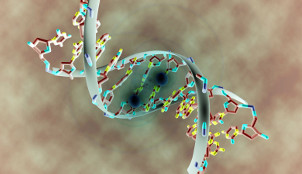 WIKIMEDIA; CHRISTOPH BOCK, MAX PLANCK INSTITUTE FOR INFORMATICSOur desire to manipulate genomes is not new; selective breeding, genetic and, more recently, genome engineering have greatly advanced our understanding of how genes shape phenotypes. However, epigenetic processes also influence how cells use genetic information. Like pointing out sections of a book with colored tags or Post-Its, the cell physically sticks chemical tags onto the genome, labeling features such as genes or regulatory elements. To date, millions of these tags—chromatin marks—have been profiled across different tissues and cell types through international efforts. Yet, until recently, we were not able to assess the influence of individual marks on gene activity because it was only possible to alter chromatin marks globally through mutational approaches or pharmacological inhibition. Emerging technologies for epigenome engineering now make it possible to interrogate the function of individual chromatin marks by adding them to, or removing them from, single...

Targeted modification is achieved by fusing an existing chromatin modifying enzyme (or a functional part of such an enzyme) to a programmable DNA binding domain. Although programmable DNA binding domains have been around for some time, the recent appropriation of the bacterial CRISPR/Cas system from Streptococcus pyogenes has made it considerably easier to generate a targetable protein in the laboratory: the chromatin-modifying enzyme of choice is simply fused to the catalytically-inactive Cas9-protein (dCas9). dCas9 is then targeted to a specific genomic locus via a separate, synthetic RNA molecule known as the guide RNA (gRNA). The base sequence of the gRNA thus determines the DNA binding specificity of the fusion protein. A range of chromatin modifiers have already been engineered in this way, allowing researchers to address some fundamental questions concerning the functions of individual chromatin marks.

It has long been unclear which of the large number of catalogued chromatin marks possess real gene-regulatory capabilities. Evidence to date has mainly been based on statistical correlation of chromatin marks with expression levels of associated genes. While a causal role of some chromatin marks in transcriptional regulation could be convincingly demonstrated for a few model loci, it has long been unknown whether these specific findings extended to the vast remainder of the eukaryotic genome.

By directing chromatin modifiers to a range of sites at different genomic loci and measuring resulting changes in transcription of associated candidate genes, a number of functional chromatin marks have now been identified. For example, removal of methylation from lysine4 of histone H3 at putative enhancers and promoters with dCas9-LSD1 results in downregulation of proximal genes , while addition of histone acetylation using dCas9-p300 has the opposite effect.

Collectively, these pioneering studies show that manipulation of individual chromatin marks at relevant sites can significantly alter levels of transcription, and that this effect depends both on the enzymatic activity of the chromatin modifier and its guided binding to the target site. However, the biological relevance of these engineering efforts must still be established. Measuring changes in protein levels or phenotypic changes in addition to changes in mRNA levels,  or comparing engineered gene expression to physiological levels of activity should ensure that changing specific chromatin marks can indeed influence cellular behavior.

The use of targetable chromatin modifiers has ushered in a new era of functional epigenomics. We anticipate that it will soon be possible to dissect the effect of altering combinations of chromatin marks by using different targeting platforms that can function independently in the same cell. The ease of targeting chromatin modifiers through an RNA-based DNA binding mechanism will further enable the unbiased discovery of functional marks using screening approaches. Many potentially functional marks could thus be interrogated in a single experiment, and only sites where chromatin modifications have significant impact—not only on transcription, but also on phenotype—may be identified in this way. Eventually, some of the findings may be translated into therapeutic use by adopting epigenetic engineering technologies to in vivo situations. There are already first indications that this may be feasible, provided, of course, that reagents can be delivered into cells efficiently.

This article was adapted from a commentary published June 19 in Genome Medicine.

Anna Köferle is a PhD student at University College London, where Stephan Beck, a professor of medical genomics, is her adviser. Stefan H. Stricker is head of the functional epigenetics group at Ludwig-Maximilian-Universität in Munich, Germany.