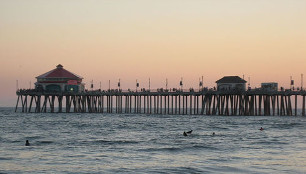 Huntington Beach pierWIKIMEDIA, SAMEERKHANIn response to the pressures of climate change, drought, a growing population, and dwindling water supplies, desalinated seawater is poised to become an important source of potable water in California. The state’s first large-scale desalination plant recently started commercial production of 50 million gallons per day of fresh water in the city of Carlsbad, and several additional plants are proposed to be built along the California coast in the coming years.

Because of concerns about the environmental impacts of desalination, a regulatory framework for this industry has rapidly developed. These regulations pertain to a variety of environmental issues (including construction impacts, brine discharge, et cetera). Here I focus on the environmental impacts of seawater intakes. As part of the desalination process, large volumes of saltwater are removed from the ocean and converted to freshwater through reverse osmosis. Of course, ocean water contains planktonic organisms, including the eggs and larvae of commercially important marine species.

Currently there is controversy surrounding a proposed desalination plant at Huntington Beach that would provide 50 million gallons of potable water per day to Orange County. For the Huntington Beach site, state environmental regulations stipulate the use of a specific intake technology known as a seafloor infiltration gallery (SIG). Basically, a SIG is a type of subsurface intake, consisting of an array of buried pipes that draws water through the sand on the seafloor. Based upon the assumption that this system of filtration will reduce or eliminate the intake (and subsequent mortality) of plankton, subsurface intakes like SIGs are considered the best available technology, and are mandated for use at all new desalination plants in California, unless proven infeasible.

The widespread perception that SIGs eliminate plankton mortality is troubling in view of the lack of evidence supporting this idea. An exhaustive search of both peer-reviewed and industry literature reveals that, to date, there has not been a single study that has experimentally demonstrated a reduction in plankton mortality through SIG use, compared with other intake technologies.

Moreover, the construction of a SIG at Huntington Beach would require the excavation of more than 26 acres of native seafloor to a depth of several meters, resulting in significant loss of seafloor habitat and benthic organisms, with unknown ecological consequences.

Even the basic functionality of a SIG is difficult to verify. Globally, there is only one relatively small SIG in use (at the Fukuoka Desalination Plant in Japan), which operates at 25 percent of the capacity of the proposed Huntington Beach plant. There is no reliable documentation regarding its successful performance as an intake, much less its impacts on the marine environment.

When confronted with this lack of evidentiary support, SIG proponents regress to the argument that it is theoretically possible that SIGs will minimize mortality to marine life.

This is not a rational, scientific approach to legislating one of California’s most promising pathways to water sustainability. The mandated use of any particular desalination technology should be based upon a strong foundation of documented results, not unsupported assertions, lest we discover that well-intentioned efforts to reduce marine life mortality have done more harm than good.

Daniel Cartamil is a marine biologist at the Scripps Institution of Oceanography and an environmental consultant specializing in desalination-related environmental issues. He has consulted both for desalination operators in southern California and various environmental groups, some of which are opposed to desalination.