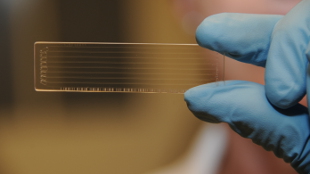 NHGRI, MAGGIE BARTLETTI still remember the moment I first realized I wanted to be a biologist. My high school biology teacher was showing us a time-lapse video of a developing frog embryo and I wondered, how could a single spherical cell become a whole tadpole? I was hooked.

My undergraduate and master’s degree programs in my home country, India, did allow me to do some basic research on limited funds. For the most part, though, my early education consisted mostly of book learning–based exams. While my fellow students and I complained at the time that these tests weren’t adequately preparing us for our futures in research, such studying taught us the value of understanding detail. Understanding the basic biology I learned at that time continues to help me today. As I swim in the ocean of large genomic data, this fundamental knowledge keeps me afloat and helps me to...

Like most Indians of my generation, I looked westward for the pursuit of a higher degree. But I kept hearing horror stories (many hyperbolic, no doubt) about funding cuts leaving many students struggling in the U.S. Meanwhile, I learned that Singapore was investing heavily in biomedical research. Before moving there, the few things I knew about Singapore included that it was great for shopping and that it had banned chewing gum.

Like a small-town resident visiting a big city for the first time, I was blinded by the opulence of Singaporean science. In India I had to seek approval from three different administrators to buy a $10 reagent, but as a PhD student in Singapore I could order $3,000 in reagents and nobody would bat an eye. For the first time, I saw what big science was. I saw how ideas could flow freely and be implemented when unshackled from the grant-writing cycle. My advisor encouraged me and my fellow students to think big and learn as many skills as we could. As a young researcher, these were the best of times. I learned how to ask relevant questions and how to find the solutions to them. I realized the value of collaborative, cross-disciplinary research and how quickly science moved if everybody pulled in the right directions.

But there are no free lunches. The Singapore government was very clear that it wanted commercial returns from this unprecedented funding in basic biomedical research—within 10 years’ time. This was my first exposure to academic institutes being run like corporations and introduction to acronyms like KPI (key performance indicator) and KOL (key opinion leaders). It was an eye-opener for me—that basic science could be considered an engine for a country’s economic growth.

As I completed my PhD, another fortuitous incident happened. I heard a human geneticist who was working in United States lament about an inability to functionalize genes associated with many types of diseases. Moving on from developmental biology, I turned my attention to human genetics and boasted to PIs that I was the right person to quickly ascertain the functions of genes (how naive and pompous). I suppose my current boss decided I was the right kind of crazy person he was looking for when he offered me a job as a postdoc in his lab at Johns Hopkins.

My scientific journey in the U.S. has been fascinating so far. It is has been a mix of my experiences in Singapore and India. Compared to Singapore, here the scientific community is large. Scientists in the U.S. are generating many exciting ideas, but are being hit by funding cuts. Yet I have seen people finding ways around bureaucratic roadblocks to get the work done.

While at Johns Hopkins, I have seen the good and bad side of National Institutes of Health (NIH) funding. I have observed the craziness that ensues as grant deadlines loom and the negative impact it can have on lab members’ morale. I have witnessed the death of some big ideas that went unfunded. I have seen a concerted push by the NIH to fund more translational research.

On the other hand, I have seen the desire to think outside the box and to pool resources to make a big idea work. I have seen a genuine desire to pursue basic research and, sometimes, when basic scientists and physicians come together, magic does happen.

In my wanderings across countries, I’ve learned that it is important to embrace change and take leaps of faith. The very nature of research and training is changing, and demands are being made to produce more results on limited resources. This begets a concerted effort from both the scientific community and the funding agencies to find common ground and pull in the same direction. And this will require us to continually adapt to new ways of doing science.

Sumantra Chatterjee is a postdoc at the Johns Hopkins University School of Medicine in Baltimore, Maryland, where his research focus is on understanding genes implicated in complex human disorders.