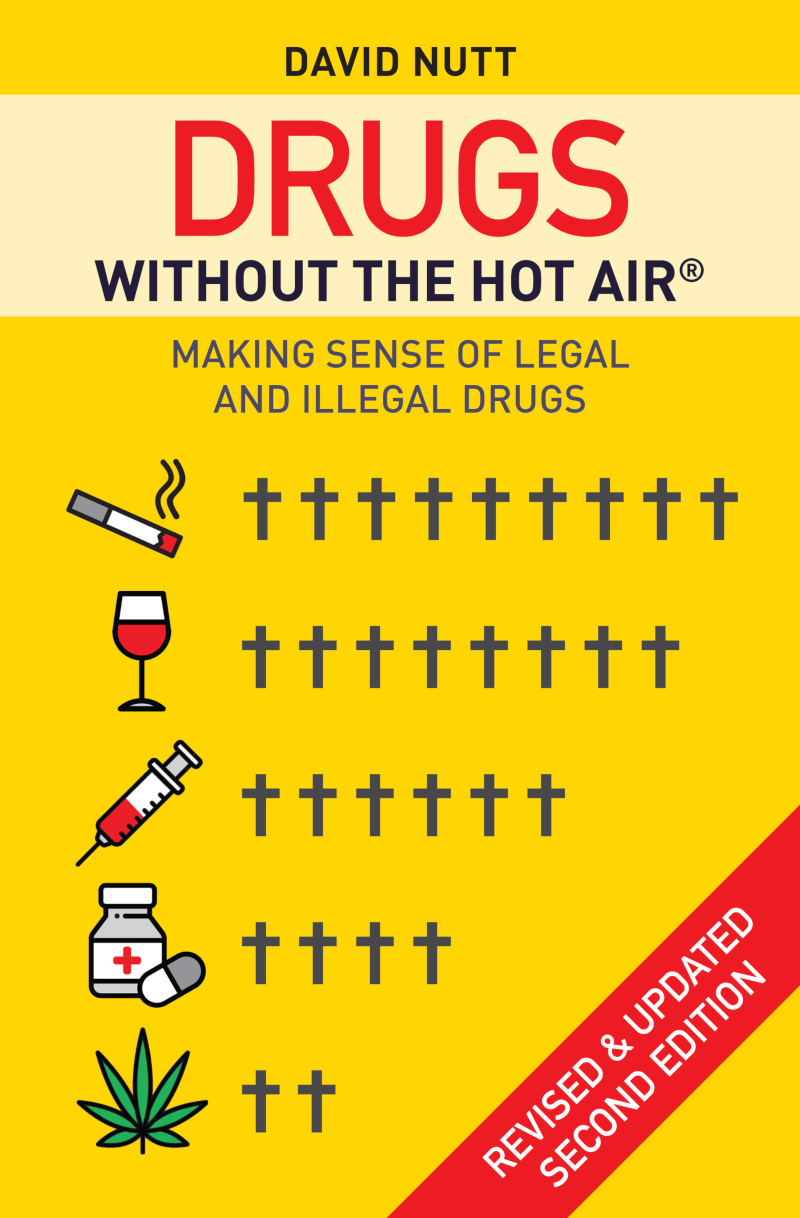 I was a scientific adviser to the UK government from 2000 to 2009. During this time, it became clear to me that drugs policy was being formed, not based on evidence, but on the political expediency of winning votes and pandering to the hysteria whipped up by a media more concerned with increased sales than decreased drug harms. When I was sacked, I wrote Drugs Without the Hot Air and used the proceeds to set up a charity, DrugScience.org.uk, dedicated to researching the truth about drugs. The book is set for its upcoming US release in a revised and updated second edition.The first research funded by DrugScience, published in The Lancet in 2010, quantified the overall harm of 20 drugs in the UK. The scores, which were derived from a powerful new technique called multi-criteria decision analysis, tabulated both the harms done to the users of these drugs and harms done to others. Alcohol topped this list with a score of 72, heroin scored 55, tobacco 26, cannabis in eighth place with 20, and LSD had a score of 7. Another European study in 2013 and Australian research published in 2019 showed strikingly similar patterns.

There is evidence in the scientific literature that psychedelics could be helpful in treating depression, alcoholism, and cluster headaches. Similarly, researchers have shown MDMA (ecstasy) to be useful in the treatment of PTSD and alcoholism. Ketamine, a version of which was just FDA approved, is another illegal recreational drug that has shown great promise in treating depression. Is it not utterly inhumane that legal restrictions drive sufferers to be criminals to get the treatment they need?

But perhaps the biggest loss to medical research has been the censorship of cannabis for more than 40 years in an attempt to curb recreational use. Cannabis has proven effective in the treatment of epilepsy and PTSD. Research on this commonly used drug has, thankfully, recommenced in the UK after stalling for more than 30 years. This reboot is most likely a result of widespread understanding of its low risk as compared with other drugs.

Despite the documented harm caused by some legal drugs and the evidence that some illegal drugs have therapeutic uses, governments—particularly in the UK—persist in accepting industry claims of the health benefits of alcohol, using this as an excuse not to intervene to reduce consumption and harm.

The perverse consequences of drug prohibition go back a century. When smoking opium was banned in the UK in the first part the last century, people took to injecting heroin. With alcohol prohibition in the US in the 1920s and 30s came a rise in the consumption of hooch and methanol. This dangerous trend continues, as labs around the world make new synthetic cannabinoid drugs faster than governments can ban them.

This came to a head in 1971 with the UK’s Misuse of Drugs Act and its arbitrary classification of banned drugs: Class A including heroine, crack, cocaine, methamphetamine, and a variety of psychedelics; Class B with cannabis, ketamine, and others; and Class C with anabolic steroids, some sleeping tablets, and a variety of tranquilizers. This legislation has often led to users substituting more harmful substances for the banned ones. Testing for cannabis in prisoners has led to this drug being substituted by potentially dangerous synthetics, such as spice, which were till recently legal, while heroin addicts have sought out prescription fentanyls, which can be lethal in shockingly tiny doses. Worse, because cannabis persists in the body for longer than heroin and attracts the same punishments for use, prisoners now routinely substitute heroin for cannabis.

The sale of nitrous oxide in the UK for recreational purposes was banned in 2016, largely as a result of some in the media using the term “hippy crack” to describe it, equating it with the most harmful form of cocaine. Used by clinicians for 200 years with virtually no deaths attributed to it, and administered to millions of women during childbirth, nitrous oxide is now demonized by the press, and legislators are swayed by the social zeitgeist instead of looking at scientific evidence.

Scientific research on “illegal” drugs is often hampered by draconian legislation. The 1971 UN Psychotropics Convention effectively destroyed research into psychedelics such as LSD and psilocybin (the active ingredient in “magic” mushrooms). No government would allow research on either the benefits or harms of such drugs, let alone fund it. Whereas scientists published about 240 studies on psychedelics alone in 1971, such manuscripts have virtually disappeared from the scientific literature over the past 30 years, though more recently this area of research has reawakened as a few intrepid researchers have pushed back against these bans.

Countries that have relaxed entrenched drug prohibitions boast many positive results of such policy changes. In Portugal, possession of drugs was decriminalized in 2005, users were treated with humanity, and those who had become addicted to drugs such as heroin or stimulants were offered medical help. In the 15 years of this policy, deaths from opioids have fallen by two thirds, whereas in the UK they have risen by 50 percent in the same period.

In California, which legalized medical marijuana in 1996 and recreational use of the drug in 2016, billboards everywhere state that if every other state decriminalized cannabis, their health-care costs would drop as much as California’s have.

Governments that have rethought access to currently legal but harmful substances have also seen the health of its citizens improve. Sweden’s state control on the sale of strong alcohol (more than 3.5 percent) has reduced average alcohol consumption to about two-thirds that of a US or UK citizen. Sweden has significantly lower levels of alcohol-induced harms, such as liver cirrhosis and hypertension, compared to most other Western countries.

In addition to rethinking existing drug policies, governments need to rethink their approach to new substances. Rather than ban new substances before information could be gathered on whether stricter controls were required, New Zealand added a “new substances” category to their drug laws in 2004, with quality-controlled sales of bzp (benzylpiperazine and related mild stimulants) at limited doses and health education messages on the packaging.

We’ll never prevent people using drugs, but with the right policies, we can reduce the harms drugs inflict on users and nonusers alike. Governments need to look at the scientific evidence in order to control the harms that drugs do, rather than simply trying to prevent their use. They need to regard drugs of all types in terms of health and welfare, instead of seeing them strictly as a law-and-order issue.