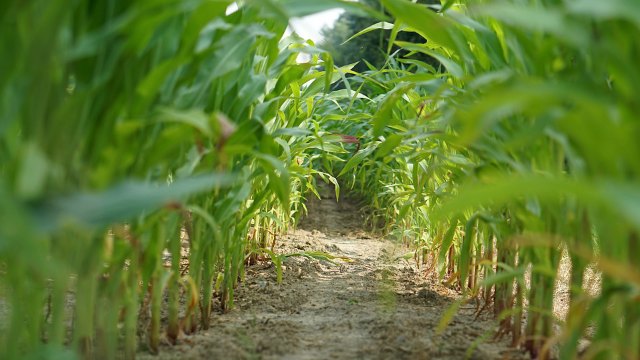 PIXABAY, KIRAHOFFMANNIn the search for ways to diminish human impact on the earth by reducing emissions and promoting sustainable resources, researchers and engineers have introduced alternative energy sources such as biofuels, or fuel created from plant matter. The demand for biofuel from corn competes with the supply of corn for food. This requires us to assess the energy efficiency and actual environmental impacts of using corn for biofuel as compared to feed or other secondary food sources such as cornstarch or corn meal.

In our recent study in Earth’s Future, we use a life cycle assessment method to account for all processes in the production of corn feed and corn-based ethanol. This method computes the energy from all processes first, and then finds the associated environmental impacts. Using a life cycle assessment to compare the energy efficiency of biofuel production is not new. However, our environmental assessment...

We are part of a greater network of scientists studying the Critical Zone, the permeable layer of the earth’s surface from the top of the tree canopy to the bottom of the groundwater table, in which most terrestrial organisms interact with the Earth. We quantify Critical Zone services, that is, the value of functions that support and sustain life. Critical Zone services pertaining to specific products or processes are measured by the affected changes in the Critical Zone’s ability to perform such functions. We account for costs and benefits for energy used and the environmental impact both upstream and downstream of agriculture production. This includes fertilizer, herbicide and insecticide production, machinery, labor, and direct energy used on the field. It also includes nitrate leaching, carbon storage in the soil, and carbon dioxide and nitrous oxide escaping into the atmosphere.

The services relevant to ethanol and corn feed production are atmospheric stabilization that considers related greenhouse gas emission, water quality—particularly, nitrate leaching out of the soil—and primary productivity, in our case, corn. Each of these categories was quantified monetarily.

We incorporated models to track the flow of carbon and nitrogen throughout the soil system of a cornfield. The change in services (a.k.a. environmental impacts) due to the flow of nutrients in the soil consisted of almost 80 percent of the total amount for the production system. This means that the soil is an extremely important factor of environmental impacts of both agriculture and biofuel. Critical Zone services include both emissions to the atmosphere and impact on the landscape and water bodies.

After harvest, the corn can either be sold for consumption or for conversion into ethanol. At this point the corn has a value, taken as the price of the corn. This value, representing the society’s current value of the crop based on consumers’ willingness to pay, more than makes up for the costs of emissions and water quality impacts during the agricultural phase, we find. However, once the corn is converted into ethanol, this value is lost and additional emissions associated with ethanol production in the refinery are added. After the grain has been converted into ethanol, the new value of the product is taken as the fossil fuel emissions avoided by using ethanol instead of conventional gasoline. This value does not make up for the total cost of emissions and water quality impacts associated with the ethanol’s entire production cycle.

Our research presents values of the net benefits for the U.S. as, on average, $1,492 and -$10 per hectare of corn used for feed and energy, respectively. These values do not include the soil fluxes, which make up almost 80 percent of the total environmental cost from production. Alternatively, the benefits of a hectare of corn production turn out to be $1,098 and -$942 for corn feed and ethanol, respectively, when we include the soil nutrient fluxes modeled through the soil system and provide a more-accurate account of the environmental impacts due to the agricultural phase of production.

For this research, when we are talking about costs, we are referring to the estimated costs of environmental benefits or impacts rather than physical production costs. We find that the net benefits derived from producing corn for food are much larger than producing corn for biofuel. This is because the perceived benefit we derive from corn for food is greater than that for biofuel, meaning that the cost we are willing to pay for corn for food is much larger than the estimated cost of emissions from conventional gasoline, which are avoided when biofuel is used for transportation.

This study does not advocate for one use of corn over another. Rather, it provides information of the net energy and services derived from each intended use. Based on our findings, we aim for scientists and the public to be more aware of the role of soil when conducting environmental studies and for the public to understand that what seems “greener” may not always be the case.

Meredith Richardson is a PhD student and Praveen Kumar a professor in the Department of Civil and Environmental Engineering at the University of Illinois, Urbana-Champaign. The study was funded by the National Science Foundation.