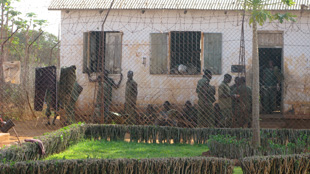 Convicted prisoners outside a cell at Mumbwa Prison. Inmates at prisons with associated farm facilities, like Mumbwa, often work in the fields 7 days a week, where they are frequently beaten and have no toilet facilities or water. © 2009 KATHERINE TODRYS/HUMAN RIGHTS WATCH

It’s not a surprise to anyone who knows anything about African prisons to hear that HIV and tuberculosis (TB) rates are staggering, and that health care is virtually nonexistent. Less intuitive is the assertion that I outlined in a recent article that governments and health donors should fund criminal justice reforms as critical HIV and TB interventions.

Disease in African prisons is incubated and spread through a perfect storm of inadequate funding, lack of political will, and a desperate need for policy change. In many African countries, prison conditions are awful, and have been for years. Prisons are often miserably overcrowded. The lack of prompt isolation...

Increased funding for health services is one important response. African governments need to meet the basic health needs of prisoners as a part of their obligation to respect and fulfill the right to health. Prisoners denied health care cannot turn elsewhere: they are wholly dependent upon prison officials to provide them access to care. While prison health care in Africa is desperately under-resourced, in some countries, like Zambia, international donors and the Prisons Service have recently taken some steps to expand care, notably TB screening. But donor interest and government funding is the exception rather than the rule, and it is unlikely that African prisons will ever be showered with enough funding to provide adequate care.

Prisoners in Africa, like those everywhere, are an unpopular cause, and as a group they have little political influence. Unlike other groups at risk of HIV and TB, including youth, women, and even sex workers and drug users, whose representatives are included in international conferences and policy meetings, the interests of prisoners are rarely recognized, let alone allowed to participate and give testimony of their experiences.

More fundamentally, though, is the fact that expanding funding cannot alone solve the barriers to HIV and TB prevention and treatment. Improving health conditions in prisons requires more than just investment in medical facilities. Tackling head-on the structural barriers to HIV prevention and TB transmission can also be more cost-effective. Justice reform is particularly critical. Prisons throughout sub-Saharan Africa are often so overcrowded that inmates may be forced to sleep seated, standing, or in shifts. One reason for overcrowding is extended pretrial detention. In Zambia and Uganda, few prisoners are brought before a judge soon after they are arrested. Even when they are, they wait years in prison pending trial. In both countries, prisoners can wait 9 or 10 years for their trial, and many plead guilty to minor charges with the hope that the sentence is shorter than they would have waited for a trial. Appeals can take even longer, and even when sentences are finished, bureaucratic delays may keep people in prison. We documented the case of a juvenile prisoner in Zambia who had been ordered released by a judge a year and a half earlier, but had yet to be let go.

In some cases, detention can be due to mere association with an offender or may even be entirely arbitrary. In Zambia, for example, the police and the Drug Enforcement Commission have been known to lock up whole families when their primary targets cannot be found. In Uganda, news reports have described wide-ranging police arrests in Kampala slums of people who are then used by prison authorities as free manpower for prison farms or contracted out to private landowners, who pay the jail for the services.

Each time people are arbitrarily imprisoned, held for long periods in pre-trial detention, or denied bail, their risk of becoming infected with HIV and TB increases. They may be cleared of the charges against them, but they will nonetheless be sentenced to infection. If the pre-trial detention is long enough, and their pleas for medical attention are denied, they may even die. In Uganda in 2010, HIV and TB accounted for almost 80 percent of prison deaths. Zambian lawyers told us that prison officers carried bodies out in the night, so there wouldn’t be panic when the prisoners saw how many had died.

Expanding resources for HIV and TB prevention and treatment are critical, but interventions—such as reforming bail guidelines, expanding the availability of community service and parole programs, increasing the number of judges, and improving access to legal representation—are critical to a sustainable, cost-effective approach to improving prisoner health. It is not rocket science: keeping people who aren’t dangerous out of prison will reduce overcrowding and make adequate provision of health care in prisons more affordable. In addition to protecting health, these changes would advance human rights and justice.

Prisons are not a separate world. Every day prisoners are released back to their families and into our communities. Prison officers also form a bridge between prisons and communities. Protecting prisoners’ health is an important part of protecting public health. It is also a way of recognizing that prisoners, even if they have committed a crime, are still human, and are entitled to human dignity and rights.