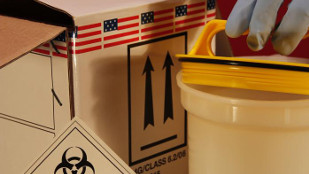 CDC, DEBORA CARTAGENARecent news recounting the lapses and failures of high-profile laboratory programs serve to highlight the critical role that biorisk management plays in ensuring public health and safety. First, it was uncovered that several time-forgotten vials of freeze-dried smallpox virus were discovered in an aging storage facility on the campus of the National Institutes of Health (NIH) in Bethesda, Maryland. Shortly thereafter, it was revealed that a relatively benign strain of “bird flu” was cross-contaminated with the dangerous H5N1 strain at the Centers for Disease Control and Prevention (CDC). In a separate incident reported by the CDC, several dozen lab workers were potentially exposed to anthrax. In response to these events, CDC Director Thomas Frieden announced that the agency’s avian influenza and anthrax laboratories would cease activity until safety and security issues were reconciled.

The recent news of these failures in security at two of...

What lessons can we learn from these recent incidents at the CDC and NIH? The good news is that no human exposure to smallpox has been reported. The bad news is that all three incidents put the public at risk. It is the central dogma of biosecurity to always know where, in what form, and in what quantity potentially hazardous agents are stored. The primary lesson learned in all these cases is the importance of robust biosafety and biosecurity management programs in protecting lab workers and researchers, animal populations, and the public from serious harm.

To address these issues, the Energy and Commerce Subcommittee on Oversight and Investigations held a hearing, the outcome of which was increased scrutiny on laboratories working with high-risk pathogens, such as Biosafety Level 3 (BSL3) and BSL4 facilities. At this time, there is no clear indication that this increased level of scrutiny will stop at federal labs. Private institutions that receive federal research funding and oversee these laboratories, many of which are regulated through the National Select Agent Registry, are the likely next targets of inspection. Right now, all laboratories should be asking themselves how and when this additional scrutiny will affect their programs. There are no “ifs.”

In addition to likely regulatory and process changes, the exposure of headline risk poses a public relations challenge. If the nation’s federal labs are in questionable shape, the public will immediately to question the safety of the laboratories in their neighboring universities and research institutions, asking the very real question, “How safe are they?” Institutional biosafety officers, directors of environmental health and safety programs, and heads of research programs should capitalize on this increased attention.  Inventory management, exposure control, incident response, emergency response, occupational health, medical surveillance, and universal precaution policies should be dusted off, reworked, and re-energized. These are the fundamentals of biorisk management, and the tried and true method for creating public safety and public trust.

In summary, the increased scrutiny that will result from the latest biosecurity failings can be good news for health and safety programs, as it will serve to drive risk mitigation across the country. While we can all agree that scrutiny is not an ideal form of attention, it is attention nonetheless, and any attention is good for the long-term health of biorisk management programs. The safer they are, the safer we all are.

Ryan Burnette is the vice president of WCG Biosafety, a division of the WIRB-Copernicus Group, and author of Biosecurity: Understanding, Assessing and Preventing the Threat. Jonathan Richmond is an expert consultant to WCG Biosafety. He is the former director of the CDC Office of Safety, Health and Environment and former chief of the Safety Operations Section for the NIH’s Division of Occupational Health and Safety.