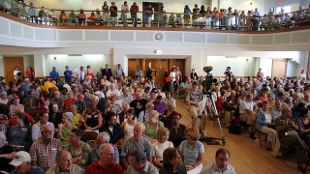 Public meetings and consensus conferences seem to be the tool du jour for many government agencies, including the National Institutes of Health and the US Department of Agriculture. Designed to give the public a voice in policy decisions, they can, in some cases, provide valuable insights into the local public’s views and opinions on certain issues. But they can also have disastrous consequences when used as a policy-making tool designed to tap public opinion more broadly.  And the likelihood of failure is particularly high when debates emerge in a community about if and where to build controversial facilities for storing nuclear waste or conducting research on potentially deadly biological pathogens.

The politics of site selection for controversial research often pits the collective need for state-of-the-art...

In fact, our recent study of the political dynamics surrounding the recent site selection process for the Department of Homeland Security’s (DHS) National Bio- and Agro-Defense Facility (NBAF) suggested that using public meetings may actually promote policy choices that are diametrically opposed to public preferences.

One of our most important findings concerned the final ranking of the six proposed NBAF sites, particularly with respect to the ill-defined criterion of “community acceptance.”  In particular, we compared the DHS rankings to population surveys in the six finalist communities and in-depth interviews with journalists, policy makers, and community leaders. These data showed that assessments of “community acceptance” by the DHS underestimated actual public approval, likely dominated by vocal opposition groups.

The DHS’s rankings were also influenced by differences in individual opinions and perceptions of what everyone else thought.  In communities ranked as “not fulfilling” or only “partially fulfilling” the DHS’s community acceptance requirements, the share of supportive residents was substantial, but citizens mistakenly saw the climate of opinion as overwhelmingly negative, influenced in part by contentious public meetings and the resulting news coverage. In Georgia, for instance, we witnessed a complete reversal between the distributions of respondents’ own views (mostly supportive) and their perceptions of others’ views (mostly in opposition). Similarly, though residents of North Carolina and near Plum Island in New York expressed more equivocal support, the majority was nevertheless perceived as extremely hostile toward the facility.  Only residents near the Kansas, Mississippi, and Texas sites, which the DHS ranked as being in “complete fulfillment” of the community acceptance criterion, both expressed support for the facility and perceived support among their fellow citizens.

Public opinion theory suggests that both the DHS rankings of community acceptance and survey respondents’ views of the climate of opinion were based on skewed perceptions shaped by highly vocal anti-NBAF groups and individuals. Opposition views, initially expressed in public meetings as well as yard signs and everyday conversations, were then amplified by news media and spread within communities and to the DHS. This resulted in a dual climate of opinion, which occurs when the majority of the public is on one side of an issue but also believes that most of the people around them oppose that view. Dual climates of opinion can have detrimental effects on public discourses surrounding science and technology by silencing large segments of the public who falsely see themselves in the minority. They are even more of a problem when they serve as a heuristic for policymakers who are looking to these meetings for public input, because that input ultimately reflects the views of a highly self-selecting group of people that in many cases misrepresents the views of the community.

In these cases, public meetings were not the answer. But, if not through public meetings, how can policymakers achieve a consent-based approach while conforming to democratic ideals, particularly for controversial scientific issues? Our recommendation would be to focus more time and resources on pro-active, systematic assessments of public opinion that gives an equal voice to all members of the community. Decisions like this with tremendous societal and political impacts should not be left only to those with strong views who are willing to make the most noise at a public meeting.

Read more about the NBAF project and other related research in Risk Analysis, Communication Research, and this Harvard University research paper series.