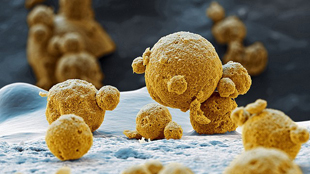 Some forms of biotechnology have become notoriously controversial. Genetic modification of crops, for example, altered the food supply in ways some consumers found troublesome, either because of anticipated consequences, a lack of tangible benefit, lack of opportunity to participate in the decision-making, or simply a sense of inherent “unnaturalness.” Stem cell research has raised similar uneasiness, albeit for entirely different reasons, largely moral beliefs that equate it with the destruction of human embryos. So far, though, public perception of nanotechnology does not seem to be headed in the same direction. Sure, there are appeals for regulation and isolated protests, but it doesn’t seem as though there is really as much in the way of concerted will behind them. While some might be waiting for the other shoe to drop—I’ve been told many times that public concerns about nano are bound...

Despite emerging evidence of potential toxicity to human health and the environment from some forms of nanotechnology under some circumstances, not much popular alarm has arisen. Great uncertainty remains over which products and under what circumstances we should be concerned, but of course this hasn’t stopped public reaction in the past. Several potential “triggering events” of the sort we social scientists might have expected would unleash underlying fears have already happened. In 2006, reports emerged of serious respiratory problems among German consumers using a household cleaning product called “Magic Nano,” and evidence published in 2009 indicated severe lung disease and even deaths among a small group of Chinese factory workers exposed to nanoparticles (and many other chemicals, as it turns out). In both cases, the link between nanotechnology and disease is far from clear. “Magic Nano” may not even have contained nanoparticles; the label was apparently chosen in an attempt to hype the product, much like the name “iPod nano.” Clearly, the marketers involved believed the word “nano” is attractive to consumers, rather than a source of concern for them.

To me, as a social scientist who studies risk communication, perception and reality are indeed the same thing, and so the interesting question is why, when uncertainty about risks has certainly not stopped public opinion from turning sour in the past, should nano be getting the benefit of the doubt while so much of bio remains persistently controversial?

The answer may lie in the nature of our technoscientific culture. I recently published a multi-year panel study involving 76 citizens of South Carolina, representing various walks of life, which reinforced the notion that because most Americans like technology, they are generally willing to give nanotechnology a pass, at least for now, even though they don’t know much about it. About two-thirds of the panel held positive views, and the negative minority seemed to draw on negative expectations about technology more generally, rather than specific views about nanotechnology. Panelists’ views changed little over the 32 months of the study. The most common concerns, reasonably enough, centered on unexpected consequences and unanticipated side effects. Indeed, people seemed perfectly aware of the uncertainties surrounding nano-associated risks, but this hardly appeared to induce fear.

To those of us who lived through the early years of the genetically modified (GM) food “wars,” which some tended to attribute to a lack of familiarity alongside low levels of trust, this is pretty interesting. Nano involves many of the same sorts of key actors (major corporations, government regulators, scientists, engineers, and consumer advocacy groups) and, if anything, even greater levels of scientific uncertainty. Yet there’s something quite different about what we call the “climate of public opinion” for nanotechnology as opposed to biotechnology, particularly GM. To be sure, some observers are invoking the so-called precautionary principle (the largely European idea that we should not adopt a technology until the evidence shows it does not cause harm), but even in such cases it usually seems that they are calling for precaution because they think this is generally the right way to manage any new technology, rather than because nanotechnology is particularly worrisome.

So what makes nano so different from bio? Simply put, manipulating DNA simply seems to challenge our underlying cultural ideas about how the world ought to be in ways that manipulating otherwise ordinary materials does not.

For those who want to communicate about risk in a responsible way with the so-called “lay” or non-specialist public, nano represents a novel challenge. Rather than being an “amplified” risk, by which I mean one that the media and other social institutions have tended to highlight, nanotechnology may represent an “attenuated” risk, or one that these institutions have tended to ignore. If people are too fearful of a technology, they may lose out on its potential benefits, yet if too trusting, they may ignore important risks. But few among us really want to be the one yelling “Fire!” in a crowded world. After all, we’re still not even sure there’s a problem. Are we?

Susanna Priest (susannapriest@yahoo.com) is the author of Nanotechnology and the Public: Risk Perception and Risk Communication (Taylor and Francis, 2012), as well as a November 2011 article in Risk Analysis (Volume 31, Issue 11, pp. 1718-1733) on “Envisioning Emerging Technologies,” which reports on the panel study results as part of a special issue. She also edits the academic journal Science Communication.