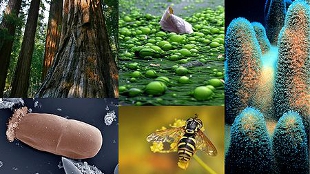 Collodictyon is not a virus, but it has gone viral. This obscure unicellular species, isolated from a lake in Norway, is fast becoming this year’s most talked about microbe. A cursory Google search of its name, pronounced co-low-dic-tee-on, gives dozens of hits from major international newspapers, magazines, and online media, many with flashy headlines like: “Oldest Human Ancestor Found in Lake Sludge,” “Man’s Remotest Relative,” “World’s Oldest Living Organism,” or as The Scientist put it, “A New Branch of Life?”

So what is this mysterious single-celled creature? Contrary to what is being reported, Collodictyon is not our remotest relative or the world’s oldest living organism. But it is an interesting species, and one that merits attention.

First described from samples collected in India 150 years ago, Collodictyon is a heart-shaped, flagellated amoeba that lives in freshwater, where it gobbles down algae, and sometimes...

Collodictyon is a eukaryote, which means it has membrane-bound organelles, including a nucleus. But unlike other eukaryotes, it has a combination of morphological features that together make it unique among all eukaryotic species described to date. It has four long flagella, protruding from a wall-less unadorned cell; a highly vacuolated cytoplasm; bizarre tubular-shaped mitochondrial membrane folds; and a deep ventral feeding groove—the base of which forms temporary cellular projections, called pseudopods, that are used for capturing prey. This type cellular organization is thought to reflect that of ancient eukaryotes, but a lack of genetic data from Collodictyon has prevented researchers from fully exploring this hypothesis.

Recently, a group of scientists from Norway and Canada analyzed the DNA of a Norwegian isolate of Collodictyon, hoping to reveal its genetic origins. Their findings, which are published in Molecular Biology and Evolution, confirm what many have suspected: Collodictyon is an evolutionary loner. Collodictyon’s genes have very different DNA sequences than the corresponding genes from other eukaryotic species, implying that the species represents a new branch on the tree of life—one that is not clearly associated with any other known eukaryotic lineage. What’s more, this new branch originated early in eukaryotic evolution, and is arguably one of the deepest branches on the trunk of the eukaryotic tree.

Because Collodictyon belongs to such a deep-branching lineage, it probably has some features that resemble those of the earliest eukaryotic species, which existed more than 2 billion years ago. But resembling an ancient eukaryote is different than actually being one. Moreover, Collodictyon is not our most remote relative. For instance, humans share a common ancestor with Collodictyon more recently than they do with the bacterium Chlamydia. It is not even or our remotest eukaryotic relative: based on the current understanding of the eukaryotic tree, the evolutionary distance between humans and Collodictyon is no greater than that between humans and, for example, land plants, such as Soya.

Although its significance has been misconstrued in the news, Collodictyon is sure to help scientists understand early eukaryotic evolution. It may also become a key player in resolving the tree of life—when using molecular data to reconstruct evolutionary relationships, it is crucial to include in the analysis taxa from deep-branching lineages, like Collodictyon. And because Collodictyon shows no clear affiliation with any other eukaryotic lineage, it will be particularly useful for clarifying relationships among eukaryotic “supergroups,” such as Opisthokonta (e.g., animals and fungi) and Archaeplastida (e.g., land plants and green algae), which together contain much of the planet’s biodiversity. The hype will subside, but Collodictyon is in for a long and fruitful career as a research organism. I’m predicting that this little amoeba will prove to be more than a one-hit wonder.

David Smith is a postdoc in the Department of Botany at the University of British Columbia in Vancouver, BC, Canada. He can be reached at smithdr@dal.ca.