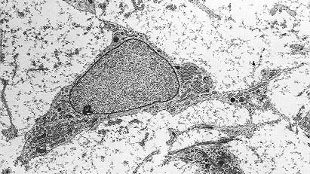 WIKIMEDIA; ROBERT M. HUNT, ANDREATELETRABAJOToday, academic and nonprofit institutions are embracing entrepreneurial endeavors with private industry in a big way. The straight line once dividing academia from the biopharma industry has all but disappeared, with universities now housing about one-third of the more than 1,200 so-called business or technology incubators in North America. But despite all the cross-fertilization occurring between academia and industry, the melding of these two philosophies has a ways to go, particularly when it comes to advancing stem cell therapies, one of the most promising, although yet  to be fully realized, new treatments.

Potential cell therapy products are being investigated and developed at an astonishing rate. Investigational New Drug (IND) and Investigational Device Exemption submissions to the FDA for cell-based therapies nearly doubled in the last five years—from 60 to around 100—and the expectation is that we will see more clinical trials related to these products....

The safety requirements for preclinical testing of biologics are similar to those set for drugs. The cellular therapies must demonstrate that they are reasonably safe to use in Phase 1 studies. The cell product must also be consistent and well-characterized, and the safety studies to determine toxicity and tumor-forming potential must be conducted with a biocompatible formulation utilizing the intended route of administration.

Contract research organizations (CROs)—such as my employer, Charles River Laboratories—are increasingly being utilized by biopharmaceutical companies for drug discovery, and are one way academic laboratories can supplement their in-house expertise in early-stage drug development. And funding agencies such as the California Institute for Regenerative Medicine, which currently supports more than 80 research projects, have been proactive in educating academic and industry researchers alike about the challenges of bringing a regenerative medicine product to market, including manufacturing scale-up and regulatory expectations.

As part of these regulatory requirements, the FDA in November finalized its cell therapy guidance for industry, which spells out the substance and scope of preclinical information needed to support clinical trials for investigational cellular therapies.

Without the right kinds of expertise, academic researchers run the risk of getting tripped up by the stiff requirements for new investigational drugs and seeing these discoveries flounder. Knowing where to find the right off-campus support is an important first step toward translating their basic discoveries into safe and meaningful clinical treatments.

Shawna Jackman is a senior research scientist in the Photobiology and Cellular Therapeutic Safety group at Charles River Laboratories, where her focus is the oversight and conduct of preclinical safety programs for cell-based therapies designed to meet regulatory expectations. Jackman is also a frequent contributor to Charles River’s science blog, Eureka.