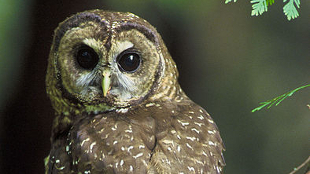 Management of the northern spotted owl is once again in the headlines.  The issue today is not whether to save the owl’s old-growth forests, but rather how to manage our forested landscapes in the face of scientific uncertainty concerning climate change, forest health, and wildfire.

The US Fish and Wildlife Service (Service) recently published the Proposed Revised Critical Habitat Rule for the northern spotted owl, for which we are currently seeking public comment and scientific peer review.  This proposed critical habitat is based on a three-part recovery strategy: (1) manage the competing invasive barred owl; (2) protect the remaining older forest habitat; and (3) maintain and restore healthy forest ecosystems.  This draft proposal, and the 2011 Revised Recovery Plan upon which it is based, represent a significant increase in protections for the spotted owl compared to previous critical...

Dominick DellaSala disagrees, and in his recent opinion in The Scientist states his position on forest health and fire risk in the Pacific Northwest as scientific consensus.  Of particular concern is his assertion that the Service is disregarding this “consensus” for political reasons.

The issue of ecosystem health and fire risk (severity, frequency, and scale) in the Pacific Northwest is complex, and there is a wide variety of legitimate scientific viewpoints on forest management in the face of uncertainty.  This uncertainty is exacerbated by the consequences of a century of fire suppression and the emerging influence of climate change and its impact on patterns of precipitation, insect outbreaks, and forest disease.  DellaSala states in his opinion essay that “the assumption that forest fires are getting worse in the dry provinces in the owl’s range has been rejected by scientific analysis,” citing his paper published in Conservation Biology in 2009.  In fact, 13 distinguished scientists published a rebuttal of this 2009 paper in Conservation Biology the following year.  These and many scientists dispute DellaSalla’s position, and it is disconcerting that he fails to acknowledge those dissenting opinions while simultaneously calling for scientific integrity.  There are many recently published studies that reach different conclusions, and most suggest large changes in fire frequency, severity, and total burned area are indeed underway in the Pacific Northwest.

DellaSala also misrepresents the scientific basis for the Service’s consideration of “active forest management” to address these forest health concerns.  The scientific debate of when best to apply the precautionary principle in forest management—when to take action vs. when to not take action in the face of risk—has been ongoing for several decades.  Ten years ago, eminent fire ecologist James Agee described these two viewpoints in an essay published in Conservation Biology in Practice in 2002, “The Fallacy of Passive Management,” and made a cogent scientific argument for targeting fuels and vegetation treatments toward broader ecosystem conservation goals.  DellaSala can disagree with this perspective, but he cannot disregard the wide and growing body of scientific research that recommends active management to varying degrees, some specific to the conservation of spotted owls and other wildlife species.

Furthermore, the Service’s plans do not advocate widespread forest thinning as the sole focus of owl conservation efforts, as DellaSala implied.  We emphasize conservation of existing spotted owl nest sites and high quality owl habitat.  Thinning, prescribed fire, let-burn policies, and other tools are part of the overall active management portfolio for land managers to address forest health.  Given the uncertainty in climate and fire risk predictions, we explicitly recommend restoring more natural fire regimes and forest patterns to maintain ecosystems that are resilient to fire and other disturbances.

DellaSala cites these and other recommendations as “political maneuverings...cloaked as ‘ecoforestry,’” thereby dismissing the recommendations of the many distinguished scientists practicing in the field of ecological forestry and from whom many of our recommendations derive.  We have solicited scientific peer review of the draft proposed critical habitat from over 40 recognized scientific experts in the fields of wildlife biology, fire ecology, forest ecology, and habitat modeling, and we will use this review to improve the final critical habitat designation.

But while we respectfully disagree with DellaSala’s viewpoint, we believe it is an important part of the scientific process for conclusions and assumptions to be challenged.  He raises some reasonable concerns that we take into consideration when developing our conservation strategies, but his conclusions do not represent the scientific majority on this issue.   We encourage your readers to visit our website to review the comprehensive scientific documentation upon which the recovery plan and critical habitat proposal are based and arrive at their own conclusions regarding whether it is a balanced and rigorous scientific treatment of this issue.