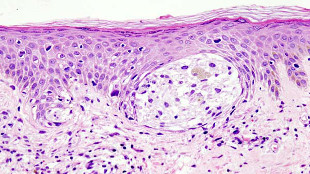 WIKIMEDIA, KGHCancer therapy has blossomed in the last decade with more than 185 US Food and Drug Administration (FDA)-approved drugs on the market, including multiple therapies targeting the immune system. The immune system is the body’s main defense against any malignancy, including cancer.  However, most cancers have developed ways to evade the immune system by suppressing or hiding from it. Recently, researchers have begun to devise ways to turn the immune system back “on” in cancer, known as cancer immunotherapy.

The latest FDA-approved cancer immunotherapies have included multiple immune checkpoint inhibitors. To prevent inappropriate destruction of the host, the human immune system is composed of multiple checks and balances called immune checkpoints. These checkpoints consist of pathways that, when triggered, will deactivate the attacking immune cell.

Unfortunately, many cancers have devised ways of manipulating this system.  One method is through the upregulation of immune checkpoint molecules, such as...

Unlike chemotherapy, which acts directly on the tumor, immunotherapy acts on the immune system, which then acts on the tumor. This takes time. And if the treatment isn’t effective, the administration of immunotherapy can result in wasted time—time during which a patient could have received another treatment. Thus, it would be advantageous if a predictive test—in particular, a speedy, noninvasive one—could be used to predict immunotherapy efficacy early in treatment.

To that end, my colleagues and I are working to develop such a test, based on patients’ personal T-cell receptor repertoires (TCRRs).

Every person has a unique TCRR, one that’s constantly changing in response to immune stimuli. For example, if a person gets the flu vaccine, the T-cell receptors responsible for recognizing flu antigens will become activated and those T cells will expand. The person now has a new TCRR, which consists of more flu-recognizing T-cell receptors. This is called clonal expansion.

In our lab and elsewhere, researchers have recently begun exploring changes in clonal expansion in response to cancer immunotherapy, especially those related to immune checkpoint inhibitors. The prevailing thought is: if blocking immune checkpoints leads to changes in a person’s immune system, T cells with unique receptors will be activated, resulting in increased clonal expansion.

In one recent study, investigators from the University of California, Los Angeles (UCLA), and their colleagues tested the effect of an anti-PD-1 on TCRRs in melanoma patients. To assess TCRR, the researchers isolated tumor samples before and after treatment, then sequenced the T-cell receptor gene. Because every T-cell receptor is made antigen-specific through genetic recombination, sequencing enabled the researchers to identify the unique clones and, therefore, each patient’s TCRR. They discovered that patients with clonal expansion showed a much greater response to anti-PD-1 treatment.

Separately, the UCLA team showed that treatment with another checkpoint inhibitor—a monoclonal antibody against CTLA4 (anti-CTLA4)—resulted in an increase in clonal expansion in melanoma patients’ peripheral blood mononuclear cells (PBMCs). PBMCs are isolated from blood, paving the way for noninvasive screens to analyze a patient’s TCRR.

Together, these studies have demonstrated that assessing patients’ TCRRs could eventually help researchers predict the efficacy of cancer immunotherapy treatments much earlier, allowing for the more effective use of these treatments in the fight against cancer.

Jacob Richards is postdoctoral fellow in the National Cancer Institute Center for Cancer Research’s Laboratory of Tumor Immunology and Biology.