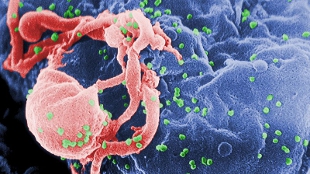 A week from today (May 18) marks HIV Vaccine Awareness Day, an occasion designed to salute individuals on the front lines of efforts to develop a preventative vaccine against HIV. The drive to eradicate global AIDS is facing unprecedented challenges, with a report in The New York Times last year describing it as a war we are losing due to financial and technical roadblocks.

Yet tremendous progress is being made towards the development of an effective vaccine. In autumn 2009, a collaborative effort between the Ministry of Health in Thailand, the US Military, and the US National Institute of Allergy and Infectious Disease (NIAID) announced the first encouraging results from an efficacy trial -- 31 percent prevention of infection in a 16,402 person community-based trial in Thailand. This result achieved significance (p = 0.04)...

This trial, the third efficacy trial to be conducted for candidate HIV/AIDS vaccines, was the first to test a product designed to elicit both antibodies and T cells. This vaccine used a recombinant canarypox vaccine to prime immune responses plus protein subunits of the HIV surface protein (termed gp120) to boost immune responses.

Further analysis of the data suggested that protection (prevention of infection) had peaked at 60 percent at 6 months following the fourth and final vaccination, waned to 44 percent 12 months later and to 34 percent by 2 years following the final vaccination (AIDS Vaccine 2010, Atlanta GA, September 28-October 1, 2010) -- declines associated with decreasing levels of the antibody responses over time. Thus, this vaccine, if regularly boosted to maintain antibody responses, might have the potential to achieve 60 percent prevention from infection -- a credible level of protection for a new vaccine.

Until the Thai trial, many considered the best achievable outcome for an HIV/AIDS vaccine would be to induce immune responses capable of controlling, but not preventing, infection. The data from the Thai trial suggested that prevention from infection is a possibility. Since the Thai trial, complete prevention from infection has been achieved in non-human primate models when repeated rectal or vaginal virus challenges are used to mimic sexual transmission. The repeated-dose challenges are typically administered weekly for 6 to 12 weeks using a dose of virus that infects 30 to 50 percent of unvaccinated animals at each challenge event. This dose is much greater than the amount of HIV in a typical human exposure. Thus there is hope that the results in the non-human primate models will translate into vaccine-induced prevention in humans.

At Geovax Labs Inc., we are working on a combination vaccine in which the first component is a DNA vaccine co-expressing granulocyte-macrophage-colony stimulating factor (GM-CSF) and HIV virus-like particles that prime the immune response and the second component is an attenuated vaccinia virus (MVA) also engineered to express HIV virus-like particles to boost that response. Using prototype vaccines in monkey models, we have been able to demonstrate that this combination is capable of achieving a highly encouraging 70 percent prevention from infection (L. Lai, et al., Jour Inf Dis, in press).

When we measured how tightly the vaccine-elicited antibodies bound to the envelope protein of the challenge virus (a measure called the avidity), we found that it correlated with prevention of infection. We are highly encouraged by these results and, in collaboration with the NIAID, are advancing the GM-CSF concept into human clinical trials.

Several other companies are also working toward an AIDS vaccine. Aventis-Pasteur and Global Solutions for Infectious Diseases, which provided the vaccine for the successful Thai trial, are preparing product to test the ability of their vaccine, given with regular boosts, to protect Thai men who have sex with men. Other efforts include those of GlaxoSmithKline, which is testing adjuvants with proteins; the Netherlands-based biopharmaceutical company Crucell, working with Harvard University to develop new adenovirus vector-based vaccines; Pennsylvania-based Inovio, which is developing a vaccine that contains viral DNA plus a cytokine; Maryland-based Profectus, which is developing DNA, protein and vesicular stomatitis virus-vectored vaccines; and Novartis, which is working on adjuvanted protein vaccines as well as viral vectors. The European company Mymetics is developing virosomes displaying gp41 derived proteins as a mucosal vaccine. Aventis-Pasteur, in tandem with Eurovac, a European vaccine consortium, is working on developing additional live poxviral vectors to be used with protein boosts from Novartis.

In short, as we reflect on the past progress that has been made to develop an HIV/AIDS vaccine and look to the future advancements of these efforts, we have cause for optimism. The AIDS vaccine field has generated evidence for the ability of vaccines to prevent HIV infection in humans, and there is hope that the low levels of prevention achieved thus far can be enhanced by regular boosting. The field has also developed new non-human primate models for testing vaccines, enabling researchers to clearly distinguish the ability of prototype simian vaccines to prevent infection. I am confident vaccines will conquer the AIDS pandemic. Tremendous progress has been, and is continuing to be made.

Harriet L. Robinson, PhD, is Chief Scientific Officer at GeoVax Labs and is the developer of the company's HIV-1 AIDS vaccine technology. She can be reached at hrobinson@geovax.com.