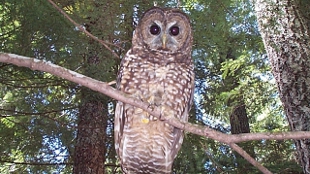 No other species symbolizes the “war-in-the woods” over logging vs. forest protections better than the northern spotted owl. The owl was listed under the Endangered Species Act (ESA) in 1990 due to destruction of its forest habitat by logging. Unchecked logging at the time, as well as ongoing mechanization of mills that accelerated the speed at which trees could be processed by fewer workers, would have soon eliminated nearly all older forests along with forestry jobs. Historic logging levels also would have severely impacted the owl population, possibly eliminating it altogether, throughout most of its range.

Luckily, restrictions on timber harvest were put in place via the 1994 Northwest Forest Plan, which emphasized conservation and reduced timber harvests on more than 10 million hectares of federal lands. I and other scientists have hailed the forest plan as a global conservation model that protects terrestrial...

But it is not time to relax. The owl’s legacy is fraught with efforts to overturn habitat protections at the highest levels of government. In 2006, I experienced this first hand while serving on the US Fish & Wildlife Service’s (Service) second owl recovery team where we were instructed by high-ranking officials of the George W. Bush administration to de-emphasize habitat protections. In 2007, I and other scientists testified in Congress on widespread-political interference in the ESA, which led to an investigation by the Inspector General into allegations that were corroborated in 2008. When President Barack Obama took office, one of his first natural resource decisions was to remand the owl recovery plan and related critical habitat determination requiring that revised plans be based on best-available science and instantly restoring credibility to the Service.

Despite several informed studies, however, the Service’s revised owl habitat plans have gone against scientific recommendations. Recently, for example, the agency proposed controversial active forest management (chainsaws) to be used in dry forests under the pretense that fires are getting worse and the benefits of thinning forest vegetation to reduce fire risks outweigh impacts to the owl. This recommendation was partly due to pressure from the timber industry and congressional allies, which continue to deny the importance of protecting habitat for spotted owls. But contrary to the assumptions of this plan, forest fires are not an increasing threat to spotted owls. In fact, spotted owls persist in fire-adapted forests and show resilience when forests burn. In the southern part of the owls’ range, fires have historically shaped owl habitat and behavior. Studies document owls nesting in burnt old forests and foraging in burnt shrubby areas. Nesting territories, however, are abandoned immediately if post-fire logging occurs, and thus protecting burned and nearby unburned habitat is critical to post-fire recovery.

The assumption that forest fires are getting worse in the dry provinces in the owls’ range has also been rejected by scientific analysis. Using data on severe forest fires over a 4-decade period (1980s-current), ecologists (including me) mapped wildfires to determine whether they were indeed increasing over time. In a paper published in Conservation Biology in 2009, we rejected the hypothesis of increasing fire severity and showed that the rate of natural regrowth of old forests was outpacing fire-related habitat changes by a wide margin. Simply put, the spotted owl has evolved and thrived with fire in the landscape, and fires are not getting worse in this region. So reducing the threat of forest fires by wide-spread thinning of owl habitat should not be the focus of conservation efforts.

The Service also proposed experimental and limited removal (shotguns) of barred owls, a competing invasive species, along with an accompanying Environmental Impact Statement that examines a range of alternatives before potentially scaling up the program. In this case, the Service responsibly chose to put sound science in the driver seat by experimenting with the efficacy of small-scale removals before implementing this untested program over a larger region. But we must be careful not to put too much of the blame on barred owls. A recent study documented that spotted owl extinctions from barred owl invasion were greatest in spotted owl territories with lower amounts of old growth at the nest site, suggesting that protecting habitat is essential for reducing competition between owl species. This finding again refutes timber industry assertions that habitat is not a limiting factor, instead supporting recommendations made by The Wildlife Society, Society of Conservation Biology, and American Ornithologists’ Union to protect more old forest habitat to reduce competition among owl species.

The ongoing battle between scientific integrity and political expediency continues. It appears decisions on spotted owls will be dominated by political maneuverings and election-year politics cloaked as “new recovery” and “ecoforestry.” There remain legitimate disagreements in scientific circles on owl management, but the spotted owl was initially listed because of rampant logging of old forests; thus the precautionary principle should apply:  look before you log.   And while there have been improvements in the use of science in ESA decisions since Interior Secretary Ken Salazar issued a 2009 scientific integrity order establishing a policy to ensure the integrity of science in the government’s decision-making, the Administration has yet to reach the best available science standard with respect to the owl.

Dominick A. DellaSala is the president and chief scientist of Geos Institute and president of the Society for Conservation Biology North America Section. He received conservation leadership awards from the World Wildlife Fund and Wilbuforce Foundation for his work on roadless areas and national monuments and “outstanding academic excellence” recognition from Choice Magazine for his book on temperate and boreal rainforests of the world.