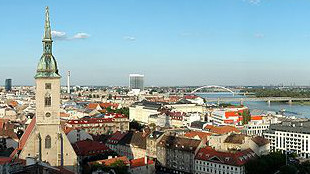 Bratislava, SlovakiaWIKIMEDIA, STANO NOVAKAfter the fall of the Iron Curtain, optimism about the future spread across former Eastern-block countries like Slovakia. When it came to science, the cause for confidence seemed clear—eliminating ideological constraints from academia allowed scientists to freely collaborate with their foreign colleagues, to study and work in the best laboratories abroad, and to compete for research funding. Talented young scientists had every expectation of flourishing.

But after 20 years of transformation, how do Slovak scientists fare when compared to their international colleagues? The polite answer is: not very well. By any measure, Slovakia ranks far behind comparable European countries. For example, based on the number of citations per publication, Slovakia falls behind Albania and Mauritius, in 175th place (as of December 2013). Furthermore, the current number of European Research Council grants awarded to Slovak scientists is one.

So what went wrong? The problem is...

In fact, this hypothesis has been tested over the last few years. In 2007, Slovakia implemented the Operational Programme Research and Development for Innovations with a budget of more than €1.2 billion provided through European Commission (EC) funds. The strategy behind allocating this large sum of money seemed obvious: support those who perform high-quality science and thus catalyze formation of so-called “centers of excellence” for cutting-edge research.

But among Slovakia’s 45 research centers of excellence—for the sake of comparison, that’s 30 percent more than there are in the much-larger Germany—there was essentially no increase in scientist productivity that could be correlated with the investment. In fact, the number of citable publications in the biomedical sciences started to decrease just after 2007, the year that the EC money flowed into Slovak research institutions and universities.

Although Slovakia has adopted a system of science politics similar to that in successful countries, and the EC funds provided a decent investment into science, this experiment appears to have failed. Why?

Our hypothesis is that the country’s small population, combined with cultural stereotypes, constitutes an ideal environment for the propagation of ambitious yet mediocre members of the scientific community, whose opportunistic behavior prohibits the advance of science on a national level. In Slovakia, it seems to take almost no time to corrupt a system that works perfectly fine elsewhere. A scientific oligarchy with close ties to policy makers writes the rules for the transfer of unprecedented amounts of public money into (semi-)private firms purchasing overpriced, duplicated, or even useless equipment. All this is done legally, under the supposed supervision of governmental officers. We see this as a large-scale theft of public resources that has minimal or no benefit for improvement of science in Slovakia.

Some countries of similar size to Slovakia have been much more successful in transforming their research enterprise. For example, science in post-WWII Austria was in a shambles. Today, Austria is one of the leading European countries in terms of scientific productivity. Estonia is a more recent example of a small, formerly Communist European country, whose scientific productivity is on a steep rise. Internationalization of the scientific communities of these countries is the common denominator of their success. Review panels of grant agencies and scientific boards of universities in large part consist of respected foreign scientists. The quality of research is evaluated by international experts, not by the same people who are being evaluated.

Instead of constituting Potemkin-like centers of excellence and similarly wasteful endeavors, investments in Austria and Estonia are poured into building international institutes with high-quality researchers selected by international committees. Such institutions are connected with local universities and serve as hubs for talented scientists. By learning from these examples and working more on an international scale, we might be able to prevent the fatal consequences of intellectual inbreeding taking place now in Slovakia.