Scientists in the United States and Europe have long been concerned with how well the public understands science, whether or not the media adequately covers science, and how the public reaches decisions on complex science-related policy issues. Given the norms of our profession, however, it is ironic that many of these debates about how to best communicate science with lay populations are driven by intuitive assumptions on the part of scientists rather than the growing body of social science research on the topic that has developed over the past 2 decades.

In May, more than 500 researchers, journalists, and policy professionals gathered at the National Academies in Washington, DC, for a 2-day forum on the “Science of Science Communication” to dispel some of these intuitive but persistent myths about science, the media, and the public. Here are five that relate closely to our own work in the area:...

1. Americans no longer trust scientists. Prominent scientists warn that we have entered a new “dark age,” where the public no longer trusts scientific expertise. But while it’s true that many individual institutions have plummeted in public trust over the past few decades, confidence in the scientific community has remained relatively steady and well above levels of trust in politicians, journalists, and business leaders, according to survey data compiled by the National Science Foundation.

According to a different study, however, confidence in the scientific community has dropped among conservatives, findings that the author called evidence of a conservative “war on science.” But possible causes of this decline are open to several different interpretations. Reducing the phenomenon to a single narrative therefore only harms efforts to fully understand these complex trends.

2. Science journalism is dead. Though scientists are often critical of the news media, calling attention to perceived bias on the part of journalists, they also fear that budget cuts at news organizations have meant the death of science journalism. Rather than dying, however, the nature of science journalism is rapidly evolving. As one of us (Nisbet) described in a recent co-authored study, journalists are often no longer the source for breaking news about science; scientist bloggers and university news services have taken a much larger role in that regard. But science journalists do remain the main sources for synthesis and interpretation of complex areas of research, especially as science relates to policy. Veteran journalists like the New York Times’ Andrew Revkin, for example, have begun to report as informed critics, evaluating the institution of science rather than just describing scientists’ work.

3. Entertainment media promote a culture of anti-science. Since the 1970s, scientists have feared that entertainment TV and film undermine public trust in science. Yet today, research shows that the image of scientists in popular culture is a strongly positive one. Scientists often play the hero in blockbuster movies and top-rated TV series.

Indeed, some of our own research shows that while scientists remain relatively rare characters in the TV world, when they are shown, it is almost exclusively in a positive light. Of the scientist characters currently on primetime, 81 percent were characterized as good, 26 percent as both good and bad, and just 3 percent as bad. Studies we have conducted also demonstrate that the impact of TV viewing on science attitudes is complex, varying by genre and the background of the audience member. For example, rather than cultivating public reservations, the viewing of science fiction programs is correlated with greater support for controversial areas of science such as stem cell research and food biotechnology.

4. The problem is the public, not scientists or policymakers. Scientists have long believed that when the public disagreed with them on matters of policy, public ignorance was to blame. Fill in the gaps in public knowledge, scientists assumed, and public agreement on issues such as climate change would follow. But research shows that science literacy has only a limited connection to public attitudes. Instead, trust, emotion, social identity, and how an issue is framed matter more, putting much of the burden of effective communication on scientists and their institutions.

Unfortunately, a popular preoccupation with a conservative “war on science” has distracted scientists from concentrating on knowledge gaps, instead driving them to focus on “ideological gaps.” This new outlook defines the public in simplistic, binary terms, pitting liberals against conservatives, deniers against believers. Such a perspective not only ignores large segments of the public who may be conflicted or ambivalent in their views on a topic, but can also keep academics and policy makers from exploring alternative policy approaches and communication strategies that are likely to appeal to conservatives.

5. Political views don’t influence the judgments of scientists. In debating science-related policy matters, we tend to assume that scientists are not influenced by their own political views. Yet in a recent study co-authored by one of us (Scheufele), we find that even after controlling for their scientific judgments, scientists’ political ideologies significantly influence their preferences for potential regulatory policies. As one of us (Nisbet) concluded in a second study, when turning to questions outside of their area of specialty, the role of ideology in shaping the views of scientists is likely to be magnified, especially when they try to make sense of the polarized politics surrounding issues like climate change.

The lesson is that many of the same background factors that shape the perceptions of the general public also influence the political judgments of scientists, explaining in part why several of the myths reviewed in this article linger on.

Matthew C. Nisbet is an associate professor of communication at American University and an expert panelist at the National Academies’ Sackler Colloquium on “Science of Science Communication,” held in Washington, DC, May 21 & 22. Dietram A. Scheufele is the John E. Ross Chair in Science Communication at the University of Wisconsin-Madison and DAAD Visiting Professor at the Technische Universität Dresden, Germany. He is a co-organizer of the Colloquium. 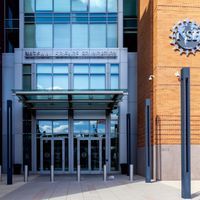