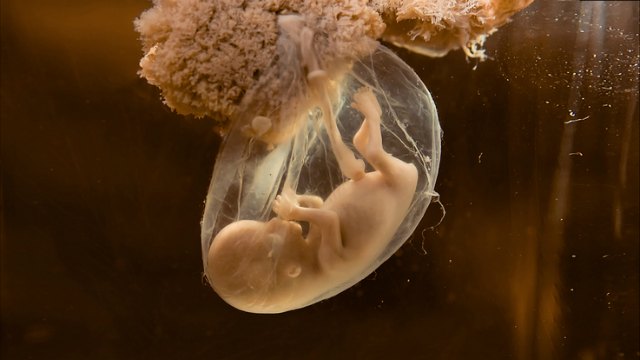 ISTOCK, LEPTOSPIRAThere are several emerging biotechnologies that raise ethical questions regarding the definition of personhood. One of these innovations is xenotransplantation, which uses gene editing (CRISPR-Cas9) and stem cell technologies to create human-pig or human-sheep chimeras that can grow human organs for transplantation. While most people understand that pigs growing human livers and kidneys could save lives, there is an ethical fear that these technologies may generate animals that incorporate human cells into their brains or sex organs—situations that require broader discussions regarding the question whether such organisms attain the status of personhood.

For example, is there a percent composition of human neurons incorporated into an animal’s brain that renders such a chimera human? Similarly, other stem cell technologies exist to create mice that produce human sperm or eggs. If human gametes from these mice are used to generate a healthy baby, would that baby be considered...

Human status and personhood have different meanings. Biologically, the term “human being” refers to an animal that genetically belongs to the species Homo sapiens. Many religious scholars include “ensoulment”—defined as the instant a human being attains a soul—as a characteristic of human status. In general, personhood denotes a set of capacities that imply both the ability to engage in certain sophisticated behaviors and an elevated moral standing deserving of certain legal protections. Specifically, many secular ethicists have described personhood using capacity-based definitions (that is, the ability to think creatively, reason, and engage in self-motivating activities; the capacity to communicate; or the presence of self-awareness). The difficulty with both religious and secular definitions of human status or personhood is that we have no established scientific methods to accurately assess these criteria.

How we define human status and apply personhood to any organism underscores a central tenet of bioethics and social justice—respecting the quality and value of life.

I would like to present a slightly different approach from the above-mentioned criteria that addresses the definitions of human status and personhood in human-animal chimeras. First, any living organism that has human status also attains personhood status. But conferring personhood does not necessarily confer human status. Second, human status is given to any individual born from a human being and/or derived from human gametes regardless of its capacity-based functions or cognitive capabilities. The extension of this criterion would be that a child born from human gametes regardless of the source of these human cells would also be regarded as human.

Thus, an embryo produced using gamete-like cells obtained from human blood or human sperm or eggs produced from a genetically altered mouse would still attain both human and personhood status. Similarly, a human embryo created in vitro from human gametes and transplanted into an artificial placenta or genetically altered animal that contains a human uterus, would still have human status. These technologies are not hypothetical—ectogenesis, or development outside the natural womb, has already been shown to preserve premature lambs, and xenotransplantation biotechnologies used to produce human-pig chimeras could be applied to other animals to generate, say, a cow with a human uterus.

It is interesting that the Bible and the Talmud (the Jewish book of Law) subtly address the role of human gametes and being born from a human as intrinsic definitions of a human being. According to the Bible, Adam, having been created by God, was not born from a human being nor created from human sperm or eggs. Thus, God had to declare this living creation as a “human being.” In addition, there is a fascinating discussion in the Talmud that examines the human status of a “Golem”—a mythical organism that looked fully human but was neither born from humans nor created from human gametes. The fact that the Golem was not born from a human and lacked the capacity to speak or think creatively, Talmudic scholars state that this Golem was not considered to be a human being.

According to Jewish and Catholic traditions, human beings are the most advanced living organisms on earth, in part because of their capacity to speak and to think creatively. While animals such as nonhuman primates or human-animal chimeras may exhibit human-like cognitive capacities, they will still be considered nonhuman animals according to both traditions. In contrast, personhood status and rights reflect society’s perception and understanding of whether an organism possesses human-like cognitive capacities. Thus, society has the right to use its moral compass to decide what animals should possess personhood status.

Another consideration for granting personhood status is the definition of “life.” Jewish thought maintains that only a living organism can attain personhood. This criterion conflicts with the decision of Saudi Arabian government officials, who recently became the first to grant full citizenship to a robot, the artificially intelligent Sophia, developed by Hanson Robotics.

Biotechnologies can elicit complex ethical challenges that need to be discussed and addressed. I believe that an animal that has been engineered with human brain cells or human neural organoids does not necessarily attain a human state. Being human requires the creation of an embryo from human gametes or being born from a human. However, a human-animal chimera that expresses basic human-based cognitive capacities or human-like behaviors (that is, advanced communication skills, the ability to override basic instincts, etc.) can be granted personhood status reflected in legal or moral rights not normally given to animals. For example, society can confer these organisms with limited autonomy and prohibit their use in clinical drug trials based on our perception of their ability to provide consent. As with other medical ethical dilemmas, personhood status of any living organism must be assessed on a case-by-case basis. How we define human status and apply personhood to any organism underscores a central tenet of bioethics and social justice—respecting the quality and value of life.

John D. Loike is Professor of Biology at Touro College and University Systems.