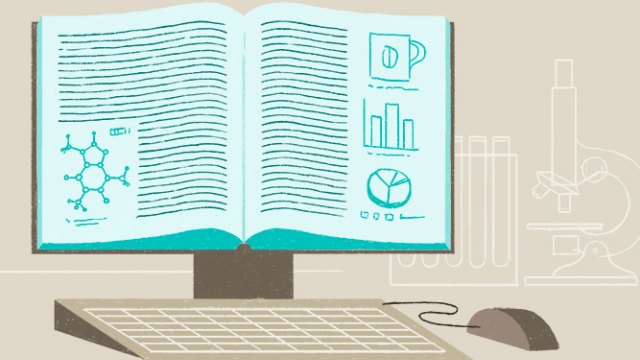 © BRYAN SATALINOIn October 1676, when Antoni van Leeuwenhoek wanted to tell the world about his discovery of protists and bacteria, he simply sent a letter—in low Dutch—to Henry Oldenburg who was editor of the Philosophical Transactions of the Royal Society of London. Oldenburg translated the letter into English, shortened it somewhat, and published it less than five months later in the March 1677 issue of the journal, thereby founding the field of microbiology (Phil Trans R Soc B, 370:20140344, 2015). In those days, publication of scientific papers (letters) was largely at the whim of the journal editor, and was typically rapid.

For the next three centuries, the process of publishing papers remained remarkably consistent for scientists: write, submit, respond to reviews or try elsewhere (repeat as needed), and develop final copy—then wait weeks, months, or even years to see your work in print. Successively, 20th-century typewriters,...

In our experience, it takes no more than 15 minutes to book a flight online, eight minutes to rent a car, and fewer than 30 seconds to buy a book from Amazon. So why does it sometimes take hours to submit a paper or a review to an academic journal?

Already this year, one or the other of us has had the following (annoying) experiences in submitting or reviewing manuscripts: passwords not working, profiles needing updating, links heading to dead ends, and documents being stored in ways that require labor-intensive methods of retrieving them. It all makes for hours of unnecessary busywork that could be better spent on science.

Although electronic submission of manuscripts and reviews has undoubtedly made life easier for journal editors, it has made life more difficult for academics. It is outrageous that the process of dealing with a scientific journal should be so time-consuming, frustrating, and tedious. Research time is simply too valuable to be wasted on such bureaucratic nonsense. 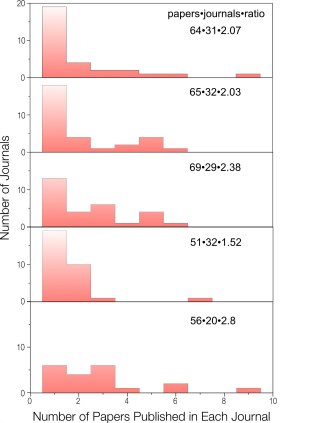 Examples of the publication profiles of five prominent evolutionary biologists from 2007-2016, tallying the number of papers published in each journal during that 10-year period.BOB MONTGOMERIE AND TIM BIRKHEADIf one complains to the journal editor, the response is always the same: it makes their lives easier, and, “It isn’t so bad once you get used to it.” But it isn’t merely a case of getting used to one system; different journals employ different systems and, anyway, the rate at which most academics submit papers to the same journal means that it is easy to forget between submissions (who wants to retain that stuff anyway?). A quick survey on Google Scholar of 10 productive colleagues shows that they each published papers in more than 20 journals in the last 10 years, meaning probably double that number of submissions due to rejections and resubmissions (the five researchers featured in Figure 1 show the full range of profiles from our sample). It does not look like any of them submit to a single journal often enough to remember the process or to keep up with the moving target of the on-line submission process. Unlike Leeuwenhoek, and even Darwin 200 years later, the modern scientist has dozens—even hundreds—of journals to choose from and rejection rates are high.

Another frequent response from editors is that it is the publishers who run the system, not them. Therein lies the problem: it is a system devised by people that don’t actually have to use it for manuscript submission. Unlike airlines, car rental companies, or Amazon, all of whom want our business, publishers know all too well that academics need them, and perhaps as a result they have made far too little effort to streamline their manuscript submission systems. If ever there was a case of the tail wagging the dog, scientific societies, journals, and authors all seem to be victims of their publishers.

We are now on the cusp of a major revolution in scientific publishing, with open access journals, data repositories, and preprint servers leading the way. But the process of submitting a manuscript for publication is no more efficient than it ever was, and it needs to be. Recent proposals for a standard (and simple) format for manuscripts are timely, wise, and useful (e.g., Nature, 543:40, 2017) but they do not go nearly far enough in streamlining an author’s workflow. Recently, the Journal of Experimental Biology, among a few others, started accepting format-free manuscripts—a step in the right direction. But too many journals require researchers to enter their information before a manuscript can be submitted. Inefficient for the authors but, we expect, efficient for the journals and their profit margins.

We suggest that there should be a common, online, centralized streamlined submission process that would serve all journals. From such a site, an author could submit (and resubmit) manuscripts with minimal redundancy and hassle.

We envision a single web page where we could submit all manuscripts for publication to any reputable journal. Each manuscript would receive a unique identifier, and the following very few boxes to fill: ORCID or ResearcherID identifier for each author, abstract, cover letter, and a short list of potential reviewers. And maybe a few tick boxes signifying author agreement, ethics, and regulatory compliance. A single PDF of the manuscript and supporting material could be uploaded and a journal chosen from a drop-down list. Presumably, such a centralized facility could also be used for distributing manuscripts for review, and would serve the added benefit of a “paper” trail for different journal editors to follow the rejection history of any manuscript, possibly even sharing reviews.

As we enter the new age of scientific publishing, let’s make the process of bringing our work to a satisfactory conclusion much more efficient and enjoyable. Journals and societies must wake up and address this issue.

Correction (May 12): The reference in the first paragraph mistakenly cited another Royal Society journal. The Scientist regrets the error.