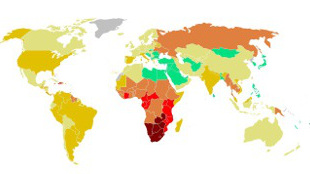 With the right drugs given at the right time, we can prevent HIV from being passed from mother to child. Despite this technological breakthrough, established in the mid-1990s, some HIV-positive women are being denied access to this potentially life-saving treatment for their infants. And it’s not due to a lack of money or healthcare coverage; it’s the result of a National Institutes of Health (NIH)-supported clinical study that is withholding such treatments for the sake of having a control group.

It’s reminiscent of a dark period in American medical history: the Tuskegee study. Conducted from 1932 to 1976, African American men in Alabama were denied therapy for syphilis with the rationale that the participants wouldn’t have access to therapy anyway. During the past decade, similar arguments have been made to withhold therapy to pregnant women infected with HIV at international research sites.

Each time a baby is infected...

Placebos offer the promise of an elegant, powerful dataset but also carry the risk of denying a patient needed medicine. The open language of our medical ethics means that every study is a balance between providing the best medical care possible and furthering our scientific understanding. Controversy arises when we tip the scale. While no researcher would withhold therapy to a pregnant woman in this country, some researchers make exceptions when applying this research to developing nations. These exceptions to our ethical safeguards have been justified by one word: context. The reasoning is that because many pregnant women in developing countries can’t afford—and therefore wouldn’t normally have access to—therapy during pregnancy, researchers are free to withhold medication in their studies. This is despite the fact that many of these studies will spend hundreds of thousands of dollars on advanced molecular biology techniques.

The most recent example is the aforementioned PROMISE trial, which is currently examining three different therapies. The most rigorous is one commonly given to HIV-positive pregnant women receiving medical care in the U.S. The other two therapies, on the other hand, would not be approved for investigation in the U.S. because they fall below this country’s standard of care. The trial is taking place in resource-limited locations in Africa and other parts of the world where access to HIV therapy is limited. Yet change is afoot; more HIV-infected women in these countries are now receiving appropriate treatment. This means that a woman participating in the PROMISE trial could receive worse medical care than if she obtained state-sponsored therapy.

Malawi, one of the clinical trial sites, suffers from a high prevalence of HIV. To combat this, in 2011 the nation’s Ministry of Health, together with key philanthropic partners [PDF], took an unprecedented step, declaring that every HIV-positive pregnant woman should receive a highly effective therapy called Option B+. The program has been wildly successful. In one year, the country went from only 1,257 HIV-positive pregnant women taking therapy to more than 10,000. In just a year, more than 7,000 babies were prevented from being born with HIV. This approach has also been shown to be cost-effective. Given this success, it’s difficult to comprehend why an ongoing U.S.-backed study would deny this transparently effective therapy.

The PROMISE trial is not the first of its kind. Another NIH-supported clinical trial, this time in Zambia, enrolled as late as 2006 and followed 1,229 HIV-positive pregnant women. Only six of these women benefitted from therapy, which was not provided by the study. Researchers measured every way that babies could die: miscarriage, stillbirth, as a newborn, and as an infant. They found that advanced HIV in the mother greatly impacts infant mortality and transmission rates. The researchers denied therapy to the developing infants, thereby exposing them to the deadly virus. Instead of spending a modest sum on antivirals, a large budget was spent on advanced molecular techniques. It would be impossible to perform these kinds of analyses on women undergoing therapy: the medication is simply too good at protecting the unborn child. No ethical review board would approve a study like this in the U.S.

The research produced by the PROMISE and other trials has greatly benefitted the scientific community. It’s given us needed insight into how HIV is transmitted and provided a peek into the unique mix of genetics and immunity that occurs between mother and child. These are insights that we can’t gain by animal studies or in cell culture. However, it is possible to gain similar, although not equal, data from retrospective studies that use archived samples, for which no one must be denied effective treatment.

The World Health Organization last year recommended that all HIV-positive pregnant women receive Option B+, citing the “important advantages” of the therapy. The recommendation has not altered the PROMISE trial. For many, this is a time to rethink how we regulate human studies of all diseases. If we are to avoid our history of wrongdoing in research, we need to start protecting the patients, no matter where they live or what their data might be worth.

Nathalia Holt is a microbiologist and author of Cured: How the Berlin Patients Defeated HIV and Forever Changed Medical Science (Dutton/Penguin 2014) and Rise of the Rocket Girls: The Women Who Propelled Us from Missiles to the Moon to Mars (Little, Brown 2016).