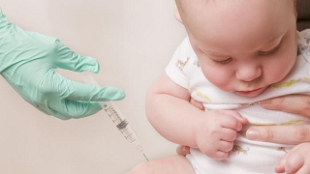 In his book The Selfish Gene, Richard Dawkins devises a population of birds to explain reciprocal altruism. In this population, there is a deadly disease that is spread by ticks. The birds can groom themselves to remove ticks, and thus protect themselves from disease, in all but one spot—the top of the head. On that spot, they must rely on other birds to remove their ticks. Thus, for the birds in this population to survive, they must work together. If they don’t, and some birds decide to “cheat” by having their ticks removed by “suckers,” but not reciprocating, the population will suffer.  As fewer and fewer birds help their peers remove ticks, the population will become overrun with disease.

Given the direct benefit to the individual of immunity against disease, vaccination, is not completely altruistic.  However, immunization provides a significant benefit to society. One can liken...

Unfortunately, we are beginning to see signs of this phenomenon, due in part to parents refusing to vaccinate their children because of the fear that it could cause autism—the now completely debunked message delivered by Andrew Wakefield in 1998.

In 2010, Idaho was ranked last in the country for routine childhood vaccination rates. Low rates have been a trend in this state for the last several years, and are likely due to limited access to vaccines as well as vaccine refusal.  According to the National Immunization Survey, Idaho has only a 63.7 percent vaccination rate for the early childhood vaccination schedule (aged 19-35 months). These rates of vaccination are nowhere near the 85-95 percent levels required for herd immunity protection against most diseases. Unfortunately this means many children in Idaho are running the risk of diseases like pertussis, measles, and meningitis.  And Idaho is not alone; other states, such as Montana, New Jersey, and Utah, also report low rates for early routine vaccinations. These rates are lower than some developing countries, and while overall childhood vaccination in the United States remains reassuringly high (levels at 90 percent or higher on average), these pockets of vulnerability are very concerning to public health officials.

Indeed, we are already seeing evidence of disease reemergence. In 2000, there was no endemic transmission of measles in United States, and this disease was declared eliminated. However, measles is one of the most transmissible diseases on earth, requiring vaccination rates of higher than 95 percent to achieve herd immunity. And in 2011, the country had more than 200 cases, many of which were imported from Europe, which is currently experiencing large measles outbreaks, with over 26,000 cases in 36 countries, as reported by the World Health Organization. Whooping cough is also on the rise. From January to October 2010, there were 455 infants hospitalized in California and 10 deaths due to Bordetella pertussis, the highest number of cases in over 60 years, according to the Centers for Disease Control and Prevention.

Parental refusal has contributed to this increase in disease transmission.  It is clear that Andrew Wakefield’s work, though it has been thoroughly debunked and removed from the literature, is far from forgotten.

As a scientist I recognize that we are not always the best communicators. When it comes to vaccines, this is particularly relevant. It is not enough to make safe vaccines that protect people from disease; we must convince the public that they are safe and effective. This may be a tall order given the current cultural climate, but one that is imperative for immunization programs to be effective. Showing data and statistics that refute claims by detractors does not do much to stop the spread of fear about vaccine safety.  However, there are real lives that are saved by vaccines, and information about vaccine-preventable diseases may be the best way to inform. Among the many differences between us and the tick-pickers is that we are capable of seeing the future and the need to protect the population. Even if this means we have to go against individualism and act a little bit like a sucker.

Juliette K. Tinker is an assistant professor in the Department of Biological Sciences at Boise State University.